On Wednesday 21st November 2018, to an exclusive delegation of over 120 influential people involved in the drone industry, Altitude Angel, NATS, Manchester Airport and our delivery partners collectively and successfully staged “Operation Zenith”: the most comprehensive demonstration of a UTM platform’s ability to unlock the full potential of drones.

From all around the world, delegates travelled to the prestigious Royal Aeronautical Society in London to see first-hand how deploying Altitude Angel’s Guardian UTM Airspace Management Operating System enables, in a single place and at a single point in time, a wide range of commercial and recreational drone operations, all safely integrated into everyday operations, even around and on the runway of a major international airport.

A critical function in any UTM solution is to provide visibility of who is currently in the sky and where. This includes both traditional (manned) air traffic, as well as unmanned traffic. Previous industry demonstrations have fallen short of being able to do this at such a scale because they rely on hardware modules and software which cannot be easily integrated into existing drones and control systems or have demonstrated only a single method of tracking drones which is not sufficient.

GuardianUTM O/S is designed to circumvent such limitations by enabling Air Traffic Control, software developers, drone manufacturers and drone pilots to easily integrate the UTM platform into their operations, as is evidenced by the sheer breadth of partners who took part in Operation Zenith.

“The level of collaboration was very impressive. It sets a new standard. It’s a big step forward towards the commercial implementation of UTM – we need this!”. 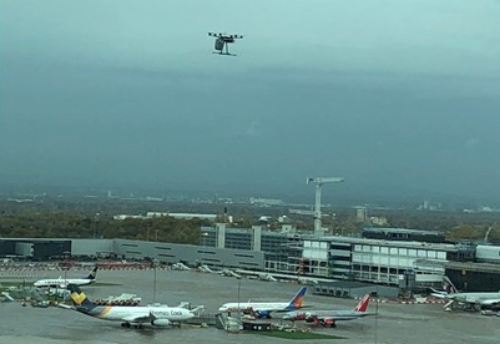 Staged at Manchester Airport in the UK and comprised of eight comprehensive and realistic scenarios, delegates saw GuardianUTM O/S provide all parties with a real-time “moving map” of all aerial activity, which the UTM system also uses to send advance warning to nearby highly-automated drones or to the pilots in charge of them to help them safely operate in close proximity. All the while, the UTM system was fully integrated into the air traffic control tower at Manchester Airport, providing air traffic controllers with a detailed view of all approved and unapproved activity.

“Interoperability is key for the future success of ATM and UTM integration, and Altitude Angel is pioneering this concept through its GuardianUTM O/S. Frequentis is pleased to be part of such a powerful real-life demonstration, underlining how existing and proven ATM-grade solutions converge into a unified traffic management concept”.

In busy air-traffic environments, particularly in sensitive areas like airports, the ability to identify the presence of a ‘rogue’ drone (one which is not cooperating in the UTM) is widely regarded as a factor blocking the expansion and roll-out of national UTM capabilities. In Operation Zenith, Altitude Angel demonstrated how its UTM platform works in harmony with connected drone-detection systems to mitigate the risks caused by a rogue drone entering the path of landing aeroplanes.

“We are delighted to have partnered with Altitude Angel to showcase the capabilities of our remote ID drone detection system through its integration into GuardianUTM O/S, and were impressed with the depth and breadth of capabilities they demonstrated in Operation Zenith”.

Consequently, GuardianUTM O/S is now demonstrably the class-leading UTM solution and it has generated a lot of excitement in the industry. GuardianUTM O/S is now being deployed by NATS, the UK’s main air navigation service provider, who will be utilising it as its national UTM operating system in production from December 2018, to provide fair and equitable access to the airspace for all.

Richard Parker, Founder & Chief Executive of Altitude Angel, said the company “is unique in its approach, acting as a ‘middleware’ layer between existing, deployed systems in the aviation industry, and forthcoming systems and standards in the drone industry.

“Our ability to utilise existing ATM networks and systems, and blend those with the ultra-modern and emerging drone industry, coupled with our automated ‘air traffic control for drones’ technologies means that more of the skies can be opened up for commercial exploitation, especially when this technology is deployed nationally as the foundation of a new national UTM offering.

We were delighted with the performance of GuardianUTM O/S in Operation Zenith and would like to thank all of our operational and delivery partners for helping us to realise our vision to demonstrate Tomorrow’s Skies Today.”