UDRI Tests Impact of Drone on Aircraft at High Speed

When a large military helicopter collided midair with a small quadcopter last year, the helicopter sustained only minor damage and returned safely home; the drone was destroyed. But tests performed at the University of Dayton Research Institute show that bigger may not always be better in contests between manned aircraft and even small UAVs.

In a test designed to mimic a midair collision at 238 miles per hour, researchers in UDRI’s Impact Physics group launched a 2.1-pound DJI Phantom 2 quadcopter at the wing of a Mooney M20 aircraft. The drone did not shatter on impact, but tore open the leading edge of the wing as it bore into the structure, damaging its main spar. “While the quadcopter broke apart, its energy and mass hung together to create significant damage to the wing,” said Kevin Poormon, group leader for impact physics at UDRI.

Poormon, whose group routinely performs sponsored bird-strike testing of aircraft structures—such as wings, windscreens and engines—presented test results and video of the drone shot at the fourth annual Unmanned Systems Academic Summit, held in August at Sinclair College’s Conference Center and its National UAS Training and Certification Center in Dayton.

As the number of hobby drones in the air dramatically increases, so does the risk of a catastrophic event, Poormon said. “We’ve performed bird-strike testing for 40 years, and we’ve seen the kind of damage birds can do. Drones are similar in weight to some birds, and so we’ve watched with growing concern as reports of near collisions have increased, and even more so after the collision last year between an Army Blackhawk helicopter and a hobby drone that the operator flew beyond his line of site.

Although the helicopter returned home with only minor damage to a rotor, Poormon said it is only a matter of time before a drone strike causes more significant damage to a manned aircraft. 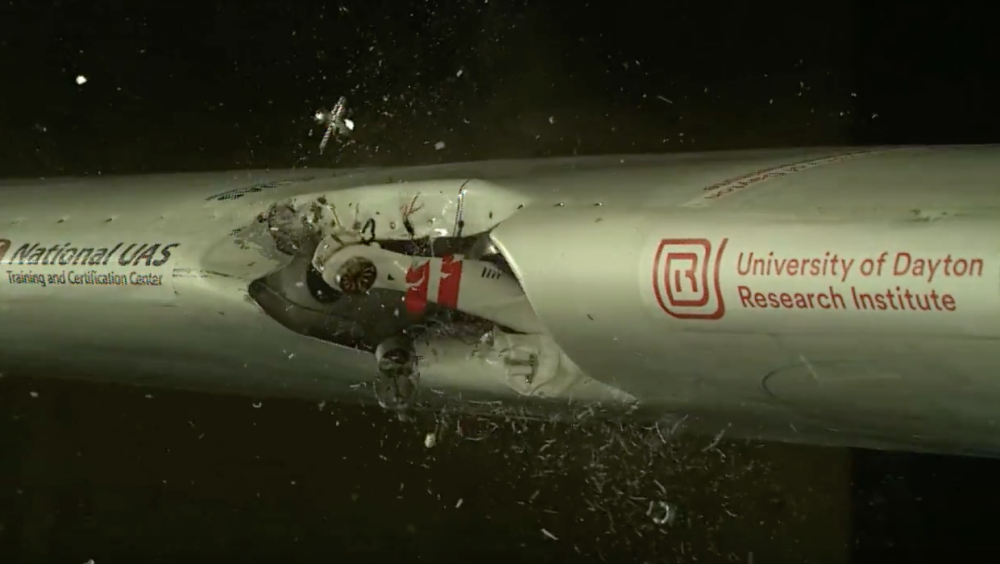 “We wanted to help the aviation community and the drone industry understand the dangers that even recreational drones can pose to manned aircraft before a significant event occurs. But there is little to no data about the type of damage UAVs can do, and the information that is available has come only from modeling and simulations,” said Poormon, whose group has fired individual drone batteries, cameras and motors at metal panels. “We knew the only way to really study and understand the problem was to create an actual collision, and we’re fully equipped to do that.”

Poormon and his team collaborated with the Sinclair College National UAS Training and Certification Center, whose experts provided guidance on unmanned aerial systems. “We’re fortunate to be in close proximity to Sinclair’s nationally renowned UAS Center,” Poormon said. “We’re experts on bird strikes, but Sinclair’s team provided valuable insight on how these systems are being used and helped us determine the best models for testing.” In addition, Sinclair provided quadcopters for testing and, because the college also offers a program in airframe aviation maintenance, loaned UDRI an aircraft wing to serve as a target.

After calibration work to ensure they could control the speed, orientation and trajectory of a drone, researchers fired a successful shot at the Mooney wing. The researchers then fired a similarly weighted gel “bird” into a different part of the wing to compare results.

“The bird did more apparent damage to the leading edge of the wing, but the Phantom penetrated deeper into the wing and damaged the main spar, which the bird did not do.”

Poormon said additional tests using similar and larger drones on other aerospace structures, such as windscreens and engines, would provide critical information about how catastrophic a collision would be. He and his team are hoping even this first test result will help bring awareness to the manned and unmanned aviation communities about the importance of regulations related to safe drone operating.

“It’s not practical to regulate manned air vehicles to try to avoid collisions with a quickly growing population of drones, but it is practical to regulate UAV operation, Poormon said, adding that the FAA already has a number of regulations in place for drone operators. There are other factors that could be looked at related to UAV production that could help enhance safety, such as building drones to be more frangible—meaning they’ll shatter more easily on impact—or keeping them under a certain weight limit could also enhance safety, he said. “The shipping industry is already investigating ways to use drones for package delivery. That would require larger and heavier drones which, when combined with the weight of a package, could easily outweigh a Canada goose, known to do significant damage to aircraft.”

Andrew Shepherd, executive director and chief scientist at Sinclair’s National UAS Training and Certification Center, said the emergence of unmanned aerial systems in the civil and commercial markets is projected to be a significant driver of economic activity and is already providing value across a number of industries.

“This type of testing shows that we recognized the potential risks and are seeking to better understand them and positively influence policy and operations to mitigate possible dangers,” Shepherd said. “Collaborating with UDRI’s leading experts and world-class testing facilities helps us fulfil our mission to not only advance technologies for unmanned aerial systems, but to make the skies safer for manned and unmanned vehicles alike.”

Poormon said his team is not aware of any other lab in the country performing controlled drone strikes on structures for research or data generation.

About the University of Dayton Research Institute Impact Physics Lab:

UDRI operates the most diversified impact physics laboratory in the world, with 12 gun ranges capable of propelling objects at velocities ranging from tens of feet per second to more than 33,000 feet per second. Researchers routinely perform research and testing in the fields of foreign object damage, light armor design and evaluation, penetration mechanics, hypervelocity impact testing and analysis, and dynamic behavior of materials.

About the Sinclair College National UAS Training and Certification Center:

Sinclair’s National UAS Training and Certification Center represents the culmination of a focused vision dedicated to creating the most comprehensive and pioneering facility and resources for the advancement of unmanned aerial systems (UAS) technologies. Since 2008, Sinclair College has been at the forefront of UAS innovation, creating partnerships, developing leading curriculum, and investing significantly to establish a nationally prominent program dedicated to meeting the workforce needs of the growing UAS industry.