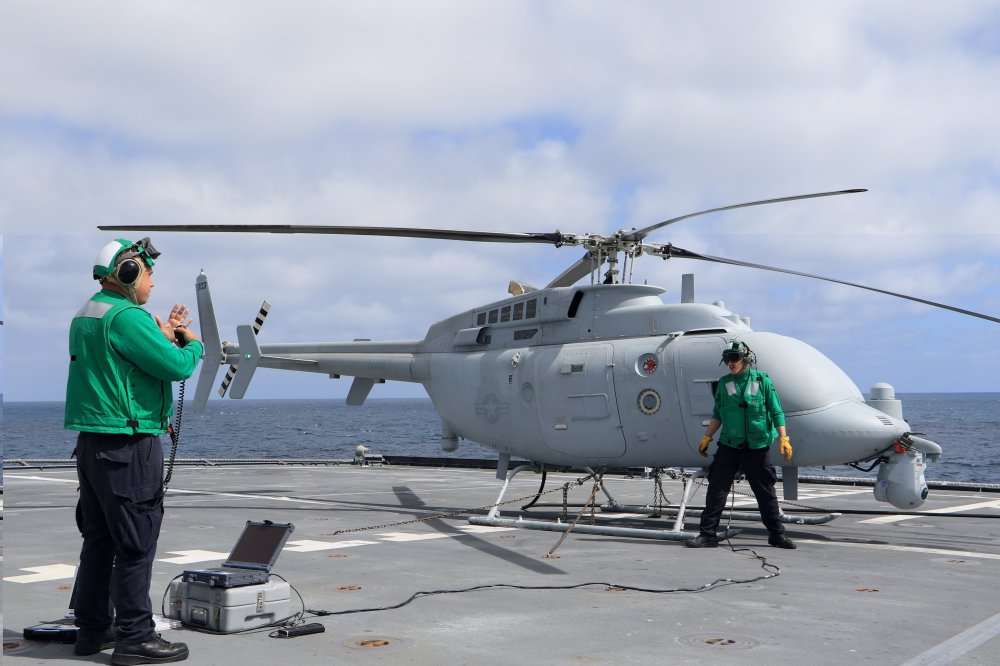 The work saw the rotorcraft coordinate with a small robotic surface ship and unmanned submersible at the US Navy’s Advanced Naval Technology (ANTX) exercise from 29-31 August, according to Northrop.

The MQ-8C Fire Scout served as a communications relay and situational awareness platform for the surface ship and submersible, which were hunting and relaying information about the locations of sea mines.

Due to Federal Aviation Administration restrictions the Fire Scout was manned and piloted. The pilot flew the helicopter based on waypoint instructions from the aircraft’s automated system. The rest of the aircraft, including mission systems and sensors, where operated completely autonomously.

“The goal is to increase the efficiency between the man and the machine,” said Dan Redman, Northop’s ANTX programme manager, who noted the additional personnel requirements that often come with operating UAVs. “We have the ability to reduce the manpower.”

Another goal of the demonstration was to show that the UAV could help with the dangerous mission of mine sweeping, adds Alan Lytle, Northrop vice-president for undersea systems.

“There are certain missions where you can’t send people and this [UAV] opens up opportunities for the navy,” he says.

The Fire Scout is a Bell 407 commercial helicopter that is stripped down, stuffed with extra fuel tanks and equipped with a phalanx of sensors. The aircraft is larger and has double the endurance of its predecessor, the MQ-8B, which is a converted Schweizer 330 commercial helicopter.

Northrop executives say they do not know when the USN might begin using the Fire Scout for sea mine-hunting missions, noting that the exercise was for demonstration purposes. The service has yet to commit to using the UAV for this application.

In July, the company displayed a model of the MQ-8C at the UK’s Royal International Air Tattoo fitted with an Ultra Electronics sonobuoy mission pod. At the time, Northrop would not comment on the pairing, but the introduction of the pod appeared to indicate that the helicopter’s mission could also expand to anti-submarine warfare.