In order to minimise the damage to the system and also to possible bystanders on the ground, the Austrian company, Drone Rescue Systems, developed an intelligent parachute rescue system for the safe drone landing.

When and why was Drone Rescue founded?

Andreas Ploier (AP), CEO and co-founder of Drone Rescue Systems GmbH: Drone crashes are reported again and again in the media. In some cases television viewers have even seen these live, as with the crash of a drone behind the Austrian skier Marcel Hirscher in 2015 during the World Cup Slalom in Modonna di Camiglio. But drone crashes have also had consequences in our own personal environment. An acquaintance of ours who had a drone service company, lost two drones through crashes within two years. For him, that meant a loss of over € 30,000 and the ruin as independent entrepreneur. At the same time Markus, our CTO, had been very intensely occupied with the subject of sensors. As he has been a passionate paraglider for 20 years, he came up with the idea of developing a parachute rescue system for drones. For this reason we decided to found Drone Rescue Systems together. We have now been working on the product since 2015 and have been able to successfully build up the company with an investment and grants. In the meantime we have almost 15 employees at the site in Graz.

When one visits the company website, one quickly realises that Drone Rescue offers more than just a parachute. What is the overriding product philosophy?

(AP): Our philosophy is “When safety matters – To be an enabler of the commercial drone flight BVLOS (Beyond Visual Line of Sight)”. The objective is to reliably enable the commercial use of drones in all areas. For this reason our system is not just a simple parachute mounted on a drone, rather with our many innovative and market-relevant renovations, we go several steps further. Let us assume the absolute worst-case scenario: The drone flies over a densely populated region and every single drone component fails at the same time, for example the flight controller, the power supply, etc. We would like to achieve, that even in this scenario, also BVLOS, the drone can be safely intercepted. With our system that is always possible, because of the completely separate electronics that are also independent of the flight controller. In addition, our system has the advantage, that it manages completely without explosive, pyrotechnical solutions. Consequently we have a system that is considerably lighter and functions even in the worst-case scenario.

Markus Manninger (MM), CTO and co-founder: In principle the rescue system is already much more than just a parachute. On the contrary, it contains a lot of electronics, including sensors, with which the flight status of a drone can be self-monitored, independent of the flight controller. A sophisticated algorithm merges this sensor data, whereby we were able to realise an automatic crash detection. Then in the event of an error, a pilot no longer needs to react and press a release button. That is often technically no longer possible, e.g. with a failure of the radio link, and not at all in such a sufficiently short time as our algorithm reacts. I.e. the system releases the parachute itself. In addition to this however, we offer other products than just an intelligent parachute rescue system. 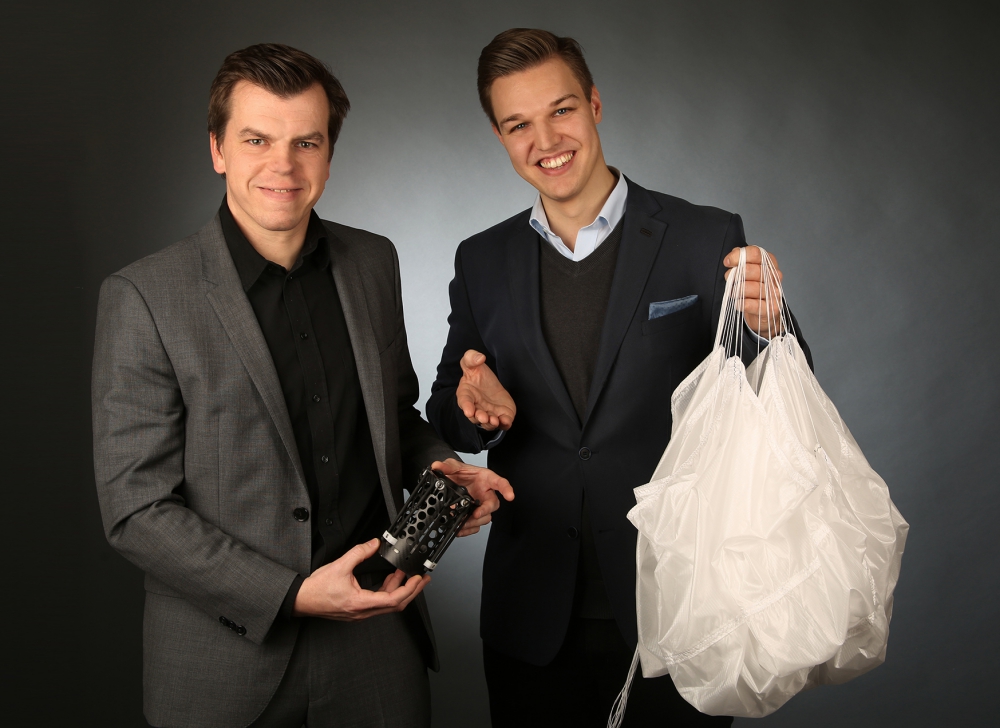 When will the first rescue systems be available?

AP: The system is available now. For the time being we are focussing on commercial drones up to 25kg.

And which drones can be equipped with the rescue systems?

AP: Practically every multicopter can be equipped with our system. We have different options as to how we integrate our system and are therefore very flexible when it comes to customer inquiries. Thereby the flight controller or whether it concerns a quadro- or optocopter is irrelevant.

Who is your target group?

AP: Our target group is all those who want to protect their payload and also the drone from damage during a crash, as well as those, who also do not want to affect bystanders in the case of a crash. We are therefore addressing end users such as drone service providers and pilots, but also the drone manufacturers themselves, who can offer our system ex works. Furthermore, due to new regulations, keyword SORA (Specific Operational Risk Assessment), we expect significant advantages for customers for permits and approvals of flights.

MM: Our target group is clearly commercially utilised drones, that are expensive to purchase and carry high-priced equipment. We see the greatest necessity in that sector. In future, with a great degree of certainty, there will also be flights beyond the range of vision and in this case an intelligent parachute rescue system is extremely important. We want to make use of this scenario right from the start. However, in principle our product can also be used by every hobby pilot.

What are the technical differences to previous parachute systems?

MM: The major technical difference is surely, that we can detect a crash automatically and react to it independent of the flight controller. Even with the failure of the power supply, our system can still reliably deploy the parachute and also do this without a further additional battery. This is a major difference to other systems on the market. There are however other advantages, such as the reliable ejection mechanism, that we have patented. As a result, following a crash the system is operational again within a few minutes and it manages without pyrotechnical propellant or CO2 cartridges. In addition to this is the extremely fast spread of the parachute following the deployment, which brings the drone to a stable flight attitude in the shortest possible time. Unique is also the low weight of the complete system in comparison to other products.

What added value do these differences offer the user?

AP: On the one hand it concerns the minimisation of the purely material damage. If a problem occurs during the flight, our system can protect the drone and the often very expensive equipment from great damage. On the other hand, our system also offers the benefit, that the liability- and insurance risk is greatly minimised. The probability, that a dramatic personal injury or material damage occurs is much less likely with our system. Consequently, the parachute system of Drone Rescue Systems also offers advantages, when it concerns flight permits and approvals. Through the link to our web platform, the user also obtains significant added values with daily use. In future, through cooperation with insurance companies, the acquisition costs may even amortise.

Are parachute systems for drones over 50kg also envisaged?

MM: Yes, whereby the focus for 2019 is on solutions up to 25 kg. Higher weight classes will follow later. We will see how far our system can be scaled without major technical modifications and want to take it one step at a time.

Drone Rescue was given an award by the European Space Agency. How did that come about?

AP: As already mentioned, with our innovative approach we go several steps further than others, when it comes to e.g. electronics, sensor systems and self-determining intelligence. For this reason we have a very strong relationship to space technologies. That enabled us to be given an award by the European Space Agency (ESA).

The parachute safety solution works autonomously and independent from the drone and ejects the parachute in a fraction of a second, enabling a safe commercial and private drone usage even over crowed places.

The main goal of our Drone Rescue products is to reduce the risk of harming people on the ground and to bring down the expensive equipment safely when it comes to a malfunction of drones up in the air.