The U.S. Army Research Laboratory’s Center for Unmanned Aircraft Systems Propulsion made an historic first with its experiment in a gas turbine combustor using X-rays. The data will help advance gas turbine engine designs for higher power density and efficiency, scientists said.
“This is the strongest X-ray source in the world,” said Dr. Tonghun Lee, an associate professor in the Department of Mechanical Science and Engineering University of Illinois at Urbana-Champaign, which recently joined forces with ARL.

Lee and his graduate students, along with partners from the ARL Center for UAS Propulsion, set up shop in the U.S. Department of Energy’s Advanced Photon Source at Argonne National Laboratory in Illinois, resulting in a unique experiment, which continued through April 11. 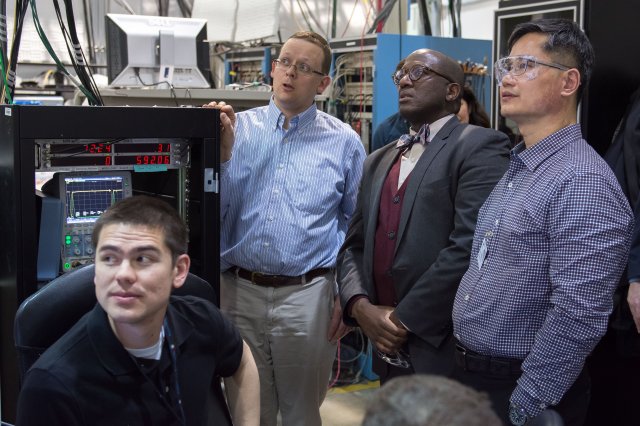 “We’re here to do spray imaging inside a gas turbine combustor as relevant to the Army,” Lee said.

Inside a gas turbine engine, a combustor is fed high pressure air that is heated by constant pressure. After heating, the air passes from the combustor through the nozzle guide vanes to the turbine, producing thrust. Combustors play a crucial role in determining many of an engine’s operating characteristics, such as power density, fuel efficiency and levels of emissions. 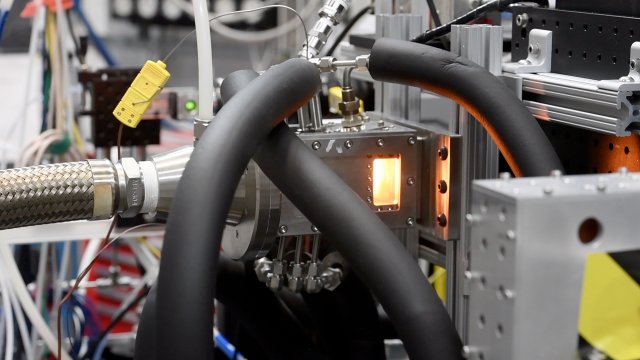 “We had a combustion going on, which is done for the first time ever at APS and we are imaging the spray breakup at the very tip of the injector using an X-Ray source,” he said. “Typically that region where the liquid breaks up is very dense and it’s difficult to image anything inside there.”

By using the world’s most powerful X-Ray source, the team was able to penetrate and understand how the ligaments, or strands of burning fuel, breaks up into small droplets.

“We are trying to understand exactly what occurs inside the gas turbine combustor to understand how it responds to different operating conditions,” Lee said.

The data gathered during this experiment will become the initial conditions for numerical simulations that will further understanding of gas turbine combustors.

“We’re trying to get an understanding of the physics, which to this day we have been speculating, we can really visualize using this X-Ray source,” he said. “We want to understand what we’re doing right now, understanding the fuel impact. When Soldiers are off in a different location and they have different types of fuels, how will it impact the combustor they have?”

The professor said in the slightly longer term, he hopes the data from the experiment will allow researchers to design more optimized combustor systems for the future.

“The Advance Photon Source has spent a lot of effort over the last decade or so looking at spray-droplet breakup. And never has it been done in a live combusting environment,” Lee said. “So we made the hardware to make it happen and this is actually this first time it’s ever been done live with a combusting flow in a combustor.”

Lee, while remaining a faculty member at UIUC, recently accepted an additional position as a researcher on the laboratory’s regional office in Illinois, ARL Central. The Army established ARL Central in November 2017, as an extension of its Maryland-based headquarters with the goal of leveraging regional science and technology talent.

“It was great to see a team of ARL, UIUC and Argonne researchers working together with the unique capability at the Advanced Photon Source to gain unprecedented insight into the fuel injection and combustion process,” said ARL Central Regional Lead Dr. Mark Tschopp. “It was so exciting to see this novel experiment firsthand because it symbolizes what ARL Central is all about — partnering to accelerate discovery and innovation for future Army applications.”

The experiment was the first accomplishment of the lab’s new Center for UAS Propulsion, which kicked off a massive partnership between academia and industry. ARL held a ribbon cutting for the center April 2.

“I am so pleased to perform this historic experiment right after the ribbon cutting ceremony for Center for UAS Propulsion,” said center founder Dr. Chol-Bum “Mike” Kweon, who also serves as the lab’s Propulsion Division chief. “I was thrilled watching the quality of the spray breakup processes in the gas turbine combustion in real time, which is extremely difficult to measure at this quality.”

“Research partnerships through the newly established Center for UAS Propulsion, such as the one we witnessed at Argonne National Lab, will make these breakthroughs possible in support of the Army modernization priority for Future Vertical Lift ,” he said.