China in Race for C-UAS Tech and Laser Weapons

China is moving to develop laser weapons and counter-drone systems as it tries to catch up with the United States on unmanned aerial vehicle technology to boost its intelligence and attack capabilities, according to military analysts.

That includes systems to protect its drones so that they are less vulnerable to lasers and spoofing techniques that send false information to UAVs. One system under development is Silent Hunter, a portable drone-killing laser weapon that is said to have a firing range of up to 4km and was demonstrated at a defence conference in Abu Dhabi in February.

Poly Technologies, the company behind the Chinese counter-drone system, said it could pierce five layers of 2mm-thick steel plates from a distance of 800m, or 5mm plates from 1km away 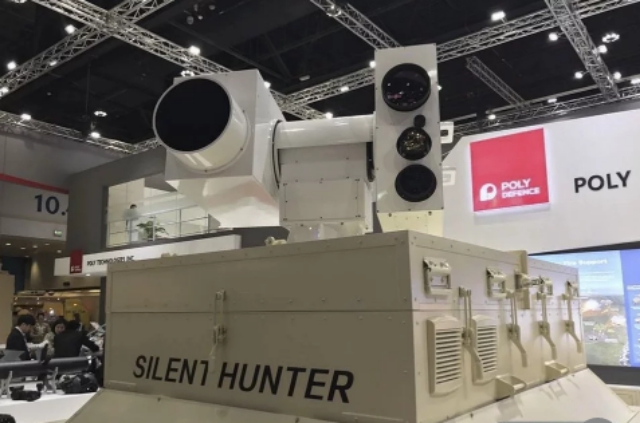 Silent Hunter, a portable drone-killing laser weapon, is said to have a firing range of up to 4km. Photo: Huanqiu

But experts say the US anti-drone systems are more advanced than China’s, and they have a bigger range and more types of sensing technology available from a greater number of companies.

The US has more than 60 counter-drone systems or products that use radar, radio frequency, electro-optical and acoustic detecting and tracking to intercept enemy drones and either stop them, hijack their communication link or destroy them with lasers or projectiles, according to a report by the Centre for the Study of the Drone at Bard College in New York in February.

Its latest acquisition is a high-power microwave counter-drone system, which the US Army earlier this month said it planned to buy from Lockheed Martin, according to the company’s website. The system is a laser weapon that is carried by an aircraft and can shoot airborne drones, and has more attack power than ground-based or handheld weapons.

China, meanwhile, has less than 20 such systems and mainly relies on conventional means like radar to detect drones – and it does not have any spoofing or nets to counter incoming UAVs, according to the report and mainland media. Jamming systems appear to be the most popular way to counter drones in China.

But analysts say China is starting to catch up, with a number of companies and institutions joining the race to research counter-drone technology, including China National Nuclear Corporation, NovaSky and the Beijing Institute of Technology.

New systems might not be publicly announced or demonstrated though, according to Kelvin Wong, an aerospace analyst with IHS Markit.

“I believe that there are many more state-owned and private Chinese firms as well as research institutions that have enter the counter-UAS [unmanned aircraft system]/UAV market,” Wong said.

Arthur Holland Michel, from the Centre for the Study of the Drone, said those in the race all had a chance of coming up with the next big thing in counter-drone systems.

“Given that we are talking about an emerging technology, it is plausible that a small start-up might come up with a brilliant solution that completely dominates the market – the way that DJI, a Chinese start-up, has become a market leader in the consumer drone sector,” he said.

Brett Velicovich, a US army veteran and drone expert, said the industry was making such rapid advances that no single weapon would be 100 per cent effective against every type of drone in every situation – the technology simply could not keep up, and that was a challenge everywhere.

“The problem largely comes from the fact that the current state of drone technology is moving at such a rapid pace, that these counter-drone systems are nearly obsolete by the time they are tested, ” he said.

Velicovich added that the best approach was a multipronged strategy combining different interception techniques. He said acoustic detection – where a drone is picked up by its unique sound, triggering a system to eliminate the threat – was one area where more research was needed.

WAYS TO INTERCEPT A DRONE

Disrupts the radio frequency link between the drone and its operator by generating large volumes of RF output. Once the RF l

ink is severed, a drone will either descend to the ground or return home.

Disrupts the drone’s satellite link, such as to a GPS (global positioning system) or GLONASS (global navigation satellite system). Once the navigation direction is lost, a drone will hover, land or return home.

The drone’s communications link is hijacked to take control of it.

Destroys vital parts of the drone, causing it to crash to the ground.

Entangles the targeted drone and/or its rotors.

Ammunition – regular or custom-designed – is used to break or destroy an incoming unmanned aircraft.

Top photo: The developer of counter-drone system Silent Hunter said its beam can cut through five layers of 2mm-thick steel plates from a distance of 800m, or 5mm plates from 1km away.