A drone attack caused pandemonium at a military ceremony where President Nicolás Maduro of Venezuela was speaking on Saturday, sending National Guard troops scurrying in what administration officials called an assassination attempt.

The president, who was unharmed, later told the nation, “To all of our friends in the world, I am fine, I am alive.” He blamed right-wing elements and said, “The Bolivarian revolution keeps its path.”

Mr Maduro has blamed Colombia for the attack – something denied by Bogota as a “baseless” accusation.

Seven soldiers were injured, and authorities detained six people suspected of using explosives-laden drones in a failed bid to assassinate Venezuelan President Nicolas Maduro, officials said Sunday, in what one witness described as a terrifying attack that shook her apartment building.

The government alleged that opposition factions conspired with assailants in Miami and Bogota, although they offered no specific evidence. Opposition leaders decried Maduro for broadly singling out his political opponents, and they warned he may use it to further suppress his critics.

The assailants flew two drones each packed with 1 kilogram (2.2 pounds) of C-4 plastic explosive toward Maduro, his wife and other top leaders as he spoke Saturday evening at an event celebrating the 81st anniversary of the National Guard, said Interior Minister Nestor Reverol. One of the drones was to explode above the president while the other was to detonate directly in front of him, he added.

But the military managed to knock one of the drones off-course electronically and the other crashed into apartment building two blocks away from where Maduro was speaking to the hundreds of troops, Reverol said.

“We have six terrorists and assassins detained,” Reverol said. “In the next hours there could be more arrests.”

Of those arrested, Reverol said two had previous run-ins with the government, although he did not give their names or say what charges they faced. One took part in 2014 protests that rocked the nation as it descended into an economic crisis that is now worse than the Great Depression. The other had a warrant out for his arrest for participating in an attack on a military barracks.

Smoke damage outside an apartment complex in Caracas where an allegedly armed drone crashed, causing a fire to start. Photograph: Ariana Cubillos/AP

Investigators continued searching a blackened apartment building near the site while also seizing vehicles and raiding more than one hotel where they said they had found “film evidence.”

Two witnesses who live in nearby apartment buildings said they saw a drone hovering over a residential street Saturday evening and then heard an explosion.

One witness showed The Associated Press cellphone video of a drone crashing into a building. He said the drone fell to the ground and exploded, igniting a fire in an apartment.

Another witness, Mairum Gonzalez, described running in panic to her fifth-floor balcony, where she heard the second explosion and saw smoke rising.

“It was so strong the building shook,” she said. “It terrified me.”

What is known about the alleged attack?

The incident happened when Mr Maduro was speaking at an event to mark the 81st anniversary of the national army.

Mr Maduro later said in a national address: “A flying object exploded near me, a big explosion. Seconds later there was a second explosion.”

Mr Maduro accused neighbouring Colombia and elements within the US of instigating “a right-wing plot” to kill him.

He added that he had “no doubt” Colombian President Juan Manuel Santos was “behind this attack”.

The Venezuelan leader, who has previously accused the US of plotting against him, provided no evidence to back his claim.

The Colombian government has denied any involvement, saying there is “no basis” to Mr Maduro’s allegations.

By contrast, Mr Rodriguez accused Venezuela’s right-wing opposition of carrying out the attack.

“After losing the vote, they failed again,” Mr Rodriguez said.

He was referring to May’s presidential elections, where Mr Maduro was re-elected for another six-year term. 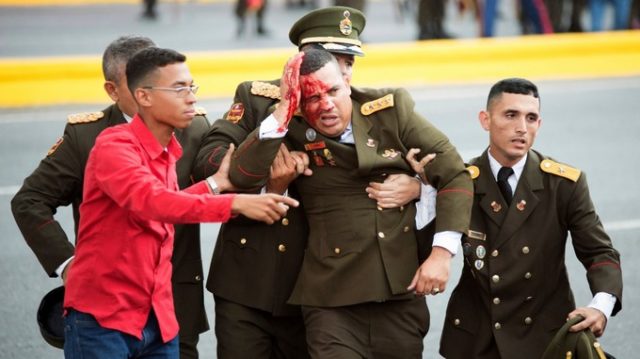 A uniformed official bleeds from the head following an incident during a speech by Venezuela’s President Nicolas Maduro. Credit: AP

However, Hasler Inglesias, a youth leader with the opposition Voluntad Popular Party, told the BBC: “We didn’t know what was happening. It’s hard to believe that the opposition is going to make an attempt when they have never made an attempt in this way in 20 years.” 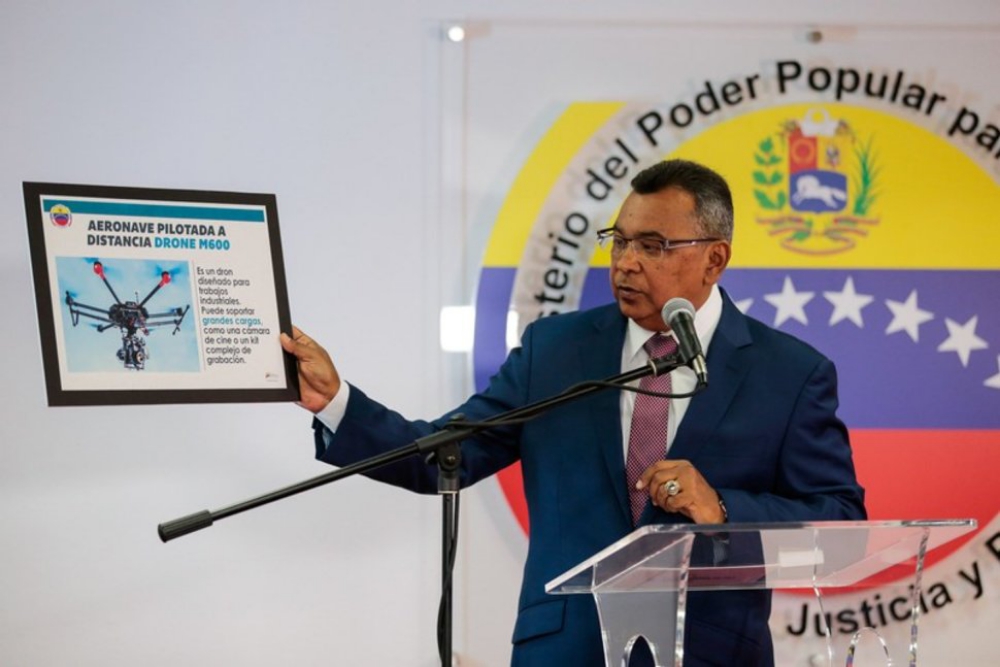 Meanwhile, a little-known group called Soldiers in T-shirts said on social media that it was behind the alleged attack.

It said it had planned to fly two explosives-laden drones at Mr Maduro, but they were shot down by the military.

The claim was not backed up by any evidence, and the group did not respond to media requests for comment.

To add further to the confusion, firefighters at the scene disputed the government’s version of events, the Associated Press reports.

Speaking on condition of anonymity, three of them said the incident was actually a gas tank explosion inside an apartment, but did not provide further details, the news agency says