Michigan-based Great Lakes Drone Company is one of only three companies in the U.S. approved by the FAA to perform lighted drone shows. The company has four stock shows ranging from 25 to 100 drones as well as shows it customizes for customers.

At EAA AirVenture the company put together part of a stock show on the history of flight and customized it to AirVenture officials’ requests. Great Lakes Drone Co. began working with AirVenture last December, acquiring the necessary FAA permits and designing a show.

“We’re opening a lot of doors here that have never been opened before,” said Matt Quinn, Great Lakes Drone Co. director of operations. “Never in the history of North America, that any of us know about, have drones been let out of the cage and integrated with an air show performance.”

In case anyone hasn’t noticed — lighted drone shows are hot. Time magazine’s June 11 cover featured 958 drones with red and white lights to create the iconic red border and “Time” in a California sky. The cover story featured the headline “The Drone Age.”

More than 1,000 drones created the Olympic rings for the opening ceremony in February of the Pyeongchang, South Korea, Winter Olympics. Lighted drones even upstaged Lady Gaga during the 2017 Super Bowl halftime show. 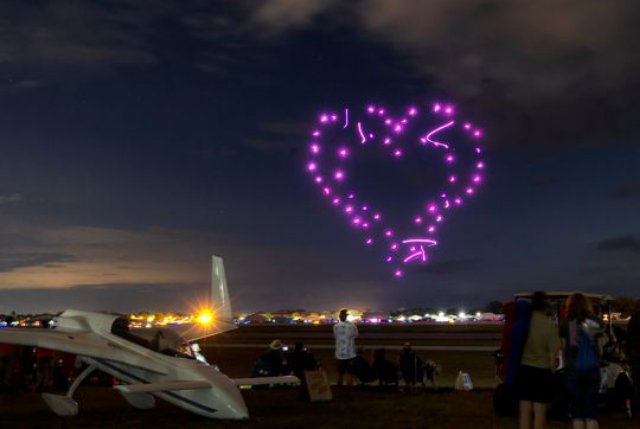 At AirVenture where all aspects of aviation from vintage biplanes and World War II bombers to homebuilt aircraft and the latest military and civilian jets are on display, it was a first.

It’s very new for us and new for the air show community,” said AirVenture spokesman Dick Knapinski. “There has never been a (FAA) waivered air show with a lighted drone air show in the midst of it.”

When AirVenture opened a dedicated pavilion and flying area for drones three years ago, unmanned aerial vehicles had finally reached the point where they were no longer used only as military weapons and high-tech expensive cameras. Prices became affordable and drones could be easily flown with cellphone apps. More than 1 million drones are now registered with the FAA for use in America.

Now drones can be used like paint brushes on night sky canvases.

Each drone is programmed with predetermined flight paths to create images. The show is coordinated through one computer system that talks to each drone to make sure they’re doing what they’re supposed to be doing.

Great Lakes Drone Co. used 60 custom-built one-foot by one-foot drones each weighing 3 pounds. Each drone shines up to 7,000 lumens in brightness. Just like the air show performers who must stay within a physical space to ensure safety for spectators, the lighted drone show was programmed to stay within the invisible box.

This summer a couple of municipalities in drought-stricken California booked lighted drone shows because of the danger posed by errant fireworks starting grass fires.

“Unlike fireworks, which are cool, sparkly things with different noise aspects you can time to music, drone light shows are really more about telling a story,” said Quinn. “We work with clients about their vision and the story they want to do, creating the shapes and changing colours.”

Unlike fireworks, though, which can be shot off in all types of weather, drones are more delicate. They don’t fly in rain and need fairly calm conditions. Quinn said his company’s drone shows can operate in winds up to 19 mph.

“Once this show happens, it will blow up. Obviously everyone has seen the Intel shows (at the Olympics and Super Bowl) but this show is breaking down a barrier,” said EAA business manager Nick Malouf. “It’s been done in airspace but never in an air show. I think you’ll start to see them at smaller air shows.”