Several Pendleton residents question what it was they saw in the skies over the town Wednesday morning for the better part of an hour. Virgil Bates Jr. and Tonia Smith were part of the road construction crew at the intersection of Southwest Nye and Marshall avenues when around 9 a.m. they spotted a small white object floating hundreds of feet above the south area of Pendleton.

Smith said she thought it was a kite, and Bates speculated it was a plastic shopping bag. Bates said his curiosity grew when he looked back up minutes later and the thing still was there.

Bates used his smart phone to zoom in and take photos and video of the object.

“Check it out,” he recalled saying. “It’s not moving. It’s staying in one spot.”

Bates said the object did not behave the way a bag would in the wind. He said it was large enough to view from miles away and the underside was in shadow. Smith said she saw the object move a bit one way, then move the opposite and come back to the original spot. 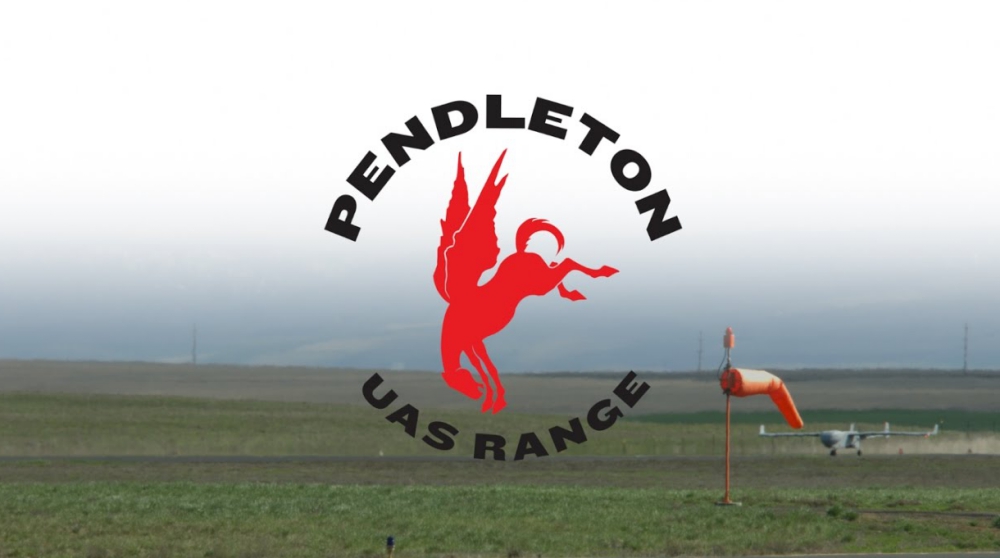 Pendleton’s Eastern Oregon Regional Airport in the northwest section of town is home to the Pendleton UAS Range. Darryl Abling, the ranger manager, reported Project Vahana tested one of its craft at 8:30 that morning for a five-minute hover about 25 feet off the taxiway. Otherwise, he said, nothing else flew on the range.

Ann Adams is an assistant forecaster with the National Weather Service near the airport. She said several sites in Oregon and Washington launched weather balloons, but not Pendleton. The Weather Service and other agencies, including the U.S. Forest Service, sometimes launch smaller pilot balloons or “pibals” to observe the cloud ceiling as well as wind speed and direction. Pibals are about the size of a beach ball and often red.

Adams said as far as she knew, the Pendleton staff did not launch balloons of any sort Wednesday.

Chinook helicopters and a C-130 military transport plane flew Wednesday out of the Oregon Army National Guard base at the airport, and Army paratroopers with the 160th Special Operations Aviation Regiment out of Joint Base Lewis-McChord, Tacoma, also were in the air over Pendleton.

Paratroopers sometimes use balloons and balloon-like devices to judge wind speed and directions before jumping. Those devices often are orange.

Bates said the situation grew stranger when a second similar object came into view and drifted down beside the first. Then one object zipped off in a straight line over McKay Creek drainage east of Pendleton.

“It just kept going until we couldn’t see it any more,” he said, and the other object seemed to disappear.

The eyewitnesses said they watched the sky show for at least an hour, probably longer.

The National UFO Reporting Center and the Mutual UFO Network — or MUFON — provide websites for people to report UFOs. Both receive hundreds of reports or more each year.

Peter Davenport operates the national center from his home in Washington and urges witnesses to take the time to write down what they observed and report sightings. He said a witness from Pendleton contacted the center about Wednesday’s UFO and reported two objects and “at one point during the sighting, they appeared to move quite abruptly.”

Davenport received a report from Redmond about a UFO there Wednesday evening. That witness stated the object appeared to be a translucent white sphere with a flat bottom and “striation marks on it like that of a watermelon.” The object also contained a rectangular area beneath the center and what looked like some sort of propellers.

Davenport said he wondered if the objects might have been high-altitude, helium-filled balloons carrying a package of scientific instruments. “However, generally, those balloons are launched out of New Mexico, and Oregon is a long way for one of those balloons to drift,” he said.

Tom Bowden is the director of the Oregon chapter of MUFON. He said UFO witnesses sometimes don’t know who to call. UFOs are generally not a matter for police, the U.S. Air Force claims it does not investigate UFOs, and the Federal Aviation Administration “definitely does not want to deal with UFO reports,” he said, “and maybe they should.”

“We do our best to investigate a UFO sighting to continue to amass data on them for study,” he said. “Without data, there is nothing to study. We also have the expertise to basically weed out the reports that are explainable.”

Bowden has been involved in the study of UFOs since the 1970s, he said, and he would love to have an investigator in Eastern Oregon. MUFON asks a lot of questions about the person making the report, he said, because “the perception of the individual is very important,” and multiple witness always is better.

“Without their story, we have nothing,” Bowden said. “Even photos and video are nothing without the story behind them.”

Smith said she has seen UFOs at night, but this was her first daytime sighting. She and Bates said they had no idea what that saw, but it sure was interesting and a bit exciting.