Engineers at Beihang Unmanned Aircraft System Technology, a part of Beihang University in Beijing, are designing a drone that will be able to fly 1,500 kilometers carrying 1 metric ton of cargo.

They plan to finalize their design before year’s end and construct a prototype in 2019 for test flights scheduled to start in 2020. Mass production will begin if test flights are successful, and a drone-based delivery network is expected to take shape around 2025, said Zhang Shuo, chief designer at the Beihang technology company, in an exclusive interview with China Daily.

The yet to be named drone will be so big that if it were to carry people, it easily would hold nine passengers, according to the company.

It will be 11.9 meters long, with a wingspan of 19.6 m, and have a maximum takeoff weight of 3.6 tons. The craft will be powered by two engines and have 16 cubic meters of cargo space.

The company expects to sign a strategic partnership agreement on Thursday with logistics company Cainiao, which is controlled by Chinese e-retailing giant Alibaba Group, to jointly develop and market cargo drones, Zhang said.

“We’re targeting express delivery enterprises as major users of our drone because they are projected to be the largest users of commercial drones. We believe that Chinese couriers will like a powerful craft suitable for cross-province cargo delivery, especially in remote or mountainous regions or islands,” he said. 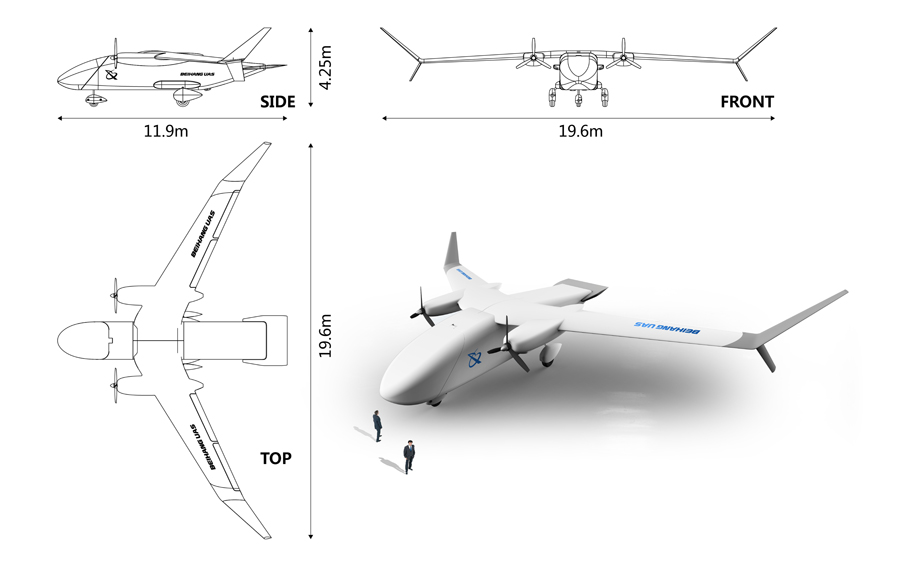 The Beihang drone will incorporate lots of artificial intelligence, enabling it to not only control itself during entire flights but also autonomously determine and cope with malfunctions, Zhang said. It will cruise at a high speed, 360 km/h, and be able to take off and land on short, rough runways.

No other mass-produced civilian drone is as big or powerful as the Beihang model. Several unmanned, solar-powered planes have a longer wingspan but weigh much less and were designed for technological demonstrations.

The world’s largest drone is the United States’ Northrop Grumman RQ-4 Global Hawk, a military surveillance craft that is 14.5 m long and with a wingspan of 39.9 m and a maximum takeoff weight of nearly 15 tons.

China has been the world’s largest express service market for four years. Couriers delivered more than 40 billion packages in the country in 2017, earning total revenue of nearly 500 billion yuan ($78 billion), according to the National Bureau of Statistics.