The UK Air Accidents Investigation Branch (AAIB) has just released a report into the crash of a racing drone that was being used for a demonstration flight at Goodwood Aerodrome in July 2019.

Whilst performing a demonstration flight, the remote pilot lost control of the 95 kg Alauda Airspeeder Mk II scale demonstrator. After the loss of control had been confirmed by the remote pilot, the safety ‘kill switch’ was operated but had no effect. The Unmanned Aircraft then climbed to approximately 8,000 ft, entering controlled airspace at a holding point for flights arriving at Gatwick Airport, before its battery depleted and it fell to the ground. It crashed in a field of crops approximately 40 m from occupied houses and 700 m outside of its designated operating area. There were no injuries.

The AAIB found that the Alauda Airspeeder Mk II was not designed, built or tested to any recognisable standards and that its design and build quality were of a poor standard. The operator’s Operating Safety Case contained several statements that were shown to be untrue.

The Civil Aviation Authority and the organisation which designed and operated the Airspeeder Mk II have introduced measures to address a number of issues identified during the course of the investigation. In addition to the actions already taken this investigation report makes 15 Safety Recommendations regarding the operator’s procedures, airworthiness standards and the regulatory oversight.

The remote pilot stated that on the day of the accident all items in the pre-flight checklist were completed successfully. This included a test of the UA’s ‘kill switch’ which was designed to electrically isolate the power supply to the UA’s four motors.

Observing the flight was an audience of around 200 invited guests, the majority of which were positioned on the roof terrace of an adjacent building. Also present were two members of the CAA’s UAS Unit who had been involved in assessing the operator’s application for the exemption .

After takeoff, the remote pilot manoeuvred the UA away from himself and the audience and flew it along Runway 32 before returning in the opposite direction. Just over a minute after takeoff, as the remote pilot was turning the UA close to the threshold of Runway 32, it levelled off. As the remote pilot had not commanded the manoeuvre, he realised that he had lost control of the UA. He immediately informed the maintenance controller, standing next to him and assigned to operate the kill switch, who then attempted to operate the kill switch. This was unsuccessful and the UA was then observed to enter an uncommanded climb.

The remote pilot instructed the audience to “take cover”, which they did by descending into the building they were on. He also informed the aerodrome’s Operations Manager, who was standing close by, that the UA had had a “fly-away” and then the Operations Manager informed the aerodrome’s Flight Information Service Officer (FISO) in the tower to advise inbound aircraft to remain clear of the Air Traffic Zone (ATZ). The FISO informed the UK air navigation service provider (NATS) of the potential for the UA to enter the controlled airspace above the aerodrome. The aerodrome’s RFFS, who were on standby in their vehicles for the flight, went to assist removing people from the roof of the building. They did not attend the scene in order to maintain the fire cover for aircraft holding outside the ATZ. 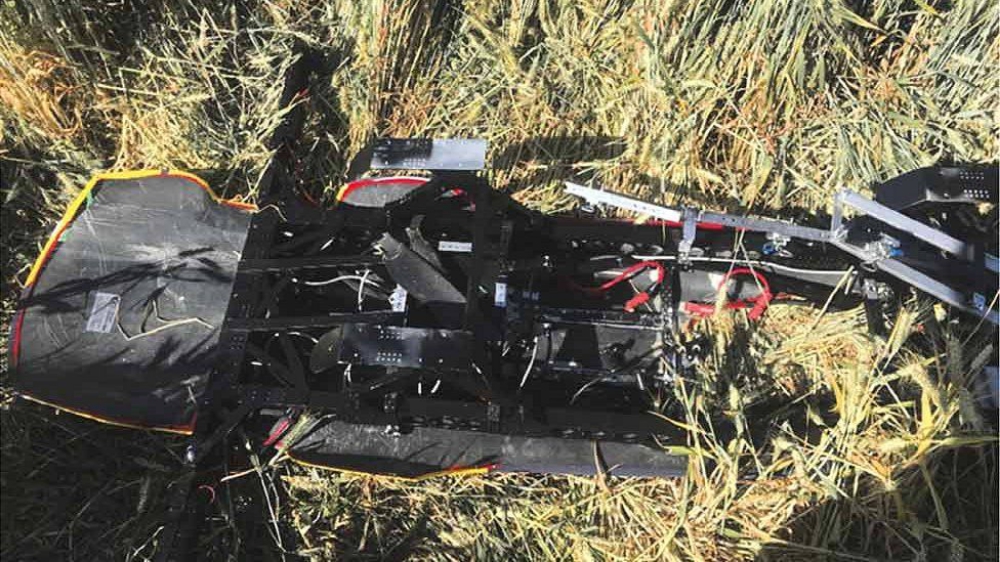 UAV as found (inverted) at the accident site

The UA continued to climb vertically and drifted in a south-south-westerly direction. After about 4½ minutes it fell, with a high rate of descent, striking the ground in a field of crops. Residents, who saw the UA crash from their garden, approached the accident site to investigate. Upon realising the size of the UA, they called the police.