The Smart Air Force Monitoring System (SAFMS) free-flight drone-in-a-box solution, along with a tethered (SAFMS-T) version, was developed by Easy Aerial and the USAF in a span of just two years. The work was done under a Small Business Innovation Research (SBIR) Phase II program and conforms to the Air Force Base Perimeter Security and Situational Awareness operational requirements.

“Easy Aerial’s unmanned aerial systems are a game-changer,” said MSgt Joshua Hicks, Travis AFB 60th SFS small unmanned aircraft system (sUAS) instructor. “This jointly developed technology will provide unparalleled security and safety for our airmen and critical assets. They will potentially save lives and will save time, effort, and resources as we continue to expand our training and operations across the base.”

SAFMS and SAFMS-T have been configured to ensure Travis AFB has options for an immediate eye-in-the-sky that can be deployed in a matter of seconds. Upon receiving a security trigger such as a fence alarm, fire alarm or other distress calls, the SAFMS can deploy from its base station automatically and autonomously navigating to the trigger site location.

The SAFMS autonomously returns to protective base station upon mission completion, where it recharges and waits for the next scheduled patrol or security-triggered mission. 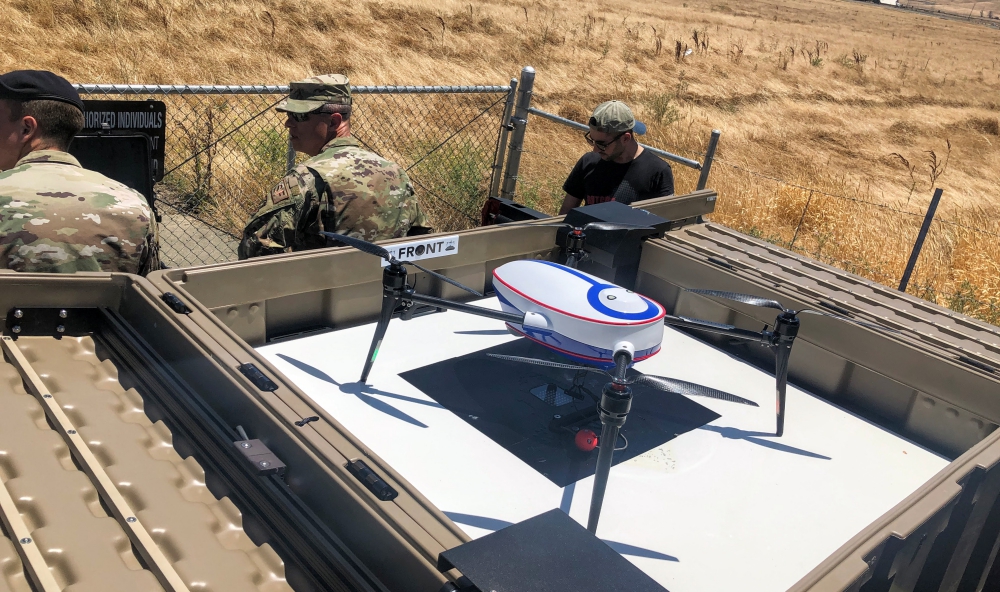 Easy Guard: A mobile, durable, and weatherproof self-sustaining base station that fully charges the SAFMS drone in as little as 35 minutes using an internal battery. Any power source, including solar, can charge the battery. SAFMS-T features a smart tether-line that maintains tension and supplies constant power and two-way communication to the drone, and is capable of unlimited flight time. To ensure precise, reliable, and sustained operations, the base station features GPS; the option of cellular, radio, or satellite communications; wind and temperature sensors; and internal and external cameras. Each SAFMS drone can take off and land at different base stations, thus facilitating constant monitoring while recharging at multiple locations.

Falcon: An autonomous high-performance drone with a modular payload system. A  durable and lightweight carbon fiber airframe enables it to carry various gimbaled payloads, including optical and IR cameras, floodlights, or speakers, for extended flight times of up to 45 minutes. Falcon’s all-weather capability enables it to fly in fog, rain, snow, and high winds without compromising its mission. 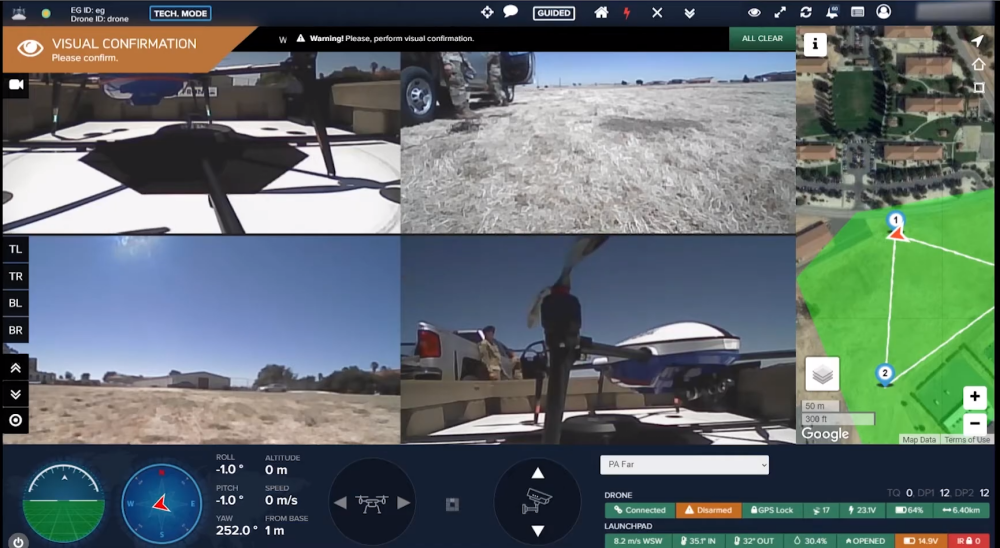 “The opportunity to partner with the USAF and UAS working group at Travis AFB has been a tremendous honour and privilege,” said Ivan Stamatovski, CTO, Easy Aerial. “I was humbled by the collective expertise, insight, and vision of this highly dedicated team without whom none of this could have been possible.”

“This was a joint effort as we worked closely together from start to finish resulting in a customized solution for the USAF that meets all of their operational desires and requirements, all while providing operational safety to the airmen and assets. Their attention to detail and identification of the operational capabilities that needed to be modified and introduced was astounding,” said Stamatovski.