The capabilities demonstrated included: remote identification services that will allow observers to identify nearby UAS, detect and avoid technology to prevent collisions, and public safety operations. Virtual collaboration for the effort began in mid-April of this year, with three weeks of live flights and component testing throughout November, pushing the boundaries of unmanned aircraft systems and enhancing Central New York’s leadership in the booming UAS industry.

More than 40 people from 13 different organizations came together, both physically and virtually, to complete the work outlined in UPP Phase Two. Mark Reilly of AX Enterprize served as the test director and technical lead for operations, directing the flow of each demonstration scenario and confirming all systems were functioning properly. Tony Basile of NUAIR acted as the air boss, overseeing safety protocols and flight paths, and instructing pilots and visual observers throughout the event.

Three weeks of testing included over 100 live and simulated flights of both manned and unmanned aircraft. The UPP2 team reached their goal of high-density urban drone operations, with a peak density of 18 aircraft (15 live and 3 simulations) in the air at the same time, within 0.2 square-miles of airspace over downtown Rome. 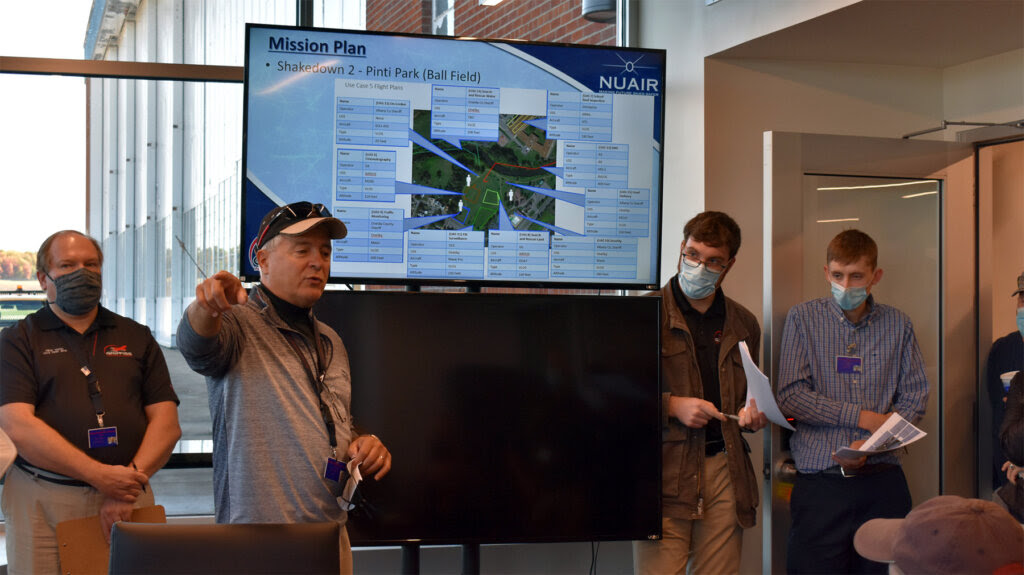 Interoperability, information sharing, and communication between UAS service suppliers (USS) were critical functions for the team to address in order to achieve these advanced, high-density operations. Much like there are many cellular service suppliers you can choose from for your mobile phone needs, the same is true for drone operators – there are many UAS service suppliers to choose from for their drone operating needs. To test this real-world scenario, where one pilot may prefer to use the AiRXOS USS, while another likes to use ANRA Technologies, the UPP2 team had to work together to make sure each system could communicate properly with the other.

Each USS, four in total (AiRXOS, ANRA Technologies, AX Enterprize, OneSky), were responsible for submitting flight plans into the collaborative system. The Test Site Operations Center includes advanced monitoring and visualization capabilities, which allowed the test director and AX Enterprize personnel to monitor all aspects of the demonstration, including both planned and active flights. These flight plans would be depicted as four-dimensional volumes of airspace and time (a 3D volume that persists for a fixed timeframe) in which they planned to fly, starting from the ground, and reaching up to their maximum altitude.

Each USS could see submitted flight plans from all participating USSs, and if volumes did not overlap, then their operation was approved (conforming). If a drone then flew outside of their approved flight plan, pilots in the area would be alerted that a drone is off course (non-conforming) and the flight volume displayed within the Operations Center would change color. If that drone did not return to its approved flight plan within a short period of time, the level of alerting would become more urgent – the color of the volume would change again, and operators would be notified that a drone in the area continues to be off course (contingent/rogue) and presented potential danger to other drones in the area. 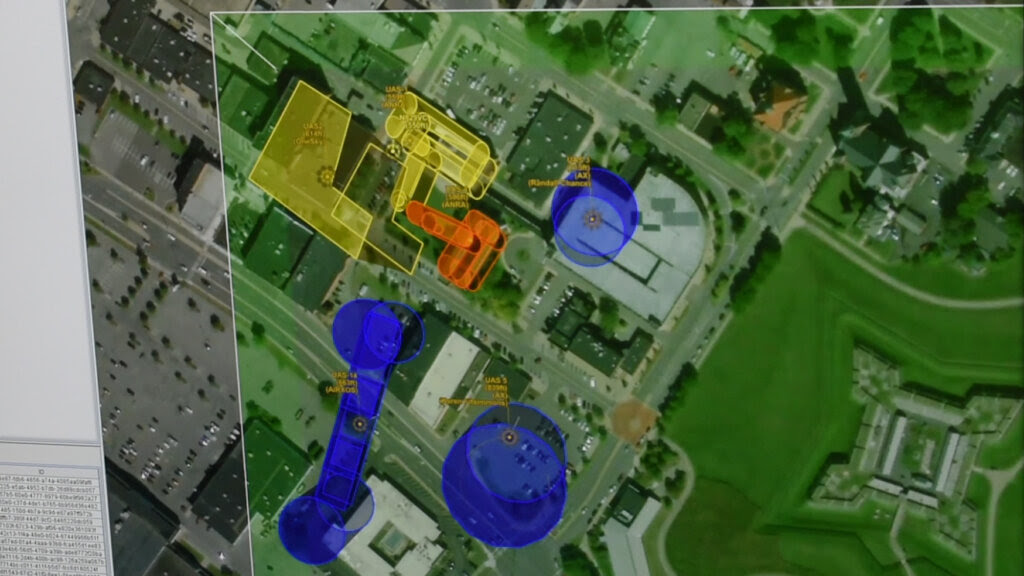 Conducting these high-density airspace operations showcased the technologies and systems needed to create and implement an unmanned traffic management (UTM) system – a system needed for unlocking the full capabilities of drones for commercial applications like package delivery or medical supply drop-offs. A UTM system would function much like the current manned air traffic management system, assuring that people, aircraft, and structures, both in the air and on the ground, remain safe.

“The completion of the FAA’s UPP Phase Two testing at Griffiss International Airport is a monumental accomplishment that Oneida County and its partners should be very proud of,” said Oneida County Executive Anthony J. Picente Jr. “It was an honor that our UAS Test Site, which is one of only seven in the nation to begin with, was selected to lead this effort. Our region continues to set the bar for UAS traffic management and to lead the globe in drone innovation.”

In addition to high-density operations and UTM functionality, multiple other technologies and capabilities were tested and proved. Remote Identification (Remote ID or RID), which acts like a “license plate” for drones, was a key component of many of the demonstrations. The FAA is currently working on rules that will require drones to be identifiable while in flight. 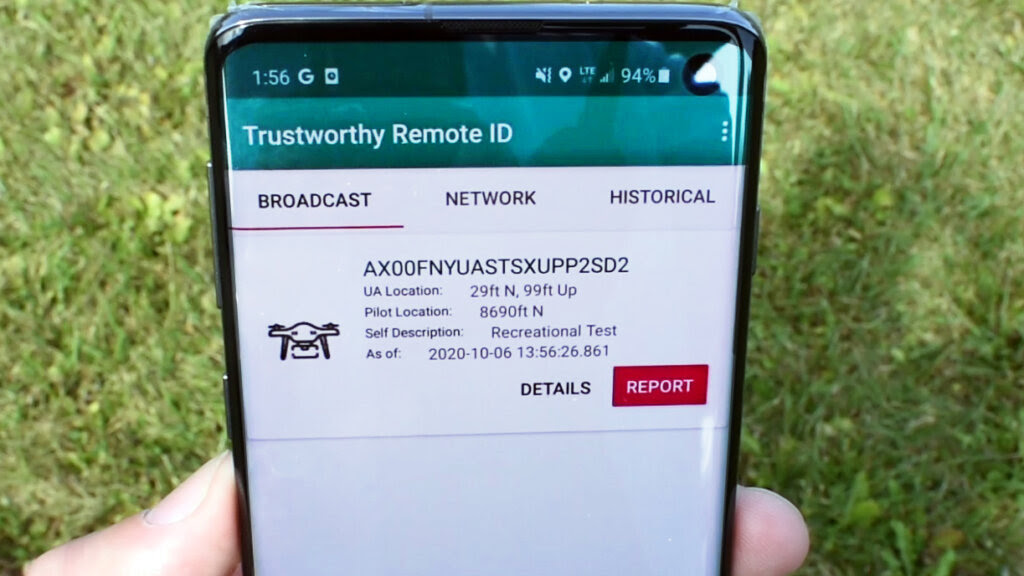 Detect and avoid technology was also tested during UPP2, utilizing the airborne collision avoidance system for small UAS (ACAS sXu), developed for the FAA by participating partner Johns Hopkins University – Applied Physics Lab. Manned and unmanned aircraft need to be able to see each other in the air to keep everyone safe. During testing, a general aviation airplane flown by a NUAIR pilot, flew within the testing area. The drone pilot, with an ACAS sXu-equipped drone, received a warning on his ground control system to descend in order to avoid the manned aircraft which breached the drone’s “maintain well clear” boundary – all systems worked as intended, providing safe separation. 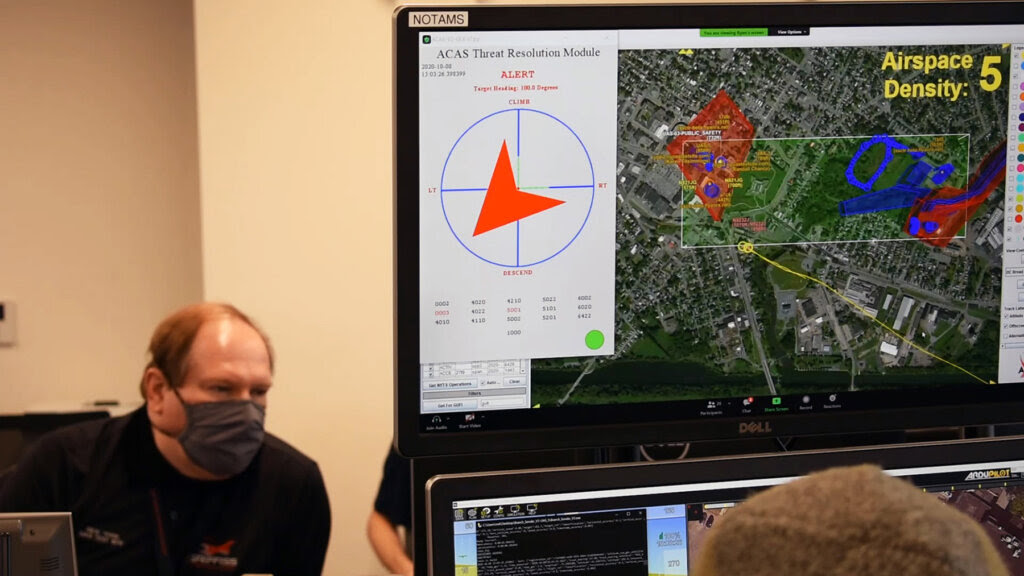 Adoption of drone technology by public safety organizations continues to grow. Sheriffs from Oneida County, Albany County, and Washington County took part in UPP2 by flying their drones and testing the process for implementing restricted airspace, reserving it for emergency drone operations. This process creates a “no-fly” zone in a specific area, alerting non-authorized drones in the vicinity to exit the airspace so they don’t interfere with emergency drone operations like immediate medication or medical equipment delivery. 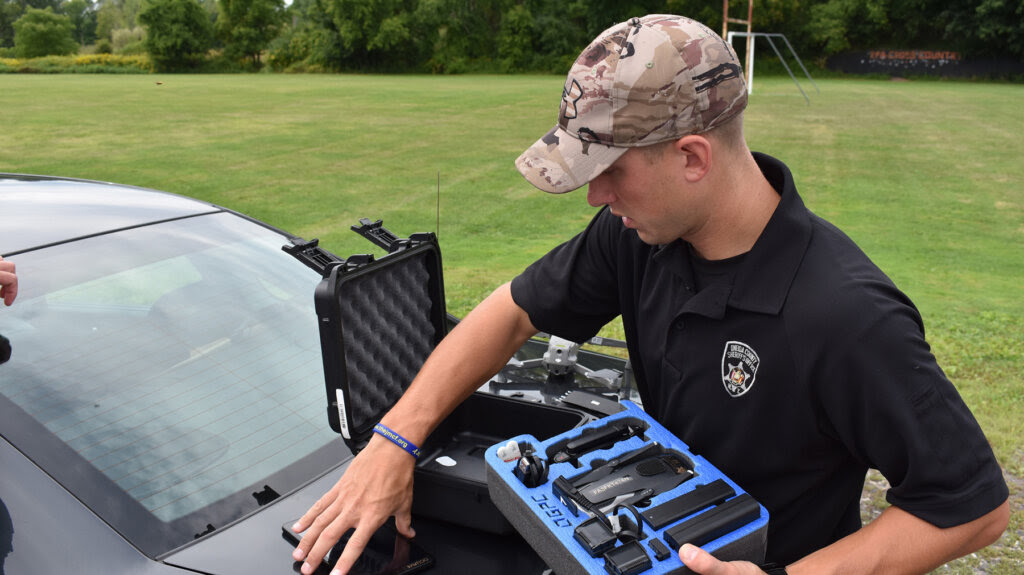 Overall, phase two of the unmanned aircraft traffic management pilot program was a success. The New York UAS Test Site and its contributing partners successfully demonstrated and validated each use-case and technology outlined in the program. Skyward (a Verizon company) is analyzing the Test Site’s LTE Command and Control (C2) data to understand how cellular LTE networks may be safely used as C2 datalinks for drones. Since cellular networks are already widely deployed, having a standardized method to assess performance from an aviation communications perspective will allow for wider beyond visual line of sight approvals and really advance the industry.

Mark Reilly, UPP2 Program Manager from AX Enterprize, stated: “The NY UAS Test Site and UPP2 team did an amazing job. Prior to contract award and COVID impacts, I knew this would be a complex and logistically challenging effort. The team had to push hard to accomplish what we needed to do. In the end, we exceeded everyone’s expectations with the most simultaneous live UAS operations that have ever been conducted at the Test Site, successful execution of all UPP2 use-cases, and the demonstration of many technological aviation advancements. Congratulations to the team that supported us, both in person and remotely, we could not have done this without you!”

“The collaborative effort between all of our partners and participating organizations in order to safely complete the task at hand, in the middle of a pandemic, was astounding,” said Tony Basile, Chief Operating Officer at NUAIR. “We had pilots come in from across the state including a pilot from Mohawk Valley Community College and multiple pilots from the sheriff offices of Oneida County, Albany County and Washington County. Without their support and participation, we wouldn’t have been able to get to the airspace density required for UPP2.”

New York State continues to invest and support Central New York’s surging UAS and advanced technology ecosystem. Support began in 2015 as part of Governor Andrew Cuomo’s Upstate Revitalization Initiative, aptly named CNY Rising, which included an unprecedented $35 million commitment for the creation of a UAS test corridor between Syracuse and Rome. Governor Cuomo announced the completion of the 50-mile UAS corridor in 2019. Thanks to these investments and others, Central New York continues its path of increasing jobs, regional wealth and UAS advancement.