Roberta Pirazzini set out an Arctic expedition to do something no one had ever tried before: fly a drone near the North Pole.

Sensors on the drone would assess sunlight reflected from the ice. This measurement, known as surface albedo, is key to understanding how much solar radiation is absorbed by the Earth and how much is reflected back into the atmosphere. It’s one of the scientific puzzles that can help predict how fast sea ice will melt.

But flying a drone over the planet’s northernmost reaches is no simple feat. Pirazzini and a colleague, Henna-Reetta Hannula, spent months learning to fly at the Finnish Meteorological Institute, where both are on staff as scientists. Technicians designed and built a sophisticated navigation system capable of handling extreme weather.

The scientists and their drones then joined the largest Arctic expedition in history aboard the Polarstern, an icebreaker carrying dozens of researchers on a year-long mission. The pair had also brought along a smaller practice drone that could fly inside their tiny cabin, the only chance they’d have to keep their skills sharp in the weeks of sailing before finally stepping onto the ice.

Right away, Pirazzini ran into the same problems that have beset Arctic explorers for two centuries: treacherous navigation conditions and technology that buckles in the deep cold.

Drones and helicopters have trouble near the North Pole because global positioning satellites suffer small uncertainties at extreme northern latitudes. This creates mounting confusion for navigation the closer a pilot gets to the North Pole, and Pirazzini’s drones would be operating closer than any before.

The navigation nightmare has claimed another drone earlier in the expedition. The drone took off from the ship, went in a completely uncontrolled direction and crashed. Pirazzini was terrified her albedo-measuring drone would fall victim next, and her fears were confirmed as soon as she stepped onto the ice. The navigation system on the main drone wasn’t working, meaning she and Hannula would need to manually calculate distances, direction, altitude and wind speed.

“The freezing conditions were our main enemy, not only for the ice in the blade” of the drone’s rotors, “but in our fingers,” Pirazzini says, her voice cracking over a satellite phone during the Polarstern’s return voyage earlier this month. “You need very delicate, small motions to operate the drone,” she says. “When your hand is freezing you lose sensitivity, your fingers can’t control the features anymore.”

Fog would turn into ice around the drone’s blades. Wind gusts stronger than eight meters per hour would ground the drone. Still, the two scientists managed to conduct 18 flights over three weeks. Albedo measurements captured by Pirazzini, 49, and Hannula, 33, will now be analyzed as part of multinational effort to understand how warming temperatures are affecting the Arctic—a scientific race against climate change itself. 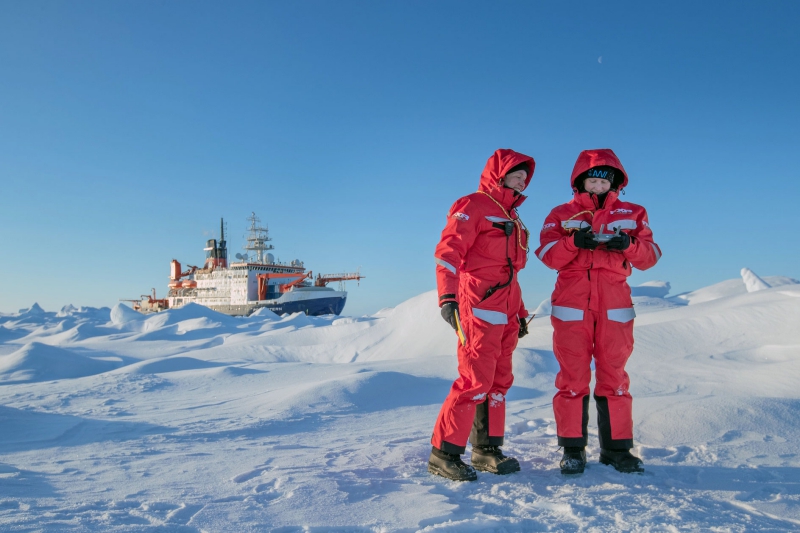 Roberta Pirazzini and Henna-Reetta Hannula, scientists at the Finnish Meteorological Institute, operate their drone near the Polarstern on September 10. Credit: Lianna Nixon/Alfred-Wegener-Institut

Earth’s northern icecap is heating about three times faster than the rest of the planet, disrupting a fragile ecosystem. Arctic sea ice, which melts during the summer and freezes back in winter months, shrank to the second-lowest level on record in September, the month when ice cover is usually at its lowest. Only in 2012 was Arctic sea ice cover smaller.

Anomalously warm conditions in the Siberian Arctic, which suffered an unprecedented heatwave during the first half of the year, are now making it harder for the ice to reform. Arctic sea ice is currently at the lowest level for this time of the year since satellite monitoring began in 1979—37% below the historical average.

“By this time in 2012 the ice had started to regrow,” says Samantha Burgess, deputy director at Europe’s Copernicus Climate Change Service. “It’s a little early to tell what implications this will have for the rest of the season but there are likely to be impacts for the marine food web.”

Back in August when Pirazzini’s drone flights started, sea ice in the Arctic had dropped to the lowest level on record for that month. These alarmingly low ice levels made it possible for the Polarstern to reach the North Pole from Norway’s Fram Strait in just six days.

“There were areas of open water everywhere, it was very easy to go there,” Pirazzini says. “That’s not nice if you think about the future of the Arctic. It’s a very fragile environment that will change without return.”

Measuring albedo becomes more important as the ice shrinks. The white surfaces of Arctic ice reflect solar radiation back into the atmosphere, while the ocean’s blue surfaces absorb it. Not all ice is equally reflective, however, and scientists are trying to figure out just how much solar radiation is being absorbed by ice sitting below shallow melt waters that have been spreading as temperatures stay warmer.

While sea-ice area can be monitored by satellites, other measurements that are crucial to understanding the speed of melting can only be obtained closer to the ground. This more granular data is essential to determining other drivers of climate change, such as how heat transfers through ice and into the atmosphere and water.

Traditionally, scientists have taken albedo readings with airplanes and helicopters. But drones are cheaper, can fly under worse weather conditions and below even low clouds. Pirazzini’s flights ranged between five and 30 meters over the ice.

“Drone technology is making progress every month, every year,” she says. “We are at the infancy of this business, and I believe it will expand very much because these are unique and needed measurements.”

In the Arctic, operating drones far from other scientists sometimes involved risk. Pirazzini and Hannula had to cross a fracture in the ice using a pontoon as a raft. At one point Pirazzini was kneeling on a raft over icy seawater, holding the carefully-wrapped drone, while Hannula helped her moor to safety using a long stick.

The drones at times proved more resilient to the rough Arctic weather than some of the expedition’s other flying objects. Two tethered balloons nicknamed Beluga and Miss Piggy would be sent to take cover from hard conditions in bright orange tent known as Balloon Town.

“Sometimes Miss Piggy was misbehaving and flying too low,” Pirazzini says laughing. “We would need to make sure the drone wasn’t in the area.”

The scientific arsenal on the Polarstern included a helicopter and many weather balloons equipped with a radio system that collected and transmitted data on temperature, humidity, wind direction and speed. A total of 1,574 balloons were launched—up eight per day over 12 months—and scientists often decorated them with names and birthday messages for their families. 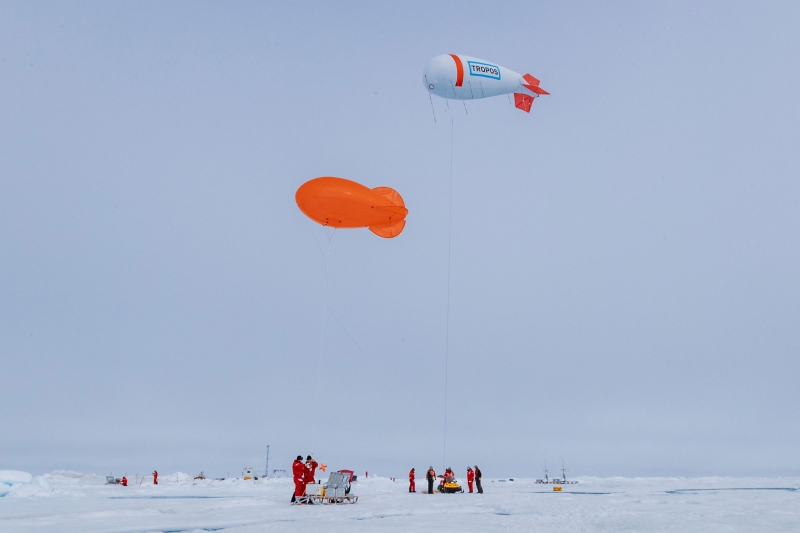 Hundreds of researchers from 20 countries took turns on the Polarstern for the MOSAiC mission, an acronym for Multidisciplinary drifting Observatory for the Study of Arctic Climate. Led by Germany’s Alfred Wegener Institute for Polar and Marine Research, it was the first expedition in modern history to spend a full winter close to the North Pole. The mission, which had a budget of more than 140 million euros ($165 million), ended on October 12 after 389 days at sea.

“Climate change will probably force the organization of more expeditions like this one because there will be an urge to do something, to understand the implications,” Pirazzini says. “This expedition has drawn new paths for research. I feel I have the responsibility to make the most out of it.”