On 12 November 2020 the fifth and last NATO Alliance Ground Surveillance (AGS) aircraft arrived at the AGS Main Operating Base in Sigonella, Italy. The arrival of the RQ-4D aircraft at its home base in Europe represents a new milestone in the NATO AGS Programme, completing the NATO AGS fleet.

The aircraft took off from Palmdale Air Force Base in California, United States at 18:04 local time on 11 November 2020 and landed at Sigonella at 13:41 local time the following day, almost 20 hours later.

“I am proud of the NATO AGS Force and of the entire AGS team. The arrival of the fifth and final Phoenix Aircraft here in Sigonella is a landmark achievement for everyone. We have accomplished a tremendous amount of training and preparation already and we are looking forward to continue our hard work with the new and final aircraft.  Along with our Italian hosts, SHAPE, NATO nations and industry we will continue expanding our infrastructure and capabilities in the coming months. We remain committed to advancing this important capability to the benefit of the entire Alliance”,

“Roughly speaking one year after the first ferry flight, the landing of the fifth NATO AGS RQ-4D aircraft completes the Ferry Flight of AGS air segment. No doubt, there is significant work ahead of us, but all of us here at NAGSMA are now focused on moving the Programme forward and handing over the AGS system to the NATO AGS Force. I am proud to be the General Manager of such a highly motivated, international team here at NAGSMA – it’s all about their teamwork and their commitment beyond expectations”,

Following the arrival of RQ-4D Phoenix 5, the NATO Alliance Ground Surveillance Management Agency and the Italian Airworthiness Authorities will continue to wrap up the required documentation and hand-over the system to the NATO AGS Force in the coming months. 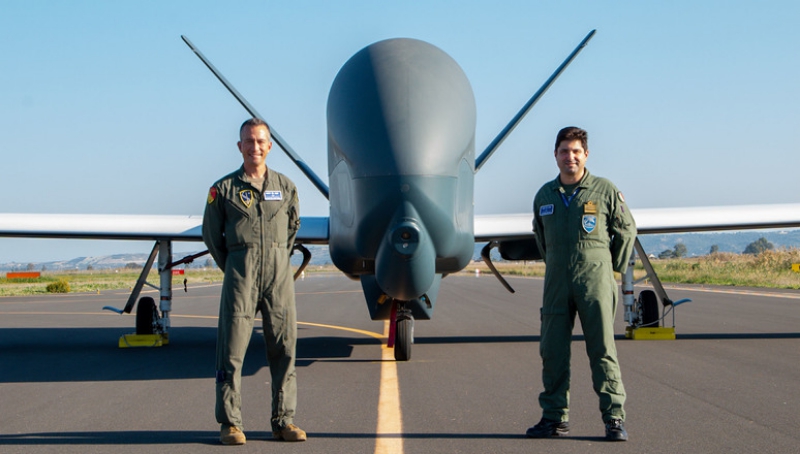 NATO’s AGS capability is a custom-made system procured by 15 Allies to be shared with the entire Alliance. It is uniquely adapted to NATO requirements and specifically designed to meet the Intelligence, Surveillance and Reconnaissance requirements identified by the North Atlantic Council and the Supreme Allied Commander Europe. NATO’s collectively owned and operated AGS  system will provide a unique state-of-the-art capability for all 30 Alliance members.

AGS is based on the Northrop Grumman RQ-4 Global Hawk wide-area surveillance drone and the MQ-4C Triton maritime surveillance platform. Northrop Grumman is the prime contractor for AGS and leads an industry team comprised of Leonardo, Airbus, and Kongsberg and other defense companies from all of the procuring nations participating in the AGS program.

“Once the NATO AGS system achieves Handover, NATO Commanders will have greater flexibility and redundancy to support the mission of protecting ground troops, civilian populations and international borders in peacetime and times of conflict as well as humanitarian missions during natural disasters,”

The NATO AGS RQ-4D is based on the U.S. Air Force wide area surveillance Global Hawk. The high-altitude, long-endurance unmanned NATO AGS system, which includes the multi-platform radar technology insertion program radar, provides leading-edge intelligence, surveillance and reconnaissance capability that is able to deliver near real-time situational awareness 24 hours a day, seven days a week. Led by Northrop Grumman, the NATO industry team is comprised of companies from across NATO’s member nations, including Leonardo, Airbus, and Kongsberg and other defence companies from all AGS Procuring Nations.