A new Danish traffic management platform for drones, paving the way for integration of drones into Danish Airspace, is currently being tested on Funen. The so-called UTM platform serves to ensure safe and efficient flight of thousands of commercial drones, in full integration with conventional air traffic.

In the coming years, drones will be occupying Danish Airspace to a greater extend. The number of commercial drones in Denmark is expected to surpass 12,000 in five years, and that growth will increase further in the years beyond. Due to the expected growth, the implementation of a new Danish traffic management platform for drones – a so-called UTM platform – seeks to accommodate the need for safe and efficient management of drone traffic, in full integration with the general air traffic. Today, the initial test version of the new UTM platform was put into operation on Funen by Danish Minister for Transport, Benny Engelbrecht

There is no doubt that drones are of great interest in Denmark, where alone 5,000 commercial drones are registered. This number is expected to rise over the years, which is why we have great interest in developing a system that is able to coordinate the routes of the drones and ensure their simultaneous flights alongside our aircraft – with no negative implications for the conventional air traffic or possible inconvenience for people in general. The use of drones has tremendous potential to benefit from, within trade, delivery of goods, and in the future, maybe even as a way of travel. I am therefore very excited to follow the development and results of the test system that Naviair has developed,

The test of the UTM system is initially planned to only take place in the airspace of U-Space Funen, at the drone test centre at HCA Airport, but already during 2021, the platform will gradually be deployed in the whole country. In the coming years, the UTM platform will be expanded with additional and increasingly advanced functions, which over time, will make it possible to carry out very complex drone operations, in full integration with existing air traffic. Drones are currently only allowed to fly within the visual line of sight of the drone operator, and under very restrictive regulations. When the UTM platform is fully operational, it will be possible for the drone operator to fly beyond visual line of sight.

Mayor of Odense, Peter Rahbæk Juel, also took part in the inauguration. He emphasized the fact that Funen is an obvious location for testing and developing the drone traffic management of the future. 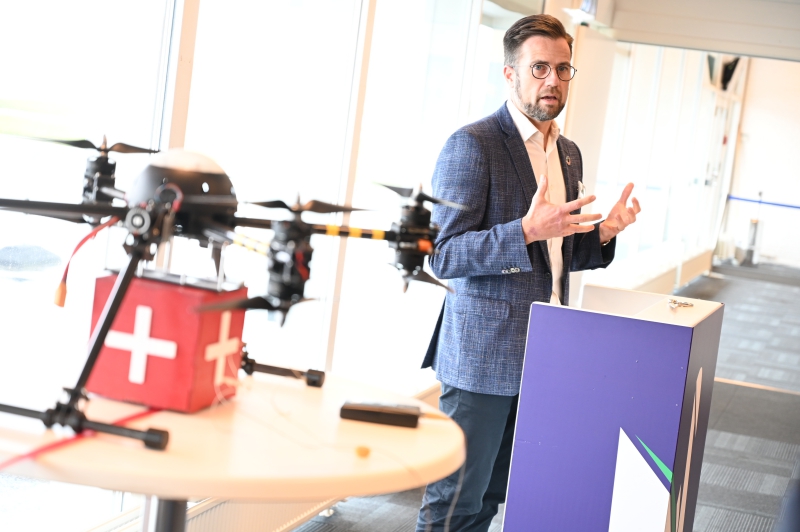 Drones will revolutionize the way in which we transport people and goods. The possibilities are huge, and we must explore and gain further insight into the potential of drones. HCA Airport and Funen are already a hub of Danish drone development, and drones – along with robots – have been highlighted as a national position of strength, with Funen as headquarters. On Funen, we have research, educations, promising start-up companies, a test centre of outstanding international class, and some of the best investors in the field, and from Odense we wholeheartedly support the drone adventure of the future,”

The growth in the drone field is not only limited to Denmark, though. The European Union Aviation Safety Agency, EASA, projects that by 2025, 200,000 drones will be airborne around the clock all over Europe.

Naviair is behind the development of the UTM platform in Denmark, in close collaboration with The Danish Transport, Construction and Housing Authority, University of Southern Denmark, HCA Airport, and UAS Denmark (Denmark’s international testing centre for drones). Several other drone-related projects and stakeholders, including the Health Drone project and the Funen Police department, are also contributing to the project.