Kawasaki Heavy Industries announced that it has successfully carried out the first flight tests of the K-RACER (Kawasaki Researching Autonomic Compound to Exceed Rotorcraft) at the Taiki-Cho Multipurpose Aerospace Park in Hokkaido. Interestingly, the unmanned compound helicopter was equipped with a supercharged Ninja H2R engine.

The K-RACER is a special type of testing machine called a compound helicopter with a main rotor being 4 m in diameter. It has the main wing propelled on both sides – not on the tail – of the conventional type. This allows the torque associated with the rotation of the main rotor to be canceled and forward thrust to be generated. In addition, in forward flight, the main wing shares the lift, reducing the burden on the main rotor and enabling high-speed flight that cannot be achieved with conventional helicopters. Other details about the device were not disclosed.

This machine is a special type of UAV – rotorcraft, which has a main rotor (4 m in diameter), wings and pulling rotor on the left and right side instead of the tail rotor. The propellers on the wings neutralize the torque caused by the rotation of the main rotor and create direct thrust. In addition, in direct flight, the wings increase lift by reducing the load on the main rotor, providing high-speed flight that cannot be achieved with conventional helicopters.

The test engine was developed by the Aerospace Systems Company, but its power source is the supercharged engine of the Kawasaki Ninja H2R motorcycle. The engine has a capacity of 998cc, DOHC, 16 valves, which can produce a maximum power of 310 hp at 14,000 rpm and a peak torque of 165 Nm at 12,500 rpm. 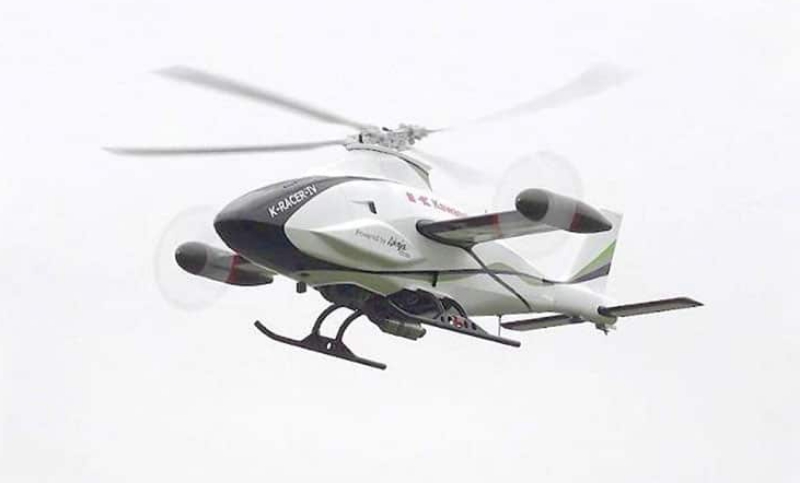 During the flight tests, the drone performed a vertical take-off, a flyby around the airfield, and a vertical landing. The Kawasaki helicopter was tested unmanned and controlled autonomously. Kawasaki Heavy Industries said that the technologies obtained from the development of the K-RACER helicopter are planned to be used in the creation of high-speed manned and optionally unmanned helicopters.