UK technology company RelmaTech offers a new method for tracking drones and manned light aircraft to be identified in the airspace.

“While ADS-B is a well-established technology for the identification and tracking of manned aircraft, it has several severe limitations,” says Philip Hall, RelmaTech’s Co-Founder and CEO. “Not only does it rely on an extensive ground network of receivers, but it is vulnerable to spoofing. In addition, adding low level UAS operations into the existing ADS-B network would almost certainly saturate the network and thus create an enormous headache for Air Traffic Controllers.”

Industry concurs with the FAA, DHS and other stakeholders concerned that ADS-B is vulnerable to spoofing through deliberate action and that such spoofing is relatively easy to do. A recent white paper produced by several members of an ASTM Standards Working Group in response to those concerns and the potential disastrous consequences concluded that, “rather than a prescriptive approach of requiring validation of an ADS-B track from an independent source [as proposed by the FAA], other operational and technical alternative solutions could be pursued that mitigate the likelihood and severity of such consequences.”

RelmaTech’s Secure Integrated Airspace Management (SIAM) system provides a unique and innovative solution. Enabled by a small light weight, low power, low cost module that can be easily installed on all types of unmanned and manned aircraft, SIAM provides both network and broadcast remote identification and tracking capabilities. SIAM operates primarily over the cellular network but is also designed to support multiple communication options when cellular is not available.

“The onboard SIAM module employs proven technologies and concepts used in online and mobile communications and information management to securely transmit encrypted aircraft and flight data from the operating aircraft over the operative network to the SIAM cloud-based web portal,” explains Hall. “The onboard SIAM module essentially acts as a digital substitute for an ADS-B transmitter and the SIAM cloud-based system negates the need for an extensive ground-based receiver network while enabling an effective alternate means of providing situational awareness in the shared airspace.”

Globally, a Flight Information Management System (FIMS) is considered a core element of most federated UTM models. It provides a mechanism for shared situational awareness among all airspace users by being a gateway for data exchange between the UTM participants and the Air Traffic Management (ATM) system. As such, the FIMS is the UTM component that the Air Navigation Service Provider (ANSP) will build and manage centrally, primarily to support UTM operations and enable UTM/ATM integration.

“By integrating SIAM with the FIMS, and equipping aircraft with a SIAM ‘digital ADS-B’ module (similar to a rule proposed by the FAA for ADS-B), ANSPs will have a secure, central cloud-based capability to capture, authenticate, track, record, display and share live aircraft flight data without the concerns of spoofing, network saturation or dependency on dedicated ground infrastructure,” says Hall. “UAS Service Suppliers (USS) will also be able to access trusted aircraft identification and tracking data from SIAM via their interface with the FIMS as one of the UTM services and data types provided.” 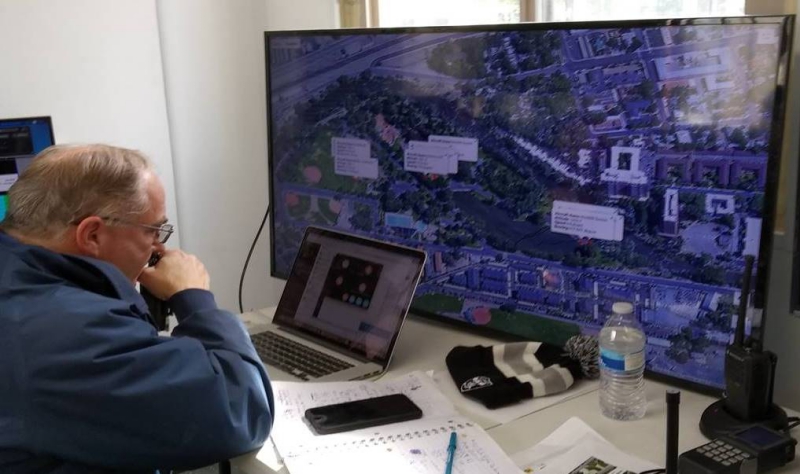 RelmaTech’s SIAM system has been supporting commercial UAS flight operations since mid-2016. All UAS flown in the recent NASA UTM TCL4 flight trials in Reno, Nevada were fitted with a SIAM module that successfully provided continuous real-time UAS remote ID and tracking information simultaneously over the cellular network and by WiFi direct broadcast.

Top Photo: Installing the SIAM module in a FW drone