senseFly fixed-wing drones have been used to track and monitor the formation of lake ice hazards on Lake Winnipeg by NextGen Environment Research Inc., a Canadian company based in Winnipeg. The project, conducted as part of the Canadian Space Agencies Earth Observation Applications Development Program (EODAP), aimed to identify and monitor the levels of lake ice and detect cracks and pressure ridges to raise awareness among local communities and first responders about the risks of lake ice travel.

With studies projecting a reduction in lake ice mass over the coming years, ice safety is becoming a critical consideration for many populations who use the lakes to travel for commercial and leisure activities. The onset of melting ice – which begins in spring – is a critical time for monitoring ice, as it can result in pressure ridges, leads and cracks appearing and expose open water. Pressure ridges can extend 3m above the surface and expand to more than 100km on larger lakes, and in winter can create significant obstacles for lake ice travel and increase the risk of collision. In cold periods, thin ice can also form in cracks, which may become covered in snow overnight and produce an unseen hazard the following day.

senseFly’s eBee Plus drone was used to map the South basin of Lake Winnipeg, thanks to its ability to withstand extreme temperatures while accurately mapping larger areas per flight than any other UAV with a similar weight. Having reliable equipment that can operate in rapidly changing temperatures was crucial to allow the team to gather precise and reliable on-the-ground data in conditions that ranged from -20°C to +20°C. In addition, utilizing senseFly’s drone technology eliminated the need for traditional ground mapping techniques, which could be dangerous on a surface where ridges continuously open and close. 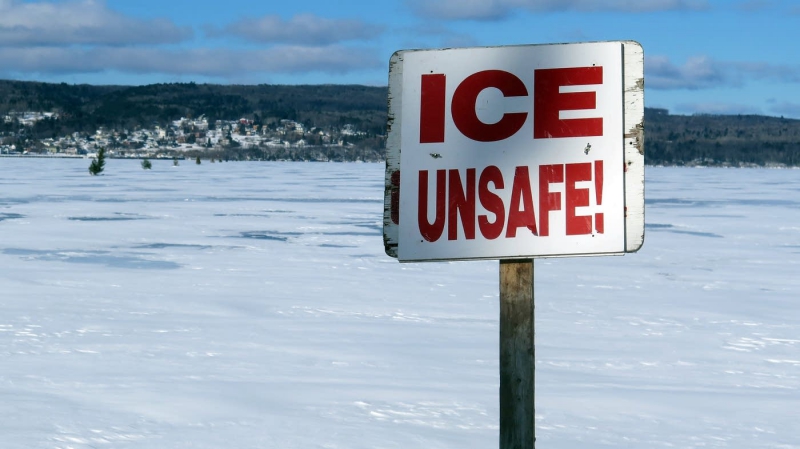 Covering a scope of approximately 1km by 0.8km across two sites, the eBee Plus was deployed weekly from late February to early May to perform a full topographic survey, which was then combined with data from 14 satellite overpasses. Approval from Transport Canada was required beforehand, which helped the team to use the eBee Plus within visual line of sight (VLOS), with the aid of a visual observer. In total, 14 surveys were required to gain a comprehensive understanding of the area and help create accurate, precise digital elevation models. To assess challenging conditions such as wind speed and project feasibility, the team used senseFly’s eMotion management software before each flight, helping to plan routes and load elevation data in advance.

The NextGen team was able to gather hundreds of images, which were processed through Pix4DMapper software to create highly detailed digital surface models showing the location of ice hazards, allowing the team to locate ice ridges and monitor size changes from week to week and map safe lake ice travel routes.

“The ice conditions of Lake Winnipeg during early spring are extremely challenging. We were confident that the senseFly eBee Plus would be reliable enough for us to fly over the lake at a safe distance from the hazardous ridges – even once the ice had begun to decay and move and we had to work from shore. Having this level of dependability on such a large scale was crucial for our operations.

“Investing in the eBee Plus has allowed us to identify key areas for ice validation and enables us to study much larger areas, because we know where we need to put effort before the satellite goes over. This is an ideal way to integrate data from the surface and from low earth orbit – for NextGen, the results have been incomparable.”

“Using senseFly’s intuitive drone technology and software enabled NextGen to gather the detailed and highly geo-accurate data they needed to identify safe travel routes and regularly monitor hazards at Lake Winnipeg at critical points in the year – despite the unstable lake ice mass in winter and early spring. As the global leader in fixed-wing drones, senseFly’s eBee Plus provided an efficient, reliable and easy-to-use alternative to terrestrial techniques, which may have proved hazardous given the challenging conditions. The results are great to see, and we’re delighted that the seamless experience of the eBee Plus will be instrumental in future projects led by NextGen.”