The use of drones in agriculture has gained size and momentum due to their capability to save time and costs while improving crop profit. However, most multi-copters aren’t powerful enough to cover large crop areas or plantations.  In the best of cases, electric multicopters offer flight times that range from 10 to 25 minutes with a load capacity of 20L, forcing the pilot to carry multiple batteries to the field and losing most of their time charging them.

The team of Drone4agro, have announced they will be cooperating with Loweheiser, an engine company, to develop a range extender for their 6m spraying drone.

Together the companies are working on an efficient solution to deal with the weight. By building a 6-meter wide drone, the carrying capacity will be improved. With this game-changing innovation, farmers will be able to have the drone carry 50L of spray means, preferably biological,  and stopping only to refill their drone.

The solution consists of installing a range extender on the drone that uses fuel instead of electric batteries. This greatly simplifies the operation by eliminating the need of chargers for multiple batteries. All is replaced by a range extender containing a 2-stroke engine coupled to an electric generator. The battery change operation is replaced by a simple refilling operation of the fuel tank that is carried out only every 5 flights, so the time at the stop to recharge the fungicide liquid is reduced to a few seconds. 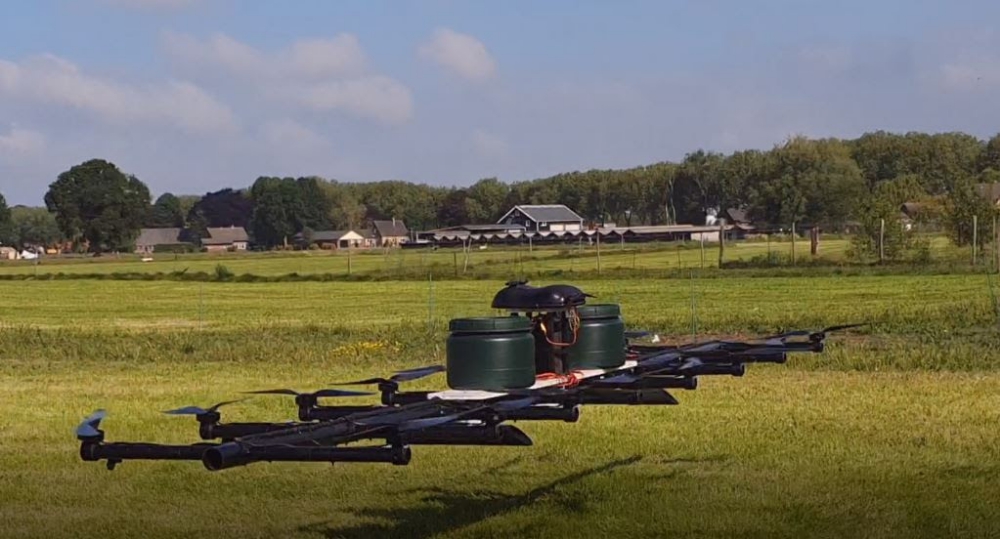 About Drone4Agro and Loweheiser:
Drone4Agro is a start-up in the Netherlands that produces drones for agriculture for many applications such as spraying, fertilizing, sowing, etc. The company focuses on drones that can lift from 5 to 100 liters. This team first works out the customer needs (eg drone with 80 liter payload and spraying 5 ha per hour), and once the concept is established a meeting is set up with the customer to discuss the development of the prototype that will be built and tested before it is delivered to the client.