Defense contractor SRC, Inc. developed the Agile Condor system for the Air Force Research Laboratory (AFRL), delivering the first pod in 2016. It’s not clear whether the Air Force conducted any flight testing of the system on other platforms before hiring General Atomics to integrate it onto the Reaper in 2019.

The service had previously said that it expected to take the initial pod aloft in some fashion before the end of 2016. 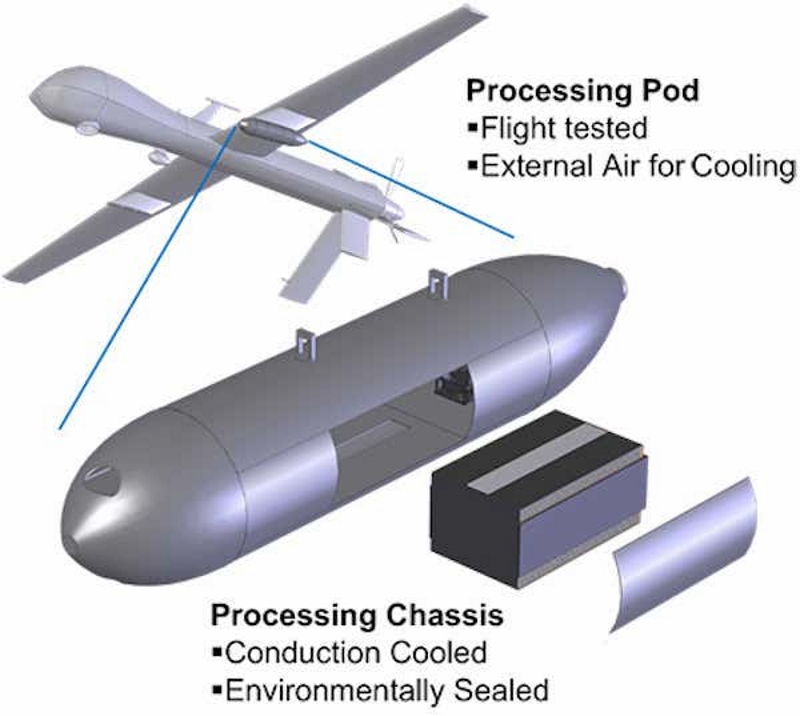 A top-down view of the pod itself

“Computing at the edge has tremendous implications for future unmanned systems,” said GA-ASI President David R. Alexander. “GA-ASI is committed to expanding artificial intelligence capabilities on unmanned systems and the Agile Condor capability is proof positive that we can accurately and effectively shorten the observe, orient, decide and act cycle to achieve information superiority. GA-ASI is excited to continue working with AFRL to advance artificial intelligence technologies that will lead to increased autonomous mission capabilities.”

High-powered computing at the edge enables autonomous target detection, identification and nomination at extended ranges and on-board processing reduces communication bandwidth requirements to share target information with other platforms. This is an important step towards greater automation, autonomous target detection, and rapid decision-making. GA-ASI will continue to work with AFRL to refine the capability and foster its transition to operational constructs that will improve warfighters’ ability to operate in contested or denied environments.

“Sensors have rapidly increased in fidelity, and are now able to collect vast quantities of data, which must be analyzed promptly to provide mission critical information,” an SRC white paper on Agile Condor from 2018 explains. “Stored data [physically on a drone] … creates an unacceptable latency between data collection and analysis, as operators must wait for the RPA [remotely piloted aircraft] to return to base to review time sensitive data.”

“In-mission data transfers, by contrast, can provide data more quickly, but this method requires more power and available bandwidth to send data,” the white paper continues. “Bandwidth limits result in slower downloads of large data files, a clogged communications link and increased latency that could allow potential changes in intel between data collection and analysis. The quantities of data being collected are also so vast, that analysts are unable to fully review the data received to ensure actionable information is obtained.”

This is all particularly true for drones equipped with wide-area persistent surveillance systems, such as the Air Force’s Gorgon Stare system, which you can read about in more detail here, that grab immense amounts of imagery that can be overwhelming for sensor operators and intelligence analysts to scour through.

Agile Condor is designed to parse through the sensor data a drone collects first, spotting and classifying objects of interest and then highlighting them for operators back at a control center or personnel receiving information at other remote locations for further analysis. Agile Condor would simply discard “empty” imagery and other data that shows nothing it deems useful, not even bothering to forward that on.

“This selective ‘detect and notify’ process frees up bandwidth and increases transfer speeds, while reducing latency between data collection and analysis,” SRC’s 2018 white paper says. “Real time pre-processing of data with the Agile Condor system also ensures that all data collected is reviewed quickly, increasing the speed and effectiveness with which operators are notified of actionable information.”

At least at present, the general idea is still to have a human operator in the ‘kill chain’ making decisions about how to act on such information, including whether or not to initiate a lethal strike. The Air Force has been emphatic about ensuring that there will be an actual person in the loop at all times, no matter how autonomous a drone or other unmanned vehicle may be in the future. 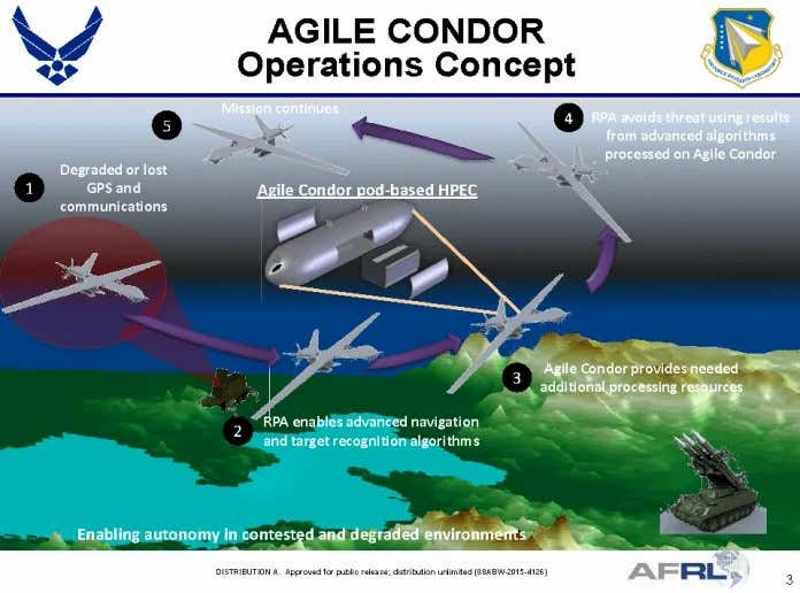 Still, developments such as Agile Condor will significantly reduce the amount of necessary human interaction in various parts of the targeting process, as well as general intelligence collection and initial analysis, and potentially much more, as time goes on. It could also fuse various forms of sensor data and other available intelligence together to specifically weight possible areas of interest over others and prioritize certain targets. The Air Force has also said that this system could use these capabilities to enable drones to navigate and detect and avoid potential threats automatically, including at times when its links to a control center or the GPS satellite navigation system are disrupted or blocked entirely.