Drone Made from Pineapple Leaves has Electrical Resistance Quality

Universiti Putra Malaysia (UPM) researchers have successfully invented an unmanned aerial vehicle (UAV) or a drone made of natural fibres, pineapple leaves, that has electrical resistance.

The drone, named Putra Unmanned Aerial Vehicle (UAV) or Putra UAV, is the first of such innovation to use natural fibres or biocomposites from pineapple leaves.

It can fly up to about 30 metres (100 feet) high and remain airborne for about 20 minutes.

With its special electrical resistance feature, it is capable of preventing short circuits. In addition, it is also easy to repair in the event of minor damage.

Head of the research group, Prof. Ir. Ts. Dr. Mohamed Thariq Hameed Sultan, said Putra UAV is made of several structures which include a frame made of natural fibres, a motor, blades and a rechargeable battery.

He said that at present, most drones are made of plastic, carbon and aluminum fibres that are categorised as synthetic fibres.

“Therefore, biocomposites have a great potential to replace existing materials because they are lightweight and are environmentally friendly due to biodegradation factors that allow them to be easily decomposed and disposed of in the soil,” he said.

He said the idea of ​​creating a drone from the natural fibres of pineapple leaf was conceived during a community project in Teluk Panglima Garang, Selangor in 2017 when he was approached by the village head who asked for UPM’s assistance to help dispose heaps of pineapple leaves from the village pineapple plantation.

He added that according to the village head, these unattended heaps of pineapple leaves would either become nests for poisonous animals such as snakes and lizards or be burned, which led to pollution. 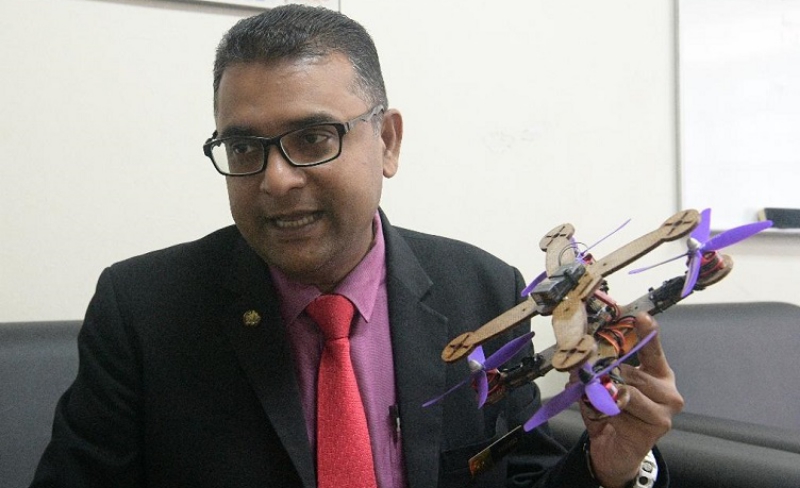 Prof. Ir. Ts. Dr. Mohamed Thariq, who is also a lecturer at the Aerospace Engineering Department, Faculty of Engineering, UPM, said he then applied for research funds and obtained RM25,000 from UPM to develop an ecosystem by producing a machine that could convert pineapple leaves into fibres.

He said converting pineapple leaves which are non-synthetic into fibres was a new invention.

According to him, 300 gm of pineapple leaves could produce four pieces of plates in the drone making process.

“The production of Putra UAV has successfully utilised the use of pineapple leaves,” he said.

He said the drone could be used for air monitoring purposes, pesticide spraying in agricultural activities, or simply turned into a hobby. He expected the production would further elevate UPM’s status in the field of agriculture.