Drone harvesting? Yes you can!

Drones are now more or less routinely used by farmers across the globe to determine soil characteristics, check crop conditions, monitor irrigation systems and spray crops. But not for harvesting crops, yet.

Using drones for harvesting is not such a bad idea at all if you ask me. Why? Because with drones you have zero chance of soil compaction for example. And that’s a major problem worldwide due to heavy-weight harvesters and transport vehicles such as chaser bins during harvest. In addition, the urgency to automate the harvest better is increasing. For example due to shortages of seasonal workers.

On a small scale, research is already being done to use drones for the harvest of (soft) fruit. A logical application, because the harvest of apples, pears, berries, et cetera is hardly automated and usually still is manual labour. Machines that are available to harvest fruits often cause damages to the fruit itself or it results in losses because the fruits fall on the ground.

There are some pioneering projects underway. Like Tevel Aerobotics Technologies who are developing autonomous drones equipped with a one-meter long mechanical claw, that can pick fruit, or do thinning and pruning tasks in orchards.

The harvest drones from Israeli start-up Tevel are equipped with artificial intelligence capabilities. These lets them identify types of fruit, blemishes, and the fruit’s level of ripeness. While the company’s current version is only able to pick apples and oranges, Tevel is working to expand its drones’ capabilities to include additional fruits such as avocados and mangoes.
[embedded content]

Meanwhile In New Zealand, Newton Research Labs are also working on a variety of autonomous fruit picking robots, including airborne pickers. The aim, they say is to have “fruit picking drones whizzing through orchards day and night”.

So, for fruit harvest, drones seem to be a realistic option in the near future. But for arable crops such as cereals, potatoes, sugar beet and onions, drones they do not seem to be an option (yet?). Because of various reasons, such as the enormous volume and acreage of these crops. And that’s a pity, because soil compaction is a major issue in these crops. 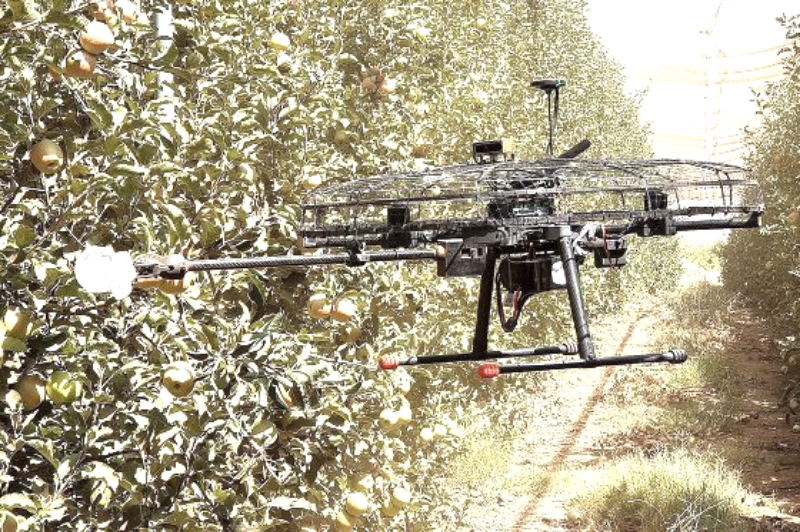 For these crops, all hope is placed on the arrival of lightweight, autonomous vehicles for harvesting and transport with as little impact on the soil structure as possible. That is why research projects such as the hands-free research project in the UK are so important for a healthy soil and future of arable farming.