A British survey drone crashed into a house and fell outside due to GPS interference, according to a report by the U.K.’s Air Accident Board. The 25-pound drone fell from sufficient height to cause serious injury or death, but fortunately no one was present at the time.

A second drone sent up to find the crash site almost suffered the same fate.

The incident occurred in December during a routine construction site survey with a DJI Matrice 600 Pro, essentially a scaled-up version of DJI’s popular consumer quadcopters. Operators had previously noted interference with the satellite navigation signal, but these had not caused serious problems. On the final launch though, the drone rose to an altitude of a hundred feet and reported a GPS compass error.

When this happens the drone automatically reverts to a manual flight mode and hovers in place. It uses a barometric pressure sensor to maintain altitude, but without knowing its movement relative to the ground it drifts with the wind. Normally the operator would take over control, but in this case they were taken by surprise and the drone sailed behind trees on a stiff 15 mph wind, disappearing out of sight and manual control range over an industrial site.

The drone maintained its height above sea level, but the rising ground meant that it was at rooftop level when it reached a housing estate a few hundred meters beyond. It struck a house, damaging rotors, and fell into the garden.

According to the U.K.’s DROPS standard for industrial safety, a four-pound blunt object falling from six meter, the height of the fall in this case, can cause injury or death even to someone wearing a hard hat. The drone was six times as heavy with a correspondingly high risk of serious injury. 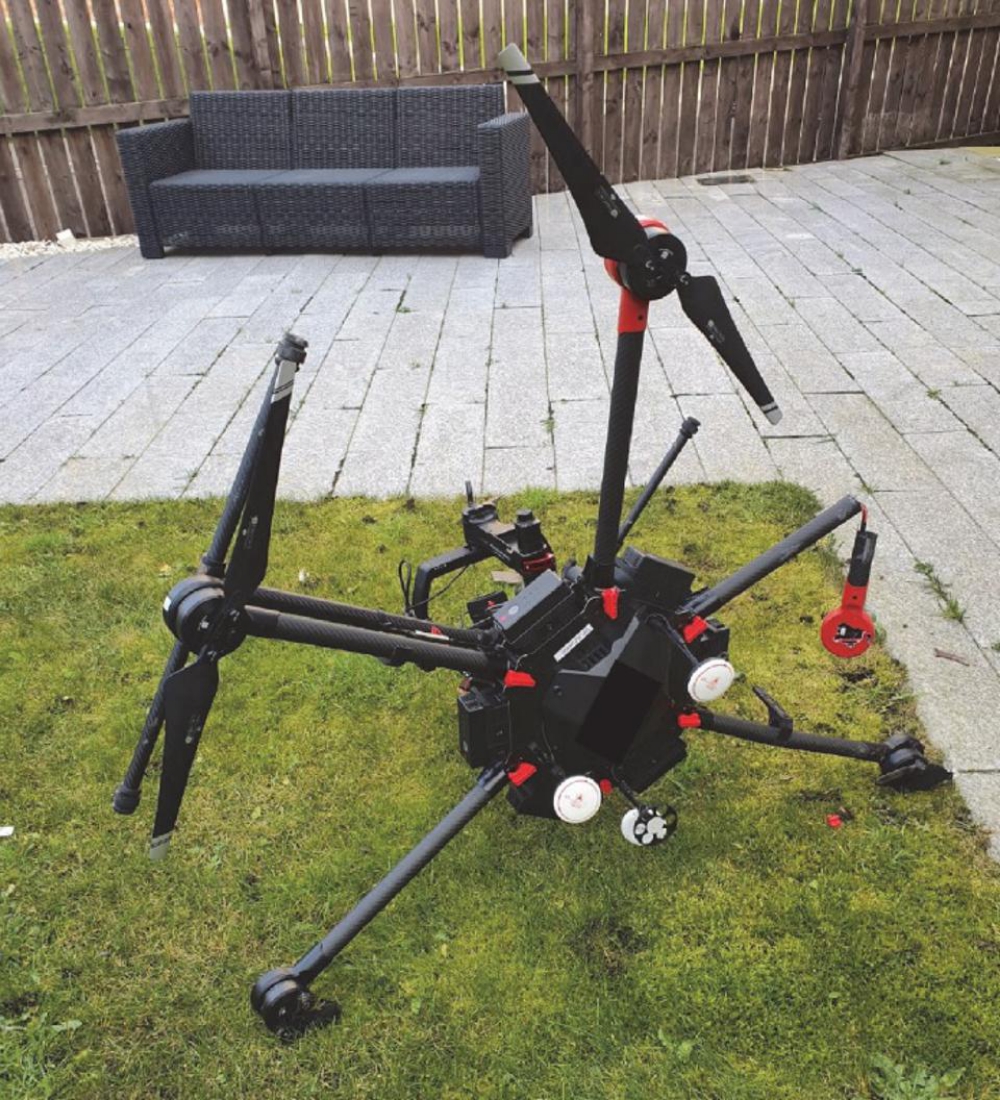 The drone operator launched a second drone to go looking for the crash site, as they had only a rough idea where it was. This also gave a signal interference error and the second drone was quickly and safely landed.

The source of the interference has not been identified. It may have come from a GPS jammer. Sold as ‘personal privacy devices’ these can be easily obtained on the internet for $30. These are legal to own, but illegal to operate in the U.K. They are typically used by truck drivers and others who do not wish their vehicles location to be recorded, but interfere with all GPS receivers within line of sight. The GPS signal from orbiting satellites is very weak, equivalent to a car headlight from 12,000 miles away, so is easily swamped by a nearby transmitter no more powerful than a cellphone.

The incident raises questions over civil drone safety, especially with larger drones which present a significant injury risk. Planned drone delivery services, like Google GOOGL ’s Wing and Amazon’s Prime Air will need robust navigation that will not go off-course – or crash – when exposed to GPS interference. Especially when there are many people who do not like the idea of drones flying over their towns and are willing to act against them. Accidental GPS interference is also an increasing issue, with concern in the U.S. that the Ligado Networks’ 5G transmitters will interfere with any precision GPS – like those on survey drones – within two miles.

The incident also underlines the need for military drones to have methods of navigation other than GPS. Military-grade GPS jammers and spoofers, which give a false location, are now deployed as anti-drone defenses. Iran claims that it brought down a U.S. RQ-170 Sentinel with GPS spoofing in 2011; such devices are now increasingly available in the commercial sector, possibly originating with China which seems to use the technology to protect government installations.

While used extensively by others, GPS is a military system, operated by the U.S. Air Force. It is currently undergoing an upgrade, known as GPS Block III, estimated at over $5 billion but that will not necessary help prevent this type of incident.

“The low power means GPS is really, really, really easy to jam,” says Dana Goward, President and Director of the Resilient Navigation and Timing Foundation. “GPS III provides jam resistance improvements for military users with special equipment, but the 99% of users who are civilians won’t get much added benefit at all.”

“We need to start thinking about the overall architecture. What we need is a multi-layer architecture, with GPS and other satellites, something like eLoran for a strong, terrestrial, difficult-to-disrupt regional coverage, and wi-fi, cell towers, inertial systems and other approaches for the local layers,” says Goward.

A one-off drone crash in the U.K. causing no casualties may not seem like a big deal. But some may see it as a sign of things to come.