ISIS released photos of a U.S.-made drone the terror group said it captured and dissected in Egypt after the UAV went down in the northeastern part of the country.

The pictures came as ISIS has claimed new territory in northern Sinai and Egypt’s military forces have clashed with jihadists in the restive region. The drone was said to have crash-landed west of Bir al-Abd, the region where more than 300 worshippers were slain by dozens of gunmen during Friday prayers in a 2017 ISIS mosque massacre.

The images show AeroVironment’s RQ-20B Puma surveillance drone. In 2018, the California company won a $9 million contract to provide the Egyptian government systems and support; the contract completion was set for next month. The hand-launched RQ-20B Puma AE II M3/M4 has an electro-optical and infrared camera and navigation system, and can land on water or land with 3.5 hours of flight time.

Another one of the drones went down in the region in January. The new ISIS photos include one image of a member tinkering with the drone’s components on a workbench.

While ISIS has largely used off-the-shelf drones to drop explosives or record operations for propaganda films on the battlefields of Iraq and Syria, the terror group has also apparently tried to learn from and mimic captured drone technology.

Assyrian forces battling the Islamic State in Raqqa in 2017 said they discovered an abandoned drone-construction site where ISIS members were detailing their research in English-language notes — suggesting Western foreign fighters were running the project that included studying technology recovered from coalition forces.

The Syriac Military Council, part of the Syrian Democratic Forces, released a video at the time with Macer Gifford, the pseudonym of a British trader who fought with the YPG against ISIS, displaying their findings. He tweeted that ISIS’ drone projects at the site were a “total failure but a clear investment in drone technology.” 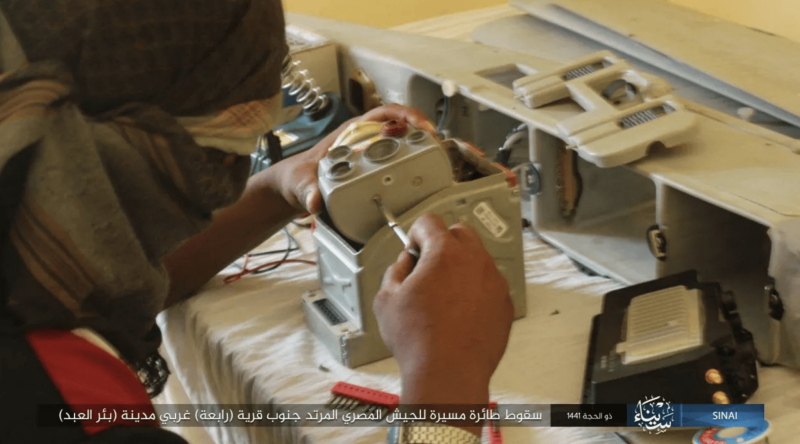 Among the items ISIS recovered from crashed drones was a heavy camera — “a serious piece of coalition equipment” — that Gifford assumed came from a large drone. “All that you can see here is American, in front of me, and there’s been a clear attempt by ISIS to reverse engineer,” he said in the video. “…You actually see some pretty amateurish attempts at copying the American drones.” The facility as a whole, though, was “quite sophisticated” and reflected the first time the British fighter had “ever seen drones that they started from scratch.”

Gifford showed one drone in the production stage that was over 2 feet long and was “very, very light” while accommodating a camera, reflecting “a clear indication that ISIS are really investing in drone technology.”

Earlier that year, ISIS had released its first video showing weaponized drones dropping IED payloads in Iraq while simultaneously filming the strikes. That video showed ISIS using drones in complex attacks: after people responded to the scene of a small explosive being dropped by a drone, a suicide bomber would drive a vehicle to the scene and detonate it.