Swift HALE during its first flight test on July 7, 2020

Aircraft play an essential role in how we study and understand Earth’s surface, climate, and atmosphere. Now, a new commercial unmanned aircraft system (UAS) aims to bring about a powerful way to observe our planet for days or weeks on end.

With the help of NASA’s Ames Research Center in California’s Silicon Valley, Swift Engineering of San Clemente, California, completed a two-hour flight test of their Swift High-Altitude Long-Endurance (HALE) UAS. The applications of the technology – for science, agriculture, and disaster response – could have a real impact on our everyday lives.

Swift’s 72-foot solar-powered HALE weighs less than 180 pounds, flies 10- to 15-pound payloads at a time and is designed to operate at an altitude of 70,000 feet for 30 days or more. Despite its wide wingspan, Swift’s HALE is similar in size to a small general aviation (GA) aircraft but at a fraction of a GA’s weight. Compared to the NASA ER-2, which also operates at a maximum altitude of 70,000 feet and can carry a 2,600-pound payload for missions over 10 hours, the Swift HALE UAS is capable of flying lightweight payloads for days and weeks on end.

“Current NASA science aircraft can meet most – but not all – observing system requirements; HALE aircraft can provide unique data to complement and improve NASA measurements from orbit,” said Matt Fladeland, a researcher at Ames working with Swift on the aircraft. “Developing the HALE with Swift has opened up more possibilities than we initially imagined. The successful flight test is an important first step towards realizing a new capability to support NASA science.”

In 2016, Ames – whose expertise in unmanned systems included aircraft development, airspace integration, and airborne science – partnered with Swift through the agency’s Small Business Innovation Research/Small Business Technology Transfer (SBIR/STTR) program on a proof of concept for a solar-powered UAS. With its expertise in UAS and solar-powered technology, Swift received NASA SBIR awards to develop a unique solution that could sustain flight for a month or more.

Before the aircraft was ready for its first flight test, the Swift team, in consultation with NASA researchers, had to research solar panel and battery technologies to develop a system that could provide enough power to stay aloft at night until it can charge its batteries the next day. The cells also need to retain high power capacity after several recharging cycles. Other design considerations included the need to withstand the harsh temperatures, radiation, and other conditions of the upper atmosphere, and past NASA Global Hawk flights helped to characterize the operational environment. 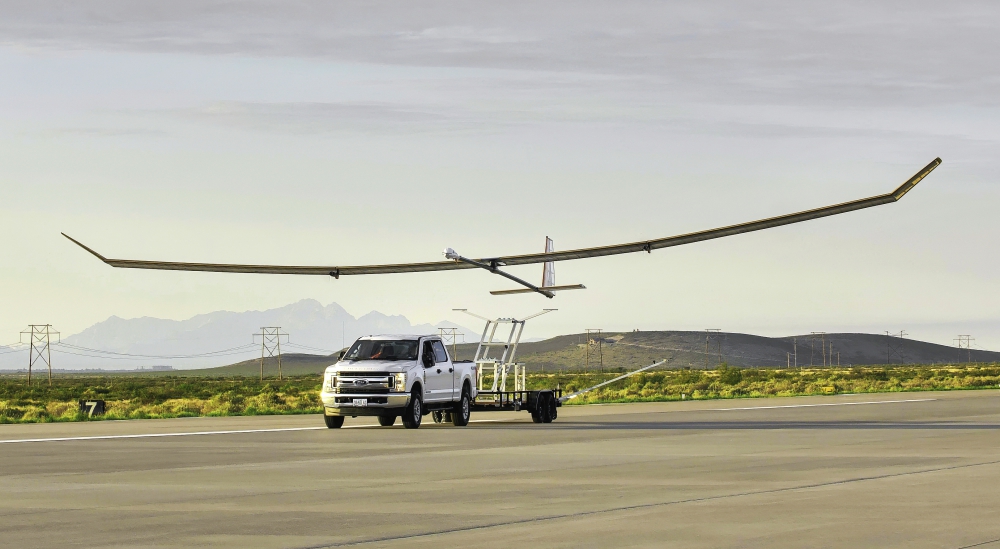 Swift HALE takes off from Spaceport America in New Mexico on July 7, 2020, for its first flight test

During the first of a series of flight tests completed successfully at Spaceport America in New Mexico on July 7, the Swift crew conducted operations at low altitude, passing all systems checks and validating aerodynamic, control, and power system models. By sustaining flight for two hours, the calculations from the flight test provided confidence in the UAS’s ability to maintain missions longer than 30 days. This flight is the first of many that will collect data to further validate the vehicle’s design requirements.

“This program signifies an important partnership with NASA Science and Aeronautics – together, we designed a UAS that fulfills the agency’s use cases and aligns with the Federal Aviation Administration’s vision of how HALE vehicles should be deployed and maintained for extended periods,” said Andrew Streett, vice president of technology at Swift Engineering. “Sustained, long-duration flights are only just becoming a reality with a new generation of batteries and power efficiencies.”

In addition, Swift’s high-altitude, long-endurance UAS verified it could carry a 15-pound payload. For the test flight, the Swift HALE took NASA’s FluidCam, a high-frame-rate video camera coupled with artificial intelligence processing capable of providing unprecedented observations of the coastal ocean seafloor. The flight test with FluidCam has implications for extensive scientific and environmental research of coral reefs.

Aircraft like Swift’s HALE could also augment the observations of satellites orbiting Earth. While a geosynchronous satellite observes a fixed location on Earth on a continental scale, Swift’s HALE can similarly observe Earth on a focused, regional level, faster and more cost-efficiently than a satellite. NASA teams are exploring how aircraft like Swift’s could support air quality monitoring, coastal zone imaging, mapping for landslides and geologically active regions, and real-time data for forest and agricultural monitoring.

This partnership is an example of how NASA’s SBIR/STTR phased funding and collaborative approach stimulates innovation and ingenuity among small businesses. Swift received Phase I and II funding in 2016 and 2017 to develop its idea toward a prototype, which resulted in a successful flight demonstration in July 2020.

The next step in the development will be a Phase III effort to demonstrate taking science measurements at high altitude for days to weeks. If successful, the aircraft could serve as a new operational capability for NASA and other government agencies.