Audi is using a specially developed drone system to locate vehicles that are ready for dispatch at the Neckarsulm site. The flying device flies over the vehicle dispatch area at the Audi site in Neckarsulm autonomously.

The drone uses GPS and RFID technology to identify and save the exact position of all vehicles it flew over, thereby helping Audi employees to plan the necessary steps from completion of the vehicles to dispatch to the customers.

Many different Audi models roll off the lines at the Neckarsulm site every day: the Audi A4 Sedan, the A5 Cabriolet, the Audi A6, the Audi A7, and the Audi A8, as well as the Audi R8 from the Böllinger Höfe. Following production, employees park the vehicles in the designated areas in the plant. Ensuring that each Audi finds its way to its new owner from here requires exact planning from production to dispatch. As of recently, the Audi employees in Neckarsulm are getting help from above with this process. They use a drone that makes it even easier and more efficient to locate the vehicles at the site.

Given that so many different models are built there, the site is one of the most complex in the Volkswagen Group. This makes precise order planning particularly challenging.

“The fast locating of the vehicles creates even higher process quality and is a further stepping stone on the path to digital production. The drone provides support from a completely new perspective. We will now share our experiences with other Audi sites and within the VW Group,”

explained Steffen Conrad, project manager in the area of Innovation Management at the Audi site in Neckarsulm. 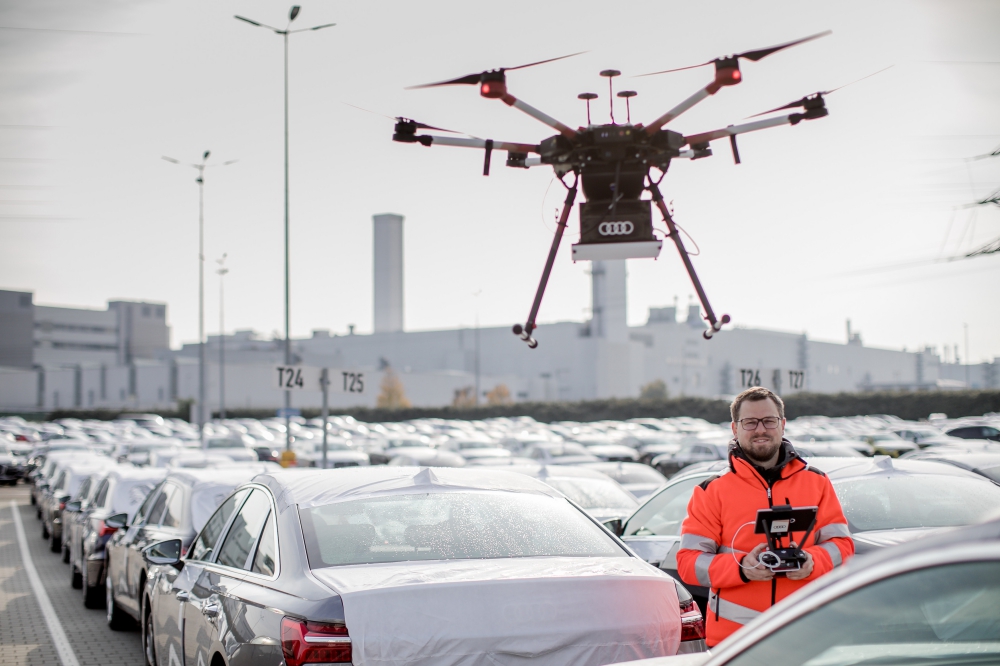 Steffen Conrad, project manager in the innovation management area monitors the drone, which autonomously flies over the shipping areas at the Neckarsulm site

The basis is a technology that the four rings have been using for quite some time: the RFID (radio frequency identification) chip with the associated vehicle identification number that each Audi already receives in the body shop. The specially developed hexacopter, a drone with six propellers, flies over the vehicle dispatch areas on predefined routes at a height of around ten meters (32.8 ft) and determines the exact position of the cars parked there. The drone uses an RFID reader to read out every vehicle while flying directly over the dispatch area and saves the GPS position identified. As soon as the flying device has landed, the data is transmitted to a database via Wi-Fi automatically. After the flight, the result is then displayed on a digital map for the employees.

The drone takes off, flies, and lands in a completely autonomous manner. The trained Audi employees start and monitor the flight from a laptop or tablet. In the event of an emergency, they can use a remote control to intervene in the otherwise fully automatic operation. Four employees have already been trained on how to use industrial drones. As part of this training, they also obtained what is known as a “drone license.”

Before each flight, the drone receives the weather conditions around the plant premises in Neckarsulm automatically. If the wind is too strong or gusty or there is too much rainfall, the drone will not take off. In addition, the software checks the drone’s battery level and battery temperature before each flight. Should something not fall within the specified safety parameters, it will remain on the ground.

The pilot project is currently being transferred to permanent series testing, as part of which the experts at the Neckarsulm site will gather further experience. It is conceivable that drones will be used to locate vehicles at other Audi sites as well in the future.