Senator Tammy Duckworth, a Democrat from Illinois, Tweeted pictures of T1 after a recent tour of MidAmerica Airport, where work on and various testing of the unmanned demonstrator have been going on for more than a year now.

Duckworth said she had visited Boeing’s facilities at MidAmerica last week as part of a larger visit. The airport, which is adjacent to Scott Air Force Base, is situated in the southwestern end of Illinois, approximately 18 miles east of St. Louis in neighboring Missouri. Boeing moved T1, which also carries the U.S. civil registration code N234MQ, there in April 2019 and that’s where it took its first flight five months later.

“Last week I visited @MAAirport, where I met with local officials and viewed the Navy’s new MQ-25 unmanned aircraft system,” Duckworth wrote on Twitter in addition to posting the pictures. “MidAmerica Airport is an important driver of our state’s economy, and I’ll keep working to make sure it has the federal support it needs.” 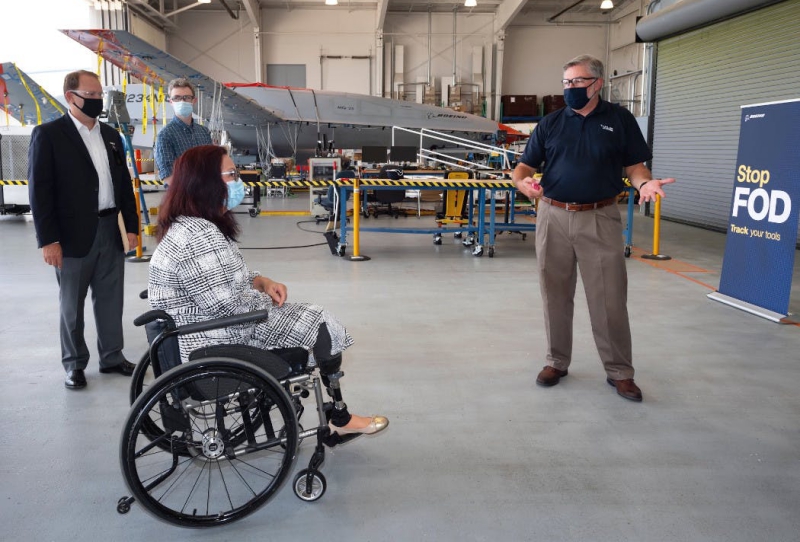 Senator Duckworth is a U.S. Army veteran and former Lieutenant Colonel who lost both her legs when a rocket-propelled grenade hit her UH-60 Black Hawk helicopter during a mission in Iraq in 2004. She was a member of the House of Representatives from Illinois between 2013 and 2017 before winning her current Senate seat. She is now a member of the Senate Armed Services Committee, among other assignments, and is a contender to be Joe Biden’s running mate in this year’s presidential election.