What began as a project to improve land surveying, floodplain mapping, vegetation classification and endangered species management at Joint Base San Antonio-Camp Bullis has become a revolutionary innovation that could save the Air Force millions of dollars and countless hours of labor.
The Air Force Installation and Mission Support Center’s unmanned aerial system project was initiated in late 2019. Then, in March of this year, the Air Force presented a $3 million Small Business Innovation Research Program award for the project.

The award, which was presented to a selected small business, brings the amount of government investments in the program to $6 million over four years. Added to the $50 million in funding from industry and venture capitalists the small business secured, this brings the total investment in the project to $56 million.

That funding has kicked the project, which began as an effort to protect the habitat of an endangered species, into high gear.

“The entire project revolves around the golden-cheeked warbler, which is present on JBSA-Camp Bullis,” said Paul Jurena, natural resources specialist, Air Force Civil Engineer Center. “Nesting of this species occurs here, and in the central region in Texas.”

“As a federal agency, the U.S. Air Force is responsible for reporting any activities that could impact the species, especially during breeding season, March through June, to the U.S. Fish and Wildlife Service. They are responsible for enforcement of the Endangered Species Act,” Jurena said.

Prior to the AFIMSC project, surveying the habitat conditions at JB San Antonio-Camp Bullis was a timely process.

“Sending government or contract representatives physically into an environment to examine and study the habitat can be grueling work, as well as costly,” said Dustin Dickens, AFIMSC Innovation Office UAS project manager.

“Sending Unmanned Aerial Systems instead can usually accomplish mapping and studies of the habitat much faster and more efficiently, which in turn provides a cost saving,” Dickens said.

While saving time and money is an important part of the project, making sure assessments are accurate is essential to continuing military training activities at JB San Antonio-Camp Bullis.

“The biological opinion provided by USFWS to Camp Bullis dictates the minimum size of habitat needed for this species, as well as the basic biologic parameters to measure,” Jurena said. “It requires JBSA to assure a minimum of 5,000 acres of suitable habitat based upon tree size, species, and density parameters. With the new UAS technology acquired through the SBIR award, the process should be faster, and much more accurate.”

“The UAVs, depending on their sensors, can identify and determine parameters that the human just cannot, which increases accuracy and identification of specific habitats,” Dickens said. “The systems also support machine learning algorithms, or artificial intelligence programs, that can learn from data and improve from experience, without human intervention.”

The ability to achieve repeated results is also important to the effectiveness of the project.

“By having data about the habitat that is repeatable, and can be easily gathered through a UAS, makes for easier determinations on where the breeding habitats are, and thereby, benefiting JBSA and their training mission,” Jurena said. “This platform can give installation biologists better ideas of where the habitats are and can identify those areas that need further evaluation.”

This information is important to those who train at JB San Antonio-Camp Bullis.

“Once the habitats are assessed, the location and identification of habitats give mission and training personnel knowledge of where they need to avoid,” Jurena said.

The testing accomplished thus far has involved a small-scale UAS with multi-spectral imagery and light detection and ranging, or LiDAR, sensors to classify habitat suitability for the golden-cheeked warbler, Jurena said. 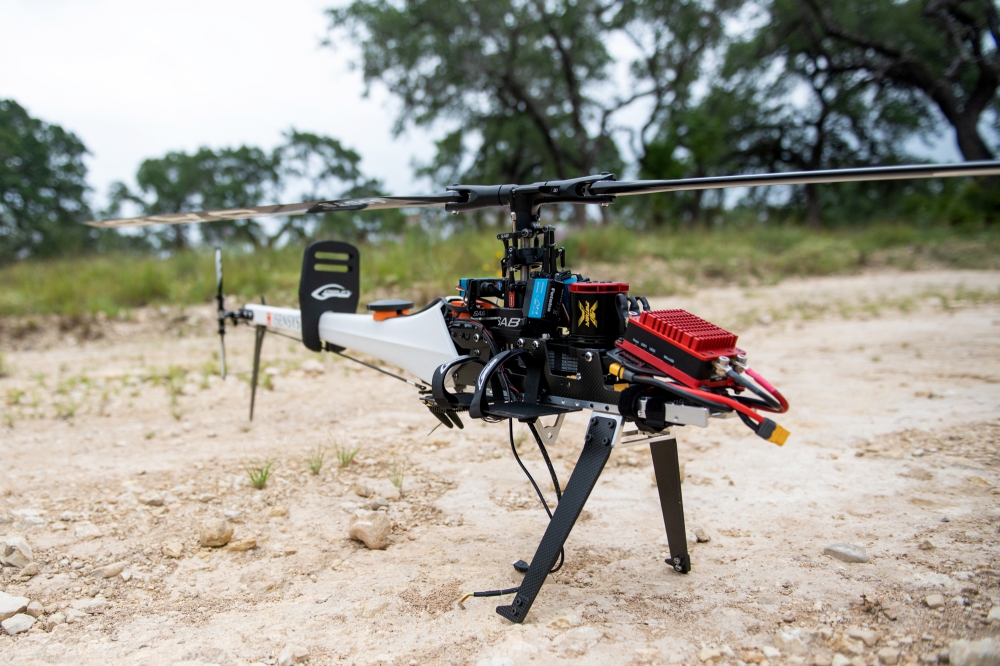 An unmanned aerial system is set up in preparation for a test flight July 9, 2020, at Joint Base San Antonio-Camp Bullis, Texas.

During a recent outing with the UAS, July 9 and 10, the results were positive.

“Overall, the flights were a success and the results are very promising,” Dickens said. “AFIMSC and Air Force Civil Engineer Center are working toward a path for additional testing. Once complete will have a better understanding of the needs and feasibility for wide-scale implementation.”

The ability to utilize the technology and the data collected across a wide variety of agencies is what makes the completion of testing and beginning of implementation so important.

“Once fully operational, the cloud-based platform utilized with the UAS will allow multiple users to access and use the information collected for their requirements,” Dickens said.

As testing continues, the UAS’ capabilities will continue to improve and will broaden to expand its usefulness.

“The UAS platform flown July 9 and 10 provided LiDAR data for further refinement of habitat classification that was not possible with just regular and multi-spectral imagery from last year’s UAS flights,” Jurena said.

Once all processes are proven, Jurena said the team’s innovation will quickly be shared with others who may benefit.

“If the UAS/UAV methodology works well here, it could help other Department of Defense installations,” he said. “It can provide another survey tool for USFWS and state biologists to assess this species at their refuge sites, as well as multiple other uses. In addition, future classifications of the program’s UAS could include their use for infrastructure inspections, to detect water and fuel leaks, and other routine inspections,” Jurena said. “This really is a win-win for the Air Force and the Department of Defense.”