“This is a major milestone for the MQ-9B system and the Protector Program,” said Linden Blue, CEO, GA-ASI. “We look forward to delivering this new generation of MQ-9 to the Royal Air Force (RAF).”

GA-ASI’s MQ-9B SkyGuardian is the baseline system that will become the Protector RG Mk1 when configured for the RAF. This configuration includes X-band satellite communications (SATCOM) and UK weapon systems.

The contract covers a total of 16 aircraft (initial order of three platforms with an option for an additional 13) and seven Ground Control Stations (GCS), together with associated ground support equipment. The first system will be delivered in 2021, though it will remain in the U.S. to be utilized in the test and evaluation program.

“Protector will be deployed in wide-ranging Intelligence, Surveillance, Target Acquisition and Reconnaissance (ISTAR) operations where its ability to fly consistently for up to 40 hours will offer a vastly improved ISTAR capability. Given that it is designed to fly in non-segregated, civil airspace, the Protector RPAS will also be able to support multiple civilian missions, including search and rescue and disaster response missions,” said Group Captain Shaun Gee, the RAF’s Director Air ISTAR Programmes.

GA-ASI’s development of MQ-9B began in 2014 as a company-funded program to deliver an RPA that meets the stringent STANAG-4671 UAV System Airworthiness Requirements, which provide the basis for type certification by NATO member-state military airworthiness authorities. The MQ-9B is provisioned for the GA-ASI-developed Detect and Avoid System (DAAS) and is built for adverse weather performance with lightning protection, damage tolerance, and de-icing system. It features rapid integration of new payloads with nine hard points. The aircraft can “self-deploy” using SATCOM-enabled Automatic Takeoff and Landing, which eliminates forward-based launch-and-recovery equipment and personnel. In addition to the SkyGuardian, MQ-9B is also available as the SeaGuardian for maritime missions.

Announcing the contract at today’s 2020 Air and Space Power Conference, UK Defence Secretary Ben Wallace said the aircraft will extend the reach of the Royal Air Force (RAF) and provide another boost to the UK’s arsenal of unmanned systems.

Protector is projected to enter into service in 2024, delivering a ‘step-change’ in capability for the RAF. The aircraft is the first certified RPAS meaning it can be flown in unsegregated airspace including civilian airspace using what the MOD calls a “ground-breaking detect and avoid” system. 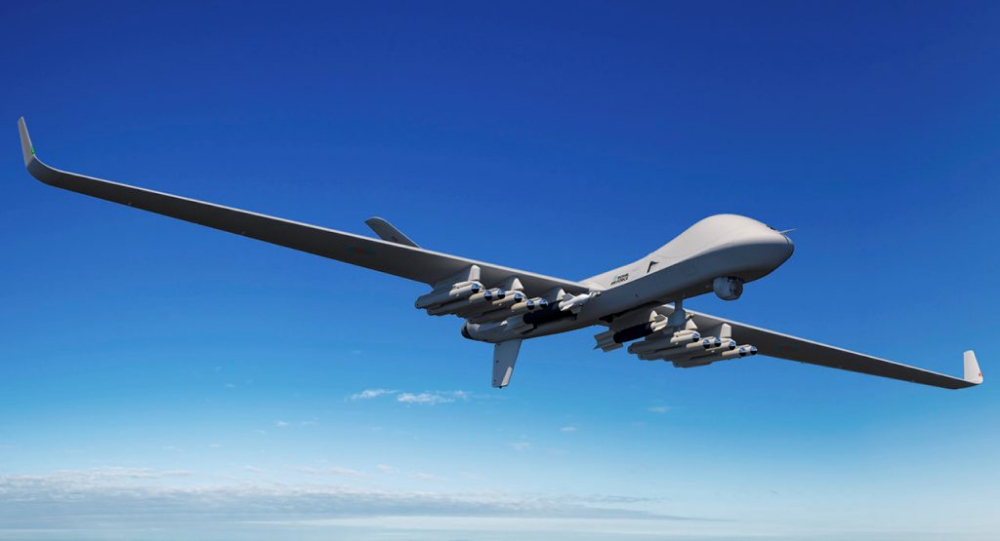 Protector is slated to replace the Reaper RPAS and will undertake Intelligence, Surveillance, Targeting and Reconnaissance (ISTAR) operations out of RAF Waddington in Lincolnshire. RAF Waddington is home to several RAF unmanned aerial systems (UAS) operations including 216 Sqn which is working on swarming drone capabilities.

Commenting on the contract, Wallace said:

“The UK is proving once again that we are a world leader in defence technology. Protector will provide the RAF with vast global reach, meeting the UK’s defence and security needs for decades to come, and provides another increase to the unmanned inventory for the armed forces.

“This aircraft will upgrade a whole range of lethal capabilities allowing us to control, protect and manage the battlespace from the air for hours on end.”

The contract signed with General Atomics includes three ground stations and associated support equipment as well as the option to purchase another 13 aircraft, to complete the RAF’s planned fleet of 16 Protector aircraft. Double the outgoing Reaper fleet.

“I am delighted to announce that we have got Protector production on contract. The DE&S team have demonstrated their remarkable resilience and overcome considerable challenges to ensure this significant programme remained on track.

“Their efforts and the collaborative commitment from industry means that the RAF can still look forward to the delivery of the cutting-edge Protector and the step-change in capability that it brings.”

The MOD added that the aircraft’s ability to fly in civilian airspace could expand its capabilities and if requested be used to support civilian agencies with search and rescue operations.