Pakistan’s Ministry of Science and Technology and Abn Satuma (Pvt) Ltd have signed a MoU for development of UAVs/drones for agriculture applications. The drones will specifically be used for countering locust attacks.

Federal Minister Fawad Chaudhry represented the Ministry of S&T at the signing ceremony. 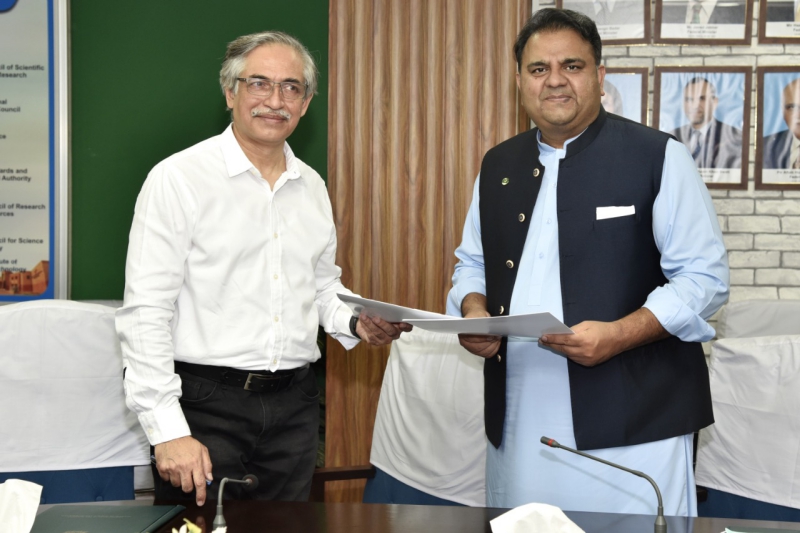 He said this is the first time drone technology will be used for agriculture purposes in Pakistan. He said this drone will take five minutes to spray the crops and it can bear a 16KG load easily. He said that they are handing over this technology to the National Disaster Management Authority (NDMA) to fight against the locust swarms. He said the Ministry of Science and technology is also working on similar kinds of technology.

Explaining the drone’s mechanism, Chaudhry said that earlier the entire field had to be disinfected but with the help of the drone, the sensors will detect the infected patches and spray pesticides directly on them.

“The ministry is now focusing on precision farming with the introduction of drone technology to enhance agricultural productivity,” he said, encouraging youngsters to work on agri-tech startups.

Dr Suleiman Ashraf, CEO of Surveillance and Target Unmanned Aircraft (ABM-SATUMA), said the company that has been working with the country’s defense industry for over two decades has decided to develop drones for the agriculture sector to help farmers save crops and achieve efficiency.

The hexacopter drone has six propellers and has a carrying capacity of about 16kg, which means it can spray up to 16 litres of pesticide in about 15-18 minutes. The drones designed and manufactured in Pakistan will reduce the time and cost of farmers while saving crops and protecting farmers from exposure to harmful chemicals with efficient spraying, Ashraf said.

“The manual spraying that takes more than one hour can be done in 5 minutes using the drone.”

The farmers can now take full advantage of drone technology to save crops. The drones are simple, fast, affordable and easy to use, according to the experts.

The local production has reduced the cost of agricultural drones by one-third. But can the farmers afford the drone?

“Farmers don’t have to buy or own the drones. We would introduce a rent-a-drone service similar to Uber, that would connect farmers with the drone as per their requirement,” Chaudhry explained.