The Office of the Under Secretary of Defense for Research and Engineering – Global Capability Programs Office, Foreign Comparative Testing Program – recently partnered with the U.S. Army Futures Command to test and evaluate a foreign technology for use in UAS.

AFC’s Combat Capabilities Development Command Army Research Laboratory tested the French Danielson aircraft engine at various altitudes to verify its performance and determine if it is a viable option to replace the medium range tactical UAS engine the Army currently uses. The Army engine, which was originally developed for ground vehicles and modified to fit UAS, will be phased out of manufacturing.

“UAS need to operate at altitudes where the air is thin and temperatures are cold. The Danielson engine was tested successfully at altitudes Army UAS operate,” said Dr. Kenneth Kim, mechanical engineer at CCDC ARL.

The FCT program provided the funding to procure and test the Danielson engine at the CCDC ARL Vehicle Technology Directorate Small Engine Altitude Research Facility. The facility, which is located at Aberdeen Proving Ground, Maryland, can simulate altitudes up to 30,000 feet and temperatures as low as -40 degrees Fahrenheit. The facility also has state-of-the-art data acquisition, engine control and precision measurement equipment.

“The requirements for UAS engines are very different than those for ground vehicles, so UAS engines should be designed from scratch to meet the requirements. The significant benefit for the Army with this project is we were able to verify and characterize an engine that can be used now instead of developing a new engine for UAS,” said Mike Kweon, ARL’s Versatile Tactical Power and Propulsion Essential Research program manager. 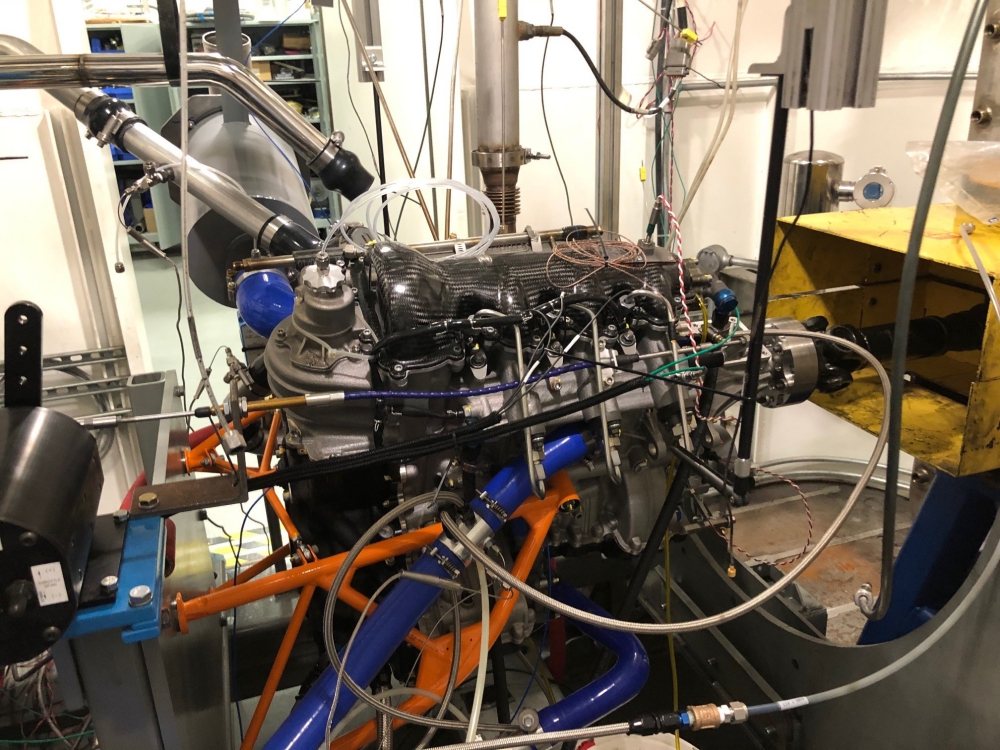 The Danielson engine, which was designed by Danielson Aircraft Systems in France, met speculations to operate with Army UAS. Two prototype engines were purchased by ARL, with funding from the FCT program. The Danielson engine has a serial two-stage turbocharger that provides increased boost pressure at altitude conditions, which enabled the engine to operate with less stress and carry a larger payload when it was tested at CCDC. The dual turbocharger also reduces the risk of bearing or turbocharger failure by operating at lower revolutions per minute – a measure of how fast a machine is operating at a given time – than its original design limit. The Danielson engine is light weight, which provides higher power density for enhanced take-off capability.

The project supports the Army’s Future Vertical Lift modernization priority, which focuses on critical technologies required for future vertical lift to retain air power in multi-domain operations. UAS will be launched from current platforms such as an Apache attack helicopter or a Gray Eagle unmanned aerial vehicle, or from platforms still in development. These platforms will contain a variety of payloads to degrade or destroy enemy UAS and provide support to troops on the ground.

Other partners in the project include: CCDC Aviation and Missile Center, which identifies airworthiness requirements to certify engines; and PEO Aviation-Program Manager UAS, which manages and operates Army UAS aircrafts. Additionally, the U.S. Air Force Research Laboratory, Center for Rapid Innovation has expressed interested in the results, which takes the effort a step further toward joint capability, an important aspect for the FCT program.

“The biggest challenge on the technical side was when an engine was damaged during testing. This exposed the engine’s vulnerability, which turned out to be beneficial because it gave us the opportunity to redesign the engine for enhanced reliability. Danielson showed not only their capabilities, but also their ability to change the engine based on ARL’s recommendations. This project, which was initiated by the FCT program, will go even further as ARL collaborates with Danielson to develop component technologies that will enhance future UAS capabilities,” Kim said.

The congressionally authorized OUSD (R&E) FCT Program provides an opportunity for DOD engineers, scientists and program managers to receive funding through a competitive process, which can be used to acquire, test and evaluate mature items and technologies from the industry of allies and other friendly nations that may fill a capability gap and or satisfy an urgent need. The program, which is executed for the Army by CCDCs Global Technology Office, encourages international cooperation and helps reduce the DOD’s overall acquisition costs.

The U.S. Army Combat Capabilities Development Command, formerly known as the U.S. Army Research, Development and Engineering Command, has the mission to lead in the discovery, development and delivery of the technology-based capabilities required to make Soldiers more lethal to win our Nation’s wars and come home safely. The command collaborates across the Future Force Modernization Enterprise and its own global network of domestic and international partners in academia, industry and other government agencies to accomplish this mission. CCDC is a major subordinate command of the U.S. Army Futures Command.