Moroccan Apaches to Get Video from MQ-1 Predator 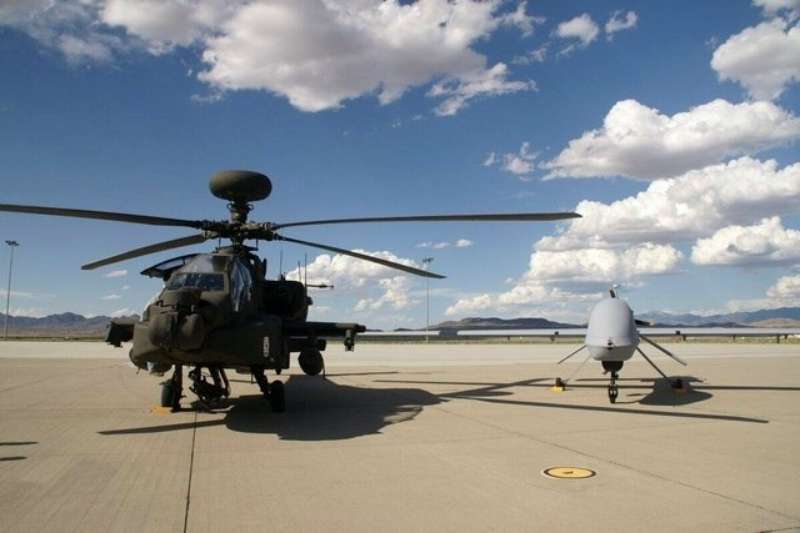 The multi-billion dollar Moroccan deal for AH-64 Apaches also includes acquisition of manned-unmanned teaming kits (MUTKs) that will enable the gunship to collaborate with surveillance drones.

The kit would allow an Apache pilot to control the operations and receive video feed of a nearby drone, making the Moroccan Apaches one of the deadliest outside the United States.

The Manned-Unmanned Teaming (MUM-T) capability was first fielded in 2009. The Army’s primary MUM-T system consists of the Apache A-64D/E as the manned system, the MQ-1C Gray Eagle or RQ-7B Shadow as the unmanned aircraft system (UAS), the One System Remote Video Terminal (OSRVT), which transmits video and data, and the One System Ground Control Station (OSGCS) which allows soldiers to control UASs from the ground.

Morocco currently has four MQ-1 Predator remotely piloted aircraft in its inventory. The MQ-1C Gray Eagle, the drone that can be linked with AH-64 helicopter, was developed based on the Predator.

“Apache helicopters, teamed with Gray Eagle and Shadow are a winning combo. The Army is upgrading its Apache fleet to the E models, which are the ones that can be teamed with drones because of their higher level of sophistication,”

The capability provides full-motion video in an AH-64E Apache cockpit from the aforementioned UASs.

While Soldiers usually pilot UASs from OSGCSs, the Apache pilots are increasingly able to interact with the UASs at varying levels of interoperability (LOIs): LOI 1 is indirect receipt of UAV payload data, meaning not much interaction; LOI 2 is when the pilot has direct receipt of UAV payload data and is in direct communication with the UAV; LOI 3 is where the Apache pilot can actually fire a UAV missile; LOI 4 turns flight control over to the Apache pilot; and LOI 5 covers the full spectrum of flight, including launch and recovery.

While the ground operator always has all five levels of control, the Apache pilot can request a particular level.

According to the U.S. Army, the MUM-T capability also offers multiple levels of control of the UAS, from the ability to view and control the electro-optic payload and laser designator to remotely controlling the vehicle’s flight. These systems allow the MUM-T operator to identify and fix the laser designator at targets, allowing HELLFIRE and other smart missiles to guide to and destroy the target. MUM-T is enabled by the Mini-Tactical Common Data Link, which transmits UAS or aircraft sensor video to a ground or airborne One System Remote Video Terminal. With this capability, UAS can provide reconnaissance, targeting and security to an Army brigade.