As pollinators, bees are hard to beat. Still, that hasn’t prevented researchers from working on a high-tech alternative: drones that blow soap bubbles to transport pollen to a flower. It’s a “really cool” approach, says Henry Williams, a roboticist at the University of Auckland, who was not involved in the work. But some biologists are skeptical that drones will ever be an effective replacement for bees.

Several groups have devised devices that mimic pollinating honey bees. In 2017, Eijiro Miyako, a materials chemist at the Japan Advanced Institute of Science and Technology, adapted a 4-centimeter-long toy drone to pollinate flowers. He and colleagues glued horsehairs to the underside of the drone and coated the hairs with a gel to make them stickier and more flexible. The idea was that, just as on a bee, the hairs would pick up pollen from one flower and deposit it on another. Steered by remote control, the drone pollinated lilies, but it damaged the flowers with its propellers.

Miyako visualized a way to fix that problem while blowing bubbles in a park with his 3-year-old son. The child had cried when Miyako used up the last of the bubble solution. To soothe his son, Miyako bought a toy bubble gun. Watching the stream of bubbles—and seeing one bump his son’s forehead—Miyako thought it might be a way to gently deliver pollen to flowers.

He and a colleague tested various surfactants—detergents that create the soapy film that form bubbles—and picked the one with the least effect on germination (the ability of the pollen grains to grow the tubes that deliver their sperm cells to the ovaries). Then, in lab tests, they bombarded pear flowers with pollen-laden bubbles. When the bubbles popped, the pollen landed on the pistil, the female reproductive part, and the grains grew pollen tubes. But the tubes were shorter than normal if more than 10 bubbles hit the flower, perhaps because of some adverse effect caused by the soap solution, Miyako says. 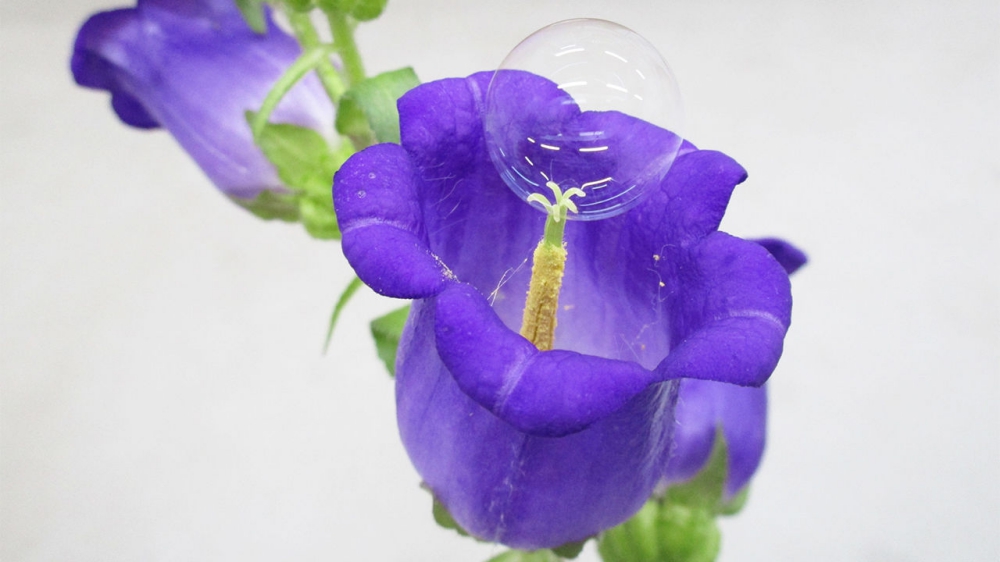 In a pear orchard, the researchers used a toy bubble gun to blow pollen-laden bubbles on flowers in three trees. After 16 days, the resulting fruit was just as good as that of flowers that had been pollinated by hand, they report today in iScience. The farmers in this orchard, and elsewhere in Japan, traditionally pollinate their pear and apple trees by hand with a feather brush. Miyako says that’s because bees don’t pollinate in low temperatures, and because they sometimes damage the flowers in a way that results in malformed fruits.

One advantage of using bubbles rather than feather brushes is that the bubbles require a lot less pollen. A feather brush, the researchers found, applies about 1800 milligrams of pollen to each flower, whereas the bubbles needed only 0.06 milligrams. That means farmers would have to gather far less pollen before manually pollinating their flowers, if they’re adding it to a soap solution.

Williams says those savings could be important in some situations. With economy in mind, he helped develop a pollinating robot the size of a golf cart. It can drive through a kiwi orchard with a moveable boom that identifies individual kiwi flowers and pollinates them with a liquid sprayer.

“Pollen was a substantial cost during the pollination season, and minimizing pollen usage was the primary motivation for the project,” he says. Because the robot precisely targeted the spray onto flowers, it used less pollen than hand-held sprayers or air blowers. Bubbles might have promise for further savings, he says.

Miyako is also working with robots, although much simpler. His team attached a bubble sprayer to an aerial drone and programmed the drone to fly a route around a row of fake lily flowers (see video, above). After trying various speeds and heights, they found that the drone could hit 90% of the flowers with bubbles.

The problem was that a lot of bubbles missed their targets, wasting pollen. Better targeting—by having a drone that could identify flowers, for example—might improve the results, Miyako says. He’s also working on concocting an environmentally safe soap bubble solution that would biodegrade faster.

Yu Gu, a roboticist at West Virginia University, is skeptical about the use of drones to deliver bubbles, however. The wind from the rotors will make it hard to precisely aim the bubbles, he points out. They could be more efficiently delivered from a ground-based robot, such as a wheeled unit with a manipulator arm. Gu and colleagues have just this kind of robot, originally designed for collecting samples on space missions. And they’ve tested it by pollinating raspberries in a greenhouse. It uses a fine brush to both collect and distribute pollen, saving the step of having to gather a supply of pollen.

Simon Potts, an agro-ecologist at the University of Reading, worries such efforts will distract from conserving bees, which are declining in many places. The bubble approach adds the risk of chemically interfering with pollination and polluting soil, he notes.

“This is yet another piece of smart engineering being shoehorned to solve a problem which can be solved in many much more effective and sustainable ways.”