A trial with the use of drones will begin at Schiphol. During the trial, there will be drones with cameras for inspection of taxiways, small buildings and aircraft and drones that transport light goods between different locations at the airport.

In this way, the potential benefits of drones are explored, for example, to inspect structures like the asphalt surface, perform operational processes such as de-icing and supply aircraft parts for maintenance. The trial will examine if this is desirable and feasible in the future. Tests will be conducted through 24 June in collaboration with Air Traffic Control the Netherlands (LVNL), Dutch Drone Delta, the Royal Netherlands Marechaussee, and Transavia.

Regulated use of drones will be permitted at Schiphol through 24 June, thanks to a temporary regulation introduced by the Ministry of Infrastructure and Water Management that lifts the ban on regulated use of drones by designated parties in Schiphol’s operations. The Human Environment and Transport Inspectorate then gave a positive assessment of the specific applications. All other bans and obligations will continue to apply. The flights will be conducted in coordination with LVNL by certified parties who have direct contact with the air traffic control tower. Any other use of drones by unauthorised persons in the vicinity of Schiphol will remain expressly prohibited as usual. LVNL took the lead in obtaining this temporary arrangement. Like the other parties, they saw the opportunity arise amid a significantly lower amount of flight movements due to the coronavirus crisis.

Our plan is to integrate drones into our airspace in the future so that unmanned and manned aircraft can operate safely side by side. That is a challenging task. We see the current, quieter airspace as an opportunity to practise this and test procedures. In this trial, we can gain initial experience regarding how to safely fly both manned aircraft and drones at Schiphol. 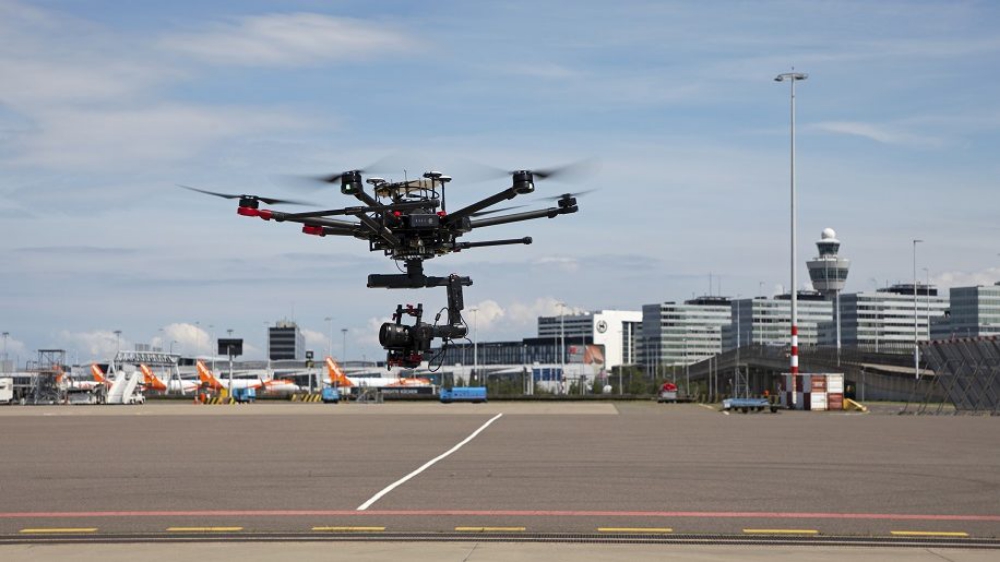 The tests will take place at a safe distance from runways and taxiways that are being used for air traffic. There will be visible testing on the various designated platforms and at various heights with different drones. The aim of the trial is to show how the procedures designed for the use of drones at airports work in practice.

There is currently 85% less air traffic at Schiphol compared to the same period last year. This is extremely unpleasant for airlines and many travellers, but also gives us the opportunity to carry out a test like this. Based on this trial, we would like to find out if using of drones is helpful to organise processes more efficiently, sustainably and effectively. We are pleased with the temporary arrangement and proud that – together with our partners – we have been able to set up this trial so quickly.

A safe combination of drones and manned aircraft

Drones and manned aircraft will increasingly share airspace in the future. The most concrete form of this interaction will take place at airports, so conducting this trial is an important step. During the trial, Dutch Drone Delta will be looking at the procedures and techniques as well as the public support. What do visitors and staff at the airport think about drones flying around?