As part of a larger potential recovery plan to help the French aerospace industry cope with the current economic crisis, the French ministry of the Armed Forces announced on its Twitter account that the procurement of rotary and fixed-wing unmanned aerial vehicles (UAV) for the French Navy will be made ahead of schedule.

As reported by the public report released by the Ministry of Armed Forces, a total budget of € 600 million have been allotted for this recovery plan which also covers the early procurement of 3 A330-MRTT; 1 ISTAR aircraft and 8 H225M helicopters for the French Air Force. This measure will save 15 jobs over two years.

SMDM systems are supplied by the SME SurveyCopter. The French company has been chosen to procure the light fixed-wing UAV Aliaca to the French Navy.

The VTOL UAV that will be procured for the French Navy is the VSR700 as part of the SDAM program. The Cabri G2 civilian helicopter from PME Guimbal is adapted to military needs and to the marine environment by NavalGroup and Airbus Helicopters. This future rotary-wing UAV by Airbus Helicopters is set to be deployed aboard the future FDI frigates of the French Navy.

For the record, Hervé Guillou, President of GICAN (the French Marine Industry Group) was auditioned on May 14. by the French Senate Committee on Foreign Affairs, Defense and Armed Forces to debate on the role the naval industry could play in the French economic upturn. Furthermore, Marine Nationale’s Chief-of-Staff Admiral Christophe Prazuck announced his wish to see 1200 drones in the French Navy by 2030 last year.

ALIACA is an electrically-propelled UAV developed by SurveyCopter. It has a 3h flight endurance for a range between 10 and 50 Km. It can perform intelligence gathering (ISR); coastal surveillance; surveillance of sensitive areas. ALIACA UAV is fitted with a gyro-stabilized turret, installed in a vertical position and providing the UAV with a 360° panoramic coverage. The UAV system should be able to be deployed in less than 10 minutes with a maximum payload of 1.1 Kg. 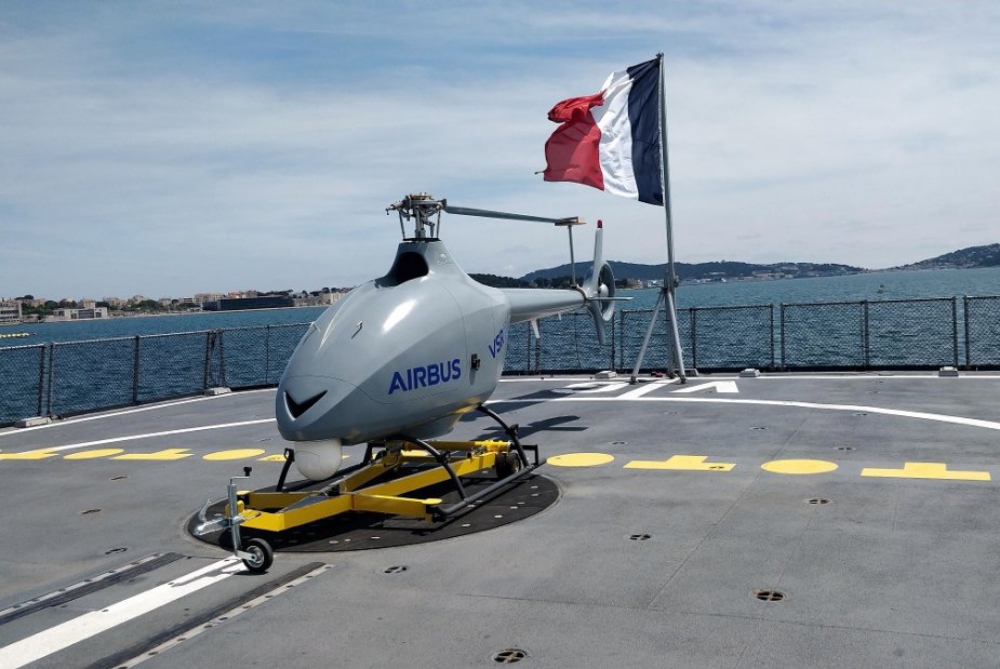 VSR700 VTOL UAV aboard a FREMM

A versatile and affordable platform, the VSR700 has been developed by Airbus Helicopters with a view to providing military customers with a solution that leverages a tried and tested civil aircraft and strikes the best possible balance between performance, operational flexibility, reliability and operating costs. Harnessing autonomous flight technologies that have been tested by Airbus Helicopters through a range of demonstration programs, the VSR700 is derived from a light civil helicopter, the Cabri G2 (developed by the company Hélicoptères Guimbal), which has proven its reliability and low operating costs in service.