Birdwatching drones are taking to the skies of New Zealand to help scientists track the endangered kākāpō, which teeters on the brink of extinction.

A few hundred years ago they were one of New Zealand’s most common birds before being hunted, killed by introduced pests and losing their forest homes to farming. Now there are only 211 adult birds left.

The nocturnal, flightless parrot is one of Kiwis’ favourite birds and is known for its charismatic nature and owl-like face.

Because the population is so small every kākāpō has a name – including Ruth, Hoki, Suzanne and Zephyr – and the population is subject to one of the most intensive management programmes of any species in the world. Infertility and inbreeding have been long-term issues for the birds’ reproductive efforts.

All of the birds now live and breed on predator-free offshore islands, where they are tagged with radio monitors to allow scientists to tramp into the bush and assess their health and wellbeing.

But that process has been slow, expensive and time-consuming for the Department of Conservation, with the kākāpō’s preferred habitat remote and often inhospitable bushland.

“We can’t always get signals from the ground, so it often takes many days to find the birds,” says Dr Andrew Digby, the scientific adviser for DOC’s kākāpō recovery programme. “That is a huge time sink and it means that we can lose track of where the birds are all together.”

Digby said that if scientists failed to find a bird for many days they hired a helicopter or plane – at great expense – to search larger areas.

“But that still doesn’t give us good locations for individuals. It just confirms we can pick up a signal,” he said.

Enter Wildlife Drones: deployed to the skies to locate the birds in record time; a boon for scientists who say the drones allow them to monitor the birds more accurately, thoroughly and frequently.

The drone trial took place on Whenua Hou/Codfish Island earlier this year and involved up to five flights a day over three days. Digby says he has “always dreamed of using drones in kākāpo work”.

“I think it will become common very soon. It’s less intensive and less invasive. Having people walking around the Island causes a lot of disturbance for the animals, but a drone 100m up in the air is hardly noticeable.”

Dr Debbie Saunders, CEO of Wildlife Drones, an Australian startup, said drones were able to track and trace large numbers of kākāpō at the same time – up to 40 animals on one flight.

“We got really clear locations for the birds, including those that were over the edge of rugged cliff lines and in other inaccessible corners of the island,” Saunders said.

Digby said drones could have myriad other uses in wildlife conservation in New Zealand where the terrain is often challenging for humans to travail. Māori conservation advisers had also been pleased with how they left precious cultural landscapes untouched. 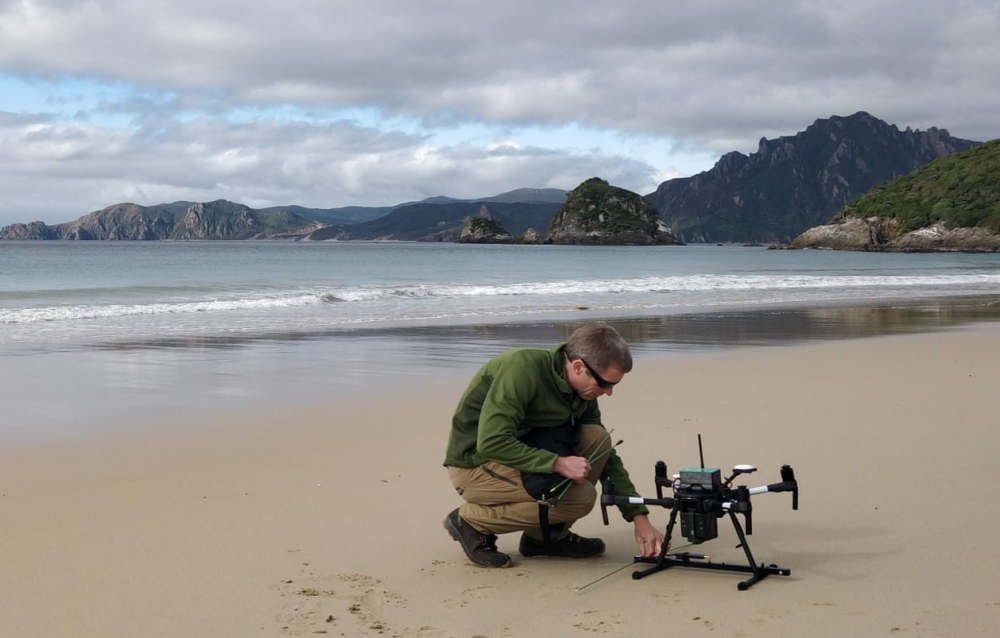 “I’ve been impressed by how accurate the locations are and how much data can be collected rapidly,” Digby said.

“From just a couple of rotations of the drone we can get good locations on multiple birds. It’s faster than the triangulations that we do by hand and provides high-quality data we can include in our database.”