A University of North Dakota graduate student and his adviser are using drones to find duck nests and monitor the behaviour of nesting ducks in the Missouri Coteau country of central North Dakota.

Working out of Ducks Unlimited’s Coteau Ranch and the adjacent Davis Ranch owned by The Nature Conservancy, graduate student Mason Ryckman and Susan Felege, associate professor of Wildlife Ecology and Management at UND, will use both fixed wing and quadcopter unmanned aerial vehicles fitted with high-tech cameras to monitor nearly 60 duck nests — they hope — on the Coteau and Davis ranches in central North Dakota this spring and summer.

Miniature surveillance cameras set next to the nests will provide further information on duck nesting behaviours.

“There’s a lot of interest in using drones for survey methodology” such as pair counts and other surveys that wildlife managers conduct each spring, Felege said. “In addition, there’s been a large push to think about using something like thermal imaging cameras to be able to find nests.”

Preliminary fieldwork is just getting underway to iron out some of the glitches with equipment and software, said Ryckman, who will spend much of the summer in the field. Depending on how things go, Felege says she might be out there a couple days a week. Staff from Ducks Unlimited’s Great Plains Regional Office in Bismarck also will be helping out.

Felege and various students have used surveillance cameras to study duck nests in the coteau country for the past six years through a partnership between DU and UND, with funding from various sources, including Ducks Unlimited, UND College of Arts and Sciences, Enbridge Ecofootprint Grant Program and the Minnesota Association of Resource Conservation and Development Councils Inc.

This will be the first full summer of research using drones on a broad scale. Felege’s previous experience with using drones for waterfowl research includes studying snow geese along the Hudson Bay coastline near Churchill, Man.

Ryckman and Felege did some preliminary flights last summer, flying about a dozen nests with both fixed-wing and quadcopter drones to see how the ducks reacted. A state critical needs grant from UND’s College of Arts and Sciences helped offset equipment costs and Ryckman’s time in the field last summer.

Staff from the Rochester Institute of Technology in New York also collaborated on some of last summer’s preliminary research, Felege said, bringing out a drone equipped with sophisticated hyperspectral imaging designed to capture the wavelengths of different vegetation and LIDAR — short for Light Detection and Ranging — that measures light and wavelengths to form 3D images of what’s below.

Preliminary results from last summer’s research yielded some surprising results in terms of how nesting ducks responded to the aircraft, Ryckman said.

“What we found out was that most of the hens were actually kind of tucking down and hanging out pretty much, just kind of chilling,” he said. “They acted like they were trying not to get detected, which is something we weren’t really expecting.

“We were kind of expecting them to either have more of an alert behavior and either flushing or head bobbing.” 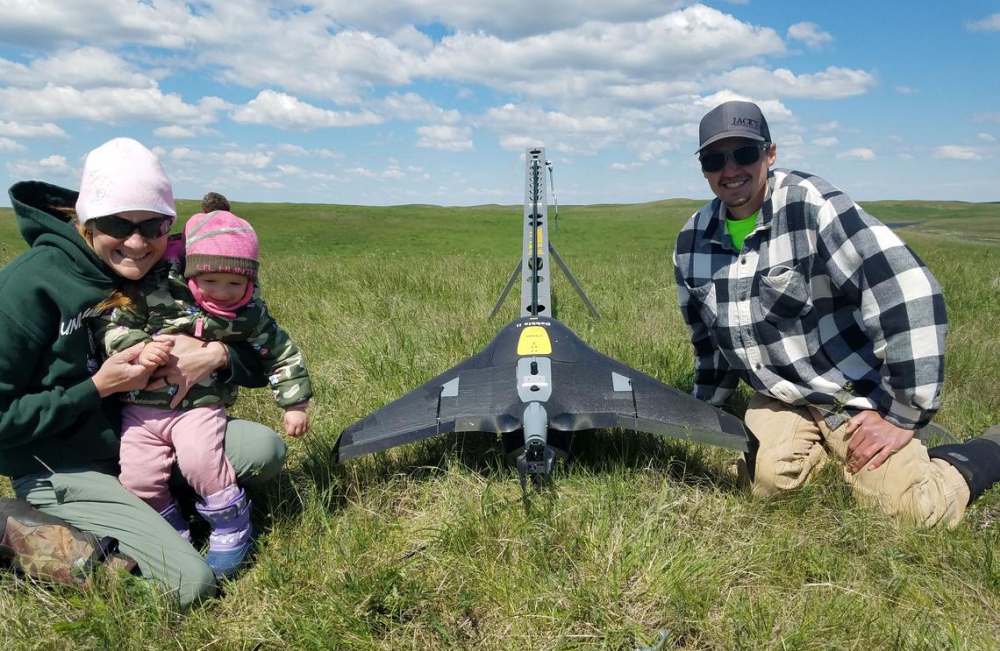 Using thermal cameras to detect ducks also proved challenging because the birds are so well insulated, Felege said. As a result, the “heat signature” the ducks emit isn’t strong, she said, so time of day could be crucial to determining when the birds are easiest to detect.

Theoretically, the nests could be most visible to thermal imaging before dawn, which is when ducks such as mallards and blue-winged teal — the focus of the coteau research to date — generally leave the nests.

Ideally, the research will help in developing a protocol for researchers who use UAVs to study waterfowl Ryckman said.

As with everything else on the planet these days, the COVID-19 pandemic will affect this spring and summer’s field season. Plans to send four undergraduate interns to help with the project have been scrapped, Felege said, and social distancing guidelines will have an impact on everything from travel to housing.

“I have to send every person that goes out there in a separate vehicle, and we have to keep spacing apart, and we have to disinfect equipment in-between people using them,” Felege said. “So, for the most part, what I do is assign everyone a vehicle and their own specific spotting scope.”

There’ll be at least two or three people helping out with ground counts and monitoring duck behaviors on control wetlands at various times during the survey, Ryckman said. Despite the pandemic’s impact on the research, the graduate student said he’s not worried about his field season. He has access to a camper he might set up at the DU ranch or a nearby campground if necessary.

“It’s going to be interesting to see how everything plays out,” he said.

Learning to operate the drones hasn’t been too difficult, Ryckman said; the challenge is collecting as much data as efficiently as possible because the drones only have about 25 minutes of flight before the batteries need recharging.

“Actually flying the drones is fairly simple, especially if you have a little bit of a background in gaming, like playing PlayStation,” he said, “because it’s all kind of dealing with your hand-eye coordination and going from there.”

The two ranches are fertile ground for waterfowl research, with their abundance of grassland and wetland habitat, Ryckman says.

“It’s really beautiful, too, with all the spring flowers blooming and all the wetlands and all the birds — not just ducks, but shorebirds, as well,” Ryckman said. “Just a nice big coteau and lots of wetlands.”