AG Survey recently used control targets, GNSS receivers and UAS technology in a race against the tides and weather to survey 80 different beaches along England’s southwest coast. The project was part of a national coastal monitoring program funded by England’s Department of Environment, Food and Rural Affairs and run through the Environment Agency (EA) to collect topographic beach surveys around the country.

The goal was to survey five to seven beaches within the tidal window, which was up to seven days, explains Andreas Garbe, AG Survey’s managing director.

“Often we only had one hour in which to collect a significant amount of data––a point every 5 centimeters at a height accuracy of 3 cm––before the tide chased us away. And we needed robust, photogrammetric software to process and deliver the measurements within two weeks of each beach surveyed. It was a full-on, relentless cycle of time crunches, surveying, processing and delivering data.”

Adding to the stress of the project was AG Survey’s decision to use a UAS––an unproven technology for beach surveys––to measure a large percentage of those beaches.

“Historically, all of the topographic beach surveys for the program were done with GPS technology to measure points every 5 meters,” says Garbe. “We thought many of the designated beaches could be surveyed more efficiently and more comprehensively with the speed and data depth of a UAS. Together with specialized UAS processing software, we wanted to prove that a UAS-based approach could be a better solution for a number of challenging beaches.”

It was a good bet.

By purchasing a UAS, AG Surveys became the first firm in England to officially use a UAS to survey beaches and confirm the viability of the technology for coastal monitoring. And, by pairing the aerial technology with an intelligent and rapid data-processing software, the new solution gave them the results and expertise to open up new business opportunities.

Scheduled in five-year phases, the NNRCMP uses a range of data-gathering sources such as aerial photography, lidar, GNSS and wave buoys to develop beach and bathymetric profiles––metrics that can help determine the risks of coastal flooding and erosion and help coastal managers make sustainable shoreline management decisions. After implementing the first 5-year phase of the NNRCMP in 2011, the EA issued tenders in 2016 for all six regions for the 2017-2021 campaign. One requirement of the tenders was for comprehensive, baseline topographic beach surveys based on a 5-m grid and a data height accuracy of 3 cm.

“During the first monitoring program, we did all the beach surveys with GPS, which was quite labor intensive,” says Garbe. “In the southwest we have massive beaches, many of which are littered with cobbles and boulders so walking them with GPS is challenging and requires a lot of manpower. In the north of the region we also have beaches in the Severn Tidal Range––the second highest tidal range in the world––with a tidal range of up to 15 meters so timing is critical. Based on our previous experience, we believed a UAS-based system could provide the same height model as GPS but would enable us to cover larger areas faster and produce better data detail.”

Having successfully surveyed a number of beaches in North Cornwall for the debut monitoring program, AG Surveys was awarded three of the four designated regions in the Program’s southwest region.

The project area stretched from St Austell on the south coast, around the farthest, southwestern point at Land’s End, and up the coast to the small village of Aust, 16 km north of Bristol––a footprint of about 200 km. Within those boundaries were 80 beaches of varying sizes, shapes and topography. Each required one baseline survey––a full boundary coverage from one side to the other and from the back of the beach to the lowest waterline at Mean Low Water (MLWS) tide––and a series of profile line surveys. The profile surveys follow pre-defined lines set every 50 m from the back of the beach to the MLWS line and GNSS measurements are taken within 10 cm of each side of the line.

All beaches had to be surveyed during spring tide, an unusually high tide when a new moon or a full moon causes the greatest rise and fall in tidal level. As the spring tides only occur twice each lunar month, AG Surveys had to develop a tight survey and data-delivery schedule.

“As a complement to our GNSS-based beach surveys, we needed a UAS that could handle the varied coastal landscapes, the stringent data-accuracy specifications, and the notoriously windy conditions along the southwest coast,” says Garbe. “Equally important was having a software solution that could readily handle the volume, spectral richness and spatial density of the UAS imagery. It needed to be fast and incredibly accurate.” 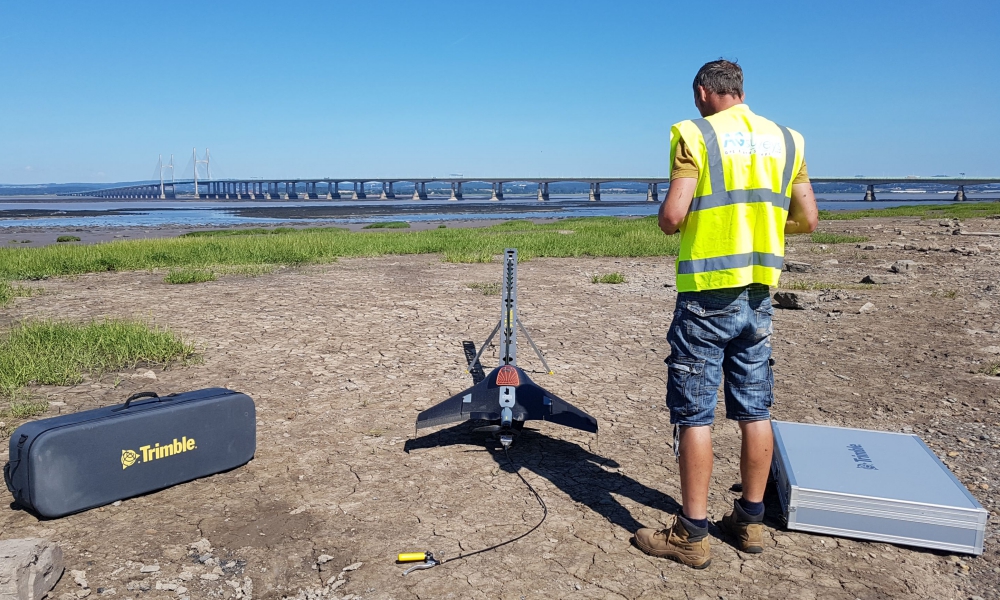 To devise a survey plan, the company first consulted Google Earth to study each of the targeted beaches. They identified 22 beaches that would be too laborious to survey with GNSS or would pose health and safety risks to crews, some of which included Westward Ho, Saunton Sands, and Minehead.

Garbe and his crew of three or four could usually cover 3 square kilometers a day, flying four to five UX5 flights at an altitude between 100-120 m, speeds of 80 kph and a lateral overlap of 80 percent. To ensure the reliability and accuracy of the UAS data, they also used a minimum of ten ground control points (GCPs) for each flight block and measured each target’s position with a GNSS receiver.

“Sometimes we needed more than ten GCPs, especially if we had a monotone, sandy beach without much distinction or a really rocky one that had sharp variations in the topography. With this methodology, we consistently achieved an accuracy between 2.7 and 3 centimeters.”

“Trying to survey the shoreline means you’re constantly clambering up half a meter on seaweed covered rocks and then sliding down the other side,” says Garbe. “Doing that with GPS is not fun. Thankfully the UAS reduced most of the hassle.”

Widemouth Bay and Black Rock sit adjacent to each other, so AG Survey’s crew surveyed both simultaneously.

Starting early morning for low tide, they first located suitable positions for the 50 GCPs they would need for the 2.5 km x 1 km area of interest (AOI). To work around the rock-laden shorelines they found flat spots on rocks and used biodegradable paint to mark them.

Considering the beach size, topography and wind direction, Garbe used Trimble’s Aerial Imaging Flight Planning software to establish three flight paths, one at the back of the beach, one at the waterline and one in the middle. Once the GCP locations were recorded with GNSS, Garbe flew the first, 30-minute aerial survey along the back of the beach at an altitude of 120 m. As soon as the UAS landed, the ground crew laid GCPs for the next flight over the low-water shoreline, and then repeated the process a third time for the last flight over the middle block. After a six-hour day, they collected a total of 1,745 images over the whole AOI at a ground sample distance (GSD) of 1.65 cm.

“We had less than one hour to collect the data within the lowest tide window––later than that and the crew would have had to wade into knee- or hip-deep water to try to find the control points ,” says Garbe. “The significant advantages of having the UAS for this are its efficiency, stability and consistent accuracy With traditional GNSS, we would have had to climb over endless rocks and the points would have been all over the place. It would have taken much longer, risked our safety and been impossible to achieve the same results.”

The imagery was downloaded into their integrated Trimble Business Center (TBC) and UASMaster processing chain––the workhorse of the system and the engine that created the data products needed to prove the viability of the UAS approach.

Sand in their hair

Garbe and his team first imported into TBC the flight and GNSS data and the base station data from the combined Widemouth Bay and Black Rock survey. Using both the UX5’s on-board GNSS positioning data and the ground control data, they processed precise, short baselines between the base station and each photo point––the shorter the baseline, the higher the accuracy. After ensuring the sharpness and brightness of each image, all 1,745 images were integrated into UASMaster to create a dense point cloud and a seamless orthophoto of the entire AOI.

“One of the reasons we use UASMaster is for its photogrammetry power,” says Garbe. “It’s incredibly good at automatic aerial triangulation and tie-point matching for point cloud creation and subsequent orthophotos. The matching capabilities are particularly important for beaches which are often homogenous and low-textured. And having the ability to seamlessly move between TBC and UASMaster makes the workflow much more efficient.”

Because the imagery was pre-processed in TBC, UASMaster already has a foundational geographic reference for the location of each photo in relation to its neighbors. To produce the point cloud, the program uses the coordinates from the ground control and each photo center to calculate the interior orientation––the relationship between the image plane and the projection center of the UAS’ camera––and the exterior orientation––the relationship between the ground and the image. It then analyzes image pixels and looks for pixels with the same or similar gray-scale values in neighboring images. When the software finds matches, it uses triangulation to calculate the 3D coordinate of those points, an artificial intelligence process that results in dense 3D height models. The program also automatically color codes each of the points to indicate what they are––sand, boulders, rocks.

UASMaster has the unique ability to produce seamless, georeferenced orthophotos directly from the point cloud. The program uses the height model of the point cloud, adjusts the 3D point sizes to fit the ortho pixel size, and stretches the images over the 3D model to ortho-rectify it. The entire project is then integrated back into TBC for final editing. This streamlined method is easier and requires much less processing, helping the AG Surveys team meet the tight delivery deadlines.

UASMaster produces both a 3-cm point cloud and orthophoto of Widemouth Bay and Black Rock in two days, a process that would have taken over a week to complete with manual photogrammetric techniques. And, Garbe says, the UAS provides significantly more visual information than a traditional aerial photo or GNSS survey.

“The results from Black Rock are absolutely amazing,” says Garbe. “We produced a color-coded, 5-cm grid point cloud in which you can zoom around and view the entire beach, including cliff faces and edges, from different angles. It’s a ridiculous amount of 3D data and I don’t think you could get that kind of detail and visualization any other way.”

For each of the 22 UAS-derived beach surveys, AG Surveys delivered the point cloud, orthophoto, profile line survey and a detailed comparison document that lists the measurement accuracy of the UX5 points and the nearest GNSS survey point to validate the precision of the UAS technology.

The baseline surveys are only performed once every five years, so AG Surveys will need to wait to see if their UAS approach will be adopted for the next campaign. But their success has already led to other topographic beach surveys and Natural England has expressed interest in testing the UAS system for vegetation and habitat mapping along the coast.