Everdrone announced it is now deploying a drone system that delivers Automated External Defibrillators (AEDs) to the scene of cardiac arrests. In doing so, bystanders will now have the ability to initiate life-saving measures while awaiting professional medical care.

Out-of-hospital cardiac arrests affect some 275,000 individuals in Europe each year and carry a low survival rate of about 10%. Research suggests when CPR and early defibrillation is initiated within the first few minutes the survival rate could potentially increase to as much as 70%.

Now available to more than 80,000 residents in the Gothenburg area of Sweden, the service is part of a clinical study in collaboration with Sweden’s national emergency call centre, SOS Alarm, and the Centre for Resuscitation Science at Karolinska Institutet (KI).

“By combining our state-of-the-art drone platform and know-how in the regulatory space, we are finally able to launch this life-saving application,” says Mats Sällström, CEO of Everdrone. “The collaboration with SOS Alarm and KI has been absolutely crucial for the realization of the concept in terms of being able to perform a swift alarm response, and to manage the medical and ethical issues involved.”

CRITICAL CARE IN MINUTES
The initial study will launch in June and run through the end of September 2020. Three drone systems will be placed in designated locations, ready to respond to emergency 112-calls immediately for emergencies occurring within a radius of 6 km.

“In the event of a cardiac arrest, the drone is dispatched at the same time as the ambulance and will certainly be the first to arrive on the scene. Our operators are ready to instruct bystanders on how to initiate the life-saving device,” says Mattias Regnell, Head of Innovation and Research at SOS Alarm.

When the drone arrives at the designated location, the AED is lowered to the ground while the drone remains hovering at 30 metres altitude. This procedure eliminates several risks associated with landing a drone close to people.

“The method of lowering the defibrillator from the drone with the help of a winch is something we have been developing and testing for a long time,” says Sällström. “We have performed countless test deliveries in recent months, and the results show that the method works very well.” 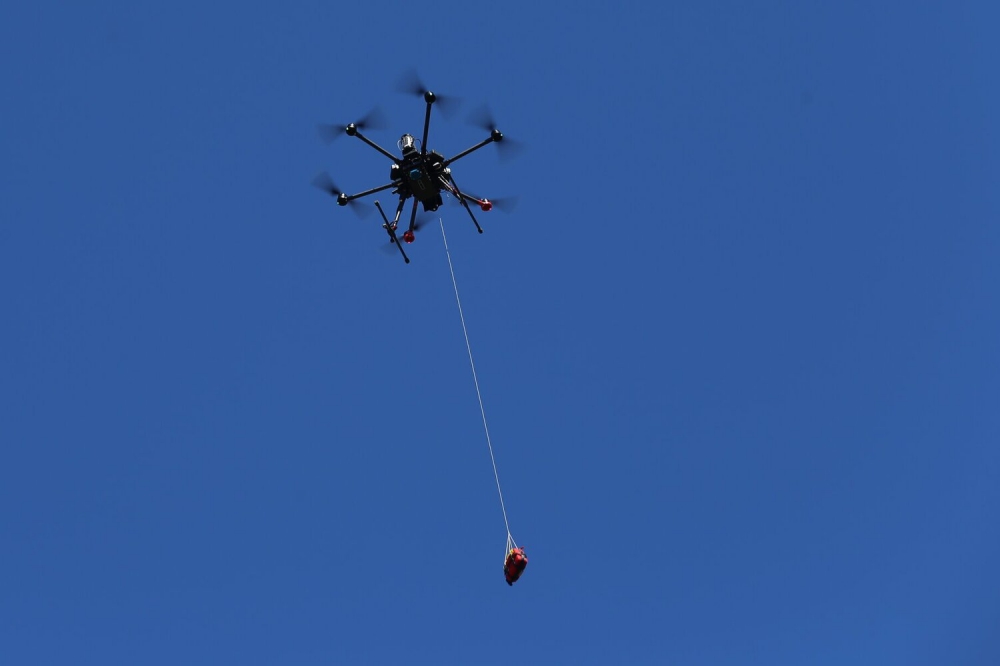 SAFETY AND REGULATIONS
Everdrone is one of just a few companies in the world to be granted permission for urban drone operations thanks to the company’s safety portfolio and a long-standing dialogue with authorities.

“Safety is at the core of everything we do at Everdrone. Even though the drones we use are extremely safe in themselves, we still need to foresee every conceivable fault scenario and put solutions in place to handle them. The system must contain a great many functions that overlap and complement each other, to ensure that no single point of failure can lead to an accident,” says Sällström.

Everdrone’s flight system features industry-leading obstacle avoidance functionality built on Intel® RealSense technology, intelligent route planning to significantly reduce flight time over people, and a certified onboard parachute system to mitigate risk to people on the ground in the case of a bird strike or critical propulsion failure.

THE RESEARCH PERSPECTIVE
The outcome of the emergency operations will continuously be evaluated within a research study conducted by KI.

“We see enormous potential for this type of fully-integrated drone system. This study is unique, the first of its kind in the world, and we look forward to objectively evaluating the project together with Everdrone and SOS Alarm,” says Andreas Claesson, Associate Professor at KI.

The results of the study will be presented by KI later this year, with the hope of expanding operations to other parts of Sweden and Europe by 2021.