Scientists have used the principles that guide a mosquito’s nocturnal flight to develop a quadcopter equipped with an elegant collision-avoidance sensory system. Their research, published in Science, demonstrates how the mosquito avoids obstacles in the dark by sensing changes in the airflows generated by its flapping wings.

The international collaborative research group, which includes Dr Simon Walker from the University of Leeds and was led by Professor Richard Bomphrey at the Royal Veterinary College (RVC), used the understanding of the sensory mechanism in the male Culex quinquefasciatus mosquito to develop a bio-inspired collision avoidance system for an autonomous quadcopter – which encodes aerodynamic information on the fly.

The research also featured collaboration with Toshiyuki Nakata from Chiba University, Patrício Simões and Ian Russell from the University of Brighton.

Nocturnal mosquitoes navigate in the dark without crashing into surfaces. When they land on humans or other animals to feed, they do it very gently in order to remain stealthy; being noticed could spell disaster. Since these nocturnal mosquitoes cannot see what they are doing with their eyes, they use a different sensory mode – mechanosensing.

Mosquitoes, and other flying animals, fly by accelerating the air around them, creating fast jets beneath each flapping wing. These jets change shape in the presence of obstacles such as the ground or walls.

Thanks to an exquisitely sensitive array of receptors at the base of the antennae on mosquitoes’ heads, called the Johnston’s organ, the mosquito is capable of detecting these changes in airflow patterns. The researchers called this “aerodynamic imaging”: it gives the mosquito a picture of the world around them even in the dark and when they cannot feel surfaces by physical contact. 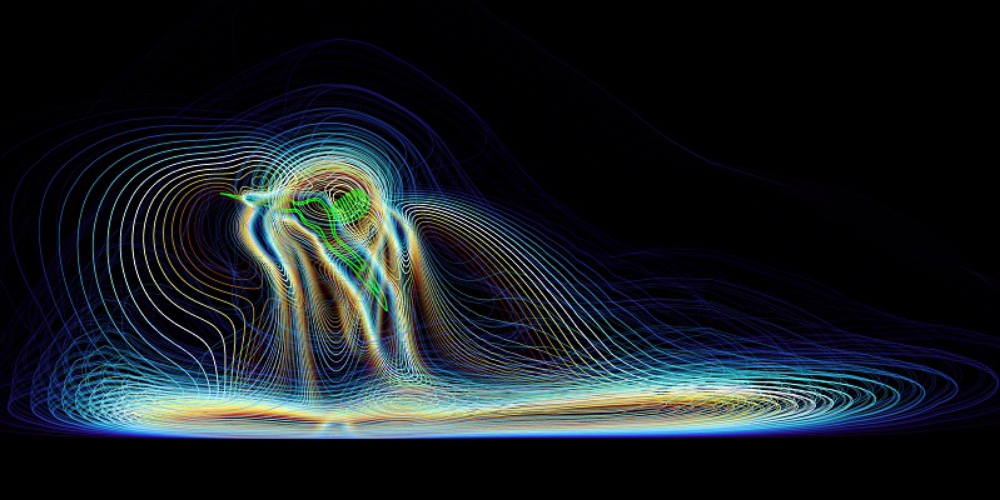 The team used computational fluid dynamics simulations, based on high-speed recordings of mosquito flight, to investigate the effects of the ground and walls on airflows around the body. They discovered a trend: the Johnston’s organs on the antennae detect airflow changes very easily at low altitude, with the response diminishing at higher altitudes, until the threshold for detection is not met.

They were surprised to see that one of the locations with the largest differences in airflow patterns occurs above the head, which means that the insects’ antennae were optimally positioned to sense these changes despite being farthest away from the ground.

Aerodynamic simulation of a hovering mosquito showing its wake touching the ground. Highly sensitive organs at the base of the antennae monitor the flow and can detect this event even at some distance from the surface. (Credit: Chiba University; Structure and Motion Laboratory, RVC)

Aeroplane and helicopter pilots will be familiar with a phenomenon called ‘ground effect’ which tends to come into play when very close to the ground, usually noticeable at an altitude lower than two wing lengths.

Using their new data, the researchers predicted the maximum distance at which the Culex mosquito can detect surfaces: more than 20 wing lengths, which is far larger than the expected distance for detection based on existing aerodynamic models.

Dr Simon Walker, from the School of Biomedical Sciences at Leeds, said:

“Mosquitoes represent an outlier within insects with their elongated wings and extremely high flapping frequency. We already know that they use unconventional aerodynamics during flight and this research provides another piece to the puzzle of their evolution as well as inspiring technology for use by engineers.”

Lead author Dr Toshiyuki Nakata was funded by the Biotechnology and Biological Sciences Research Council (BBSRC) to investigate the aerodynamics of mosquitoes and other insects. He said:

“With our simulation results, I was simply amazed by the precision of mosquitoes to avoid surfaces around them. If we look at the ground effect in the context of conventional aerodynamics, the distance to the floor detected by the flying mosquito is enormous.”

The team’s next step was to transfer the concept of aerodynamic imaging to a miniature quadcopter. They fitted the vehicle with a bio-inspired sensor device made from an array of probe tubes connected to differential pressure sensors.

By measuring the airflow velocities around the quadcopter, the researchers identified where to place the probes for maximum sensitivity. The sensor modules perform optimally, as on the mosquito, when placed in areas experiencing the greatest changes in airflow when approaching surfaces. The device was flown near the ground and walls first tethered, then piloted, and, finally, autonomously.

This simple model was able to detect surfaces and raise the alarm successfully at distances sufficient to avoid obstacles when approaching the ground and walls. Unlike previous surface-sensing quadcopter studies, this model requires only basic thresholds with little to no processing to function. It is lightweight, power-efficient, and scalable.

“It’s important to understand how such a significant group of insects navigate around the world. If we are to live in a future where ever more work is done by flying vehicles and drones, it could be useful to take some inspiration from mosquitoes to make our machines safer when operating close to buildings or other infrastructure.”

There is no reason to stop at small fliers, this surface detection capability could be scaled-up to helicopters, making them a little safer when flying in treacherous, low-visibility conditions.”

The full paper, titled Aerodynamic imaging by mosquitoes inspires a surface detector for autonomous flying vehicles, is published in Science.

The project was supported by the BBSRC, Defence Science and Technology Laboratory (Dstl), the Royal Society, and the University of Brighton.

For any additional information please contact the University of Leeds press office at pressoffice@leeds.ac.uk