Additionally, the team achieved the innovation award. Following up on the success, Phoenix-Wings is already working with partners on medical and disaster relief applications including remote island supply in crisis as the Covid-19 pandemic.

“As the only company qualified to participate in two competitions and operating the largest drone, we are especially proud to having achieved these perfect results. “

The LKC competitions were held as part of the African Drone Forum, an international conference on the use of drones in civil applications on the African continent. Using the venue, technology and vision of Phoenix-Wings were presented to a broad audience including His Excellency Paul Kagame, the president of Rwanda.

Introduction to the President of Rwanda

The LKC tasks required to take-off at a drone port at the shore of lake Kivu, fly to an island about 20km out and deliver or pickup medical supplies. Since no runways are present at the sites, the drones must be able to take-off and land vertically like a helicopter. From early 2019 on, companies had to present their technical approach, safety concept and market strategy. Starting at over 70 applications in the first phase, 10 companies were finally invited to Rwanda.

Upon selection, Phoenix-Wings prepared its “Manta Ray” system, a fully electric heavy lift and high-volume cargo drone. Its specially designed shape allows for an efficient transport of a modular 30-liter cargo box containing up to 10kg of cargo. Delivery range is up to 120km.

At the drone port in Rwanda, the first task was to demonstrate safe operations of the drone over the lake, well beyond visual line of sight (BVLOS). Intensive scrutineering was conducted by independent experts to verify safety, owing to the novelty of such applications worldwide. Being well prepared, Phoenix-Wings was granted approval to perform BVLOS operations as the first team. 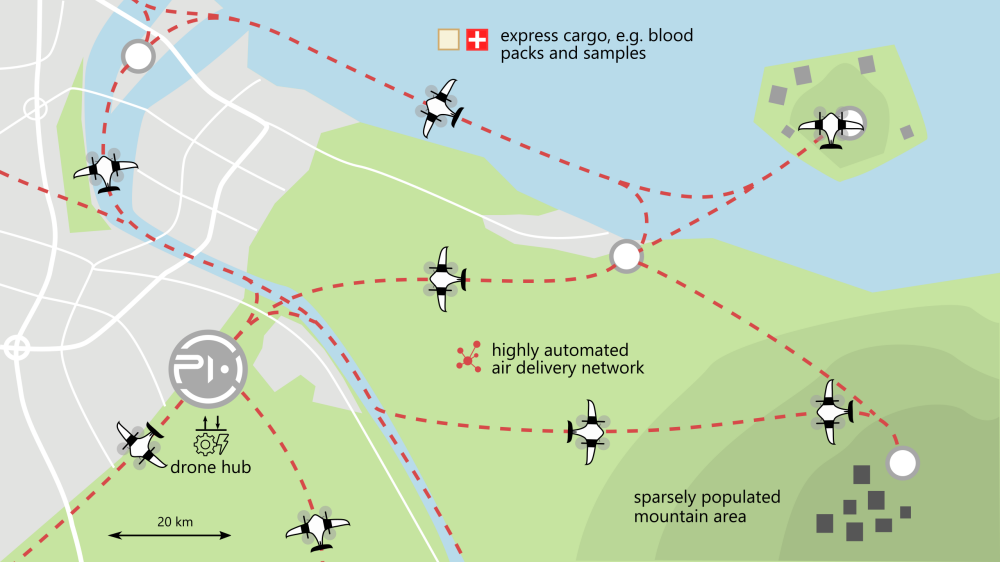 In the competition flights, the “Manta Ray” showed its strengths in cargo capacity and volume by delivering and picking up the highest payload of all teams. Additionally, the technical features of the system, the only one of the competitors solely programmed by the company itself, impressed the judges with flawless automatic missions and ease of use.

“Our technology showed perfect performance and will be optimized for more use cases now” comments Philipp Niermeyer, lead of Flight control. Even when a sudden rain shower occurred at the drone port, the aircraft safely landed.

The winning of the competition confirms the feedback given locally that the performance of Phoenix-Wings stood out, and that the system is well suited to perform critical cargo missions. Using the boost of the competition results, the company is already working on advancing its systems and discussing applications worldwide with a variety of partners. The current situation of the Covid-19 pandemic already led to a follow up on the LKC competitions when being asked to provide a method to supply remote German Islands which suffer a reduction in ferry schedules.

[Other winners include Wingcopter and LEAPR Labs – Ed.]