The organizing committee of the Lake Kivu Challenge on May 5 announced the Flying Competition’s winners and named Wingcopter the winner of the Emergency Delivery category. Wingcopter also received a special award for its safety procedures. As a winner, the company receives a prize money of GBP 65,000.

The Flying Competition was part of the 2020 African Drone Forum which took place in Rwanda in February, a first of its kind on the continent. Hosted by the Rwandan Government and inaugurated by President Kagame, the Forum aimed at showcasing the advances in autonomous drone delivery that can make a significant difference for isolated communities and rural areas across Africa.

The Challenge received 92 applications from 35 countries but in the end only the top ten drone companies were invited to put their drones and operators to the test through real-life scenarios at Lake Kivu in Western Rwanda.

Throughout the three weeks of flights, Wingcopter was able to impress a panel of judges with a perfect mission performance. It included a fully automated delivery of an emergency package from a droneport on the mainland to Bugarura Island and a secure return landing. The roundtrip, beyond visual line of sight flight was 40 kilometers and was completed without a battery swap. Wingcopter drones were able to complete the one-way route to the island within 12 minutes, a drastic reduction compared to over 50 minutes by boat. The package drop-off required no landing or human interaction, an attribute to Wingcopter’s innovative winch mechanism. 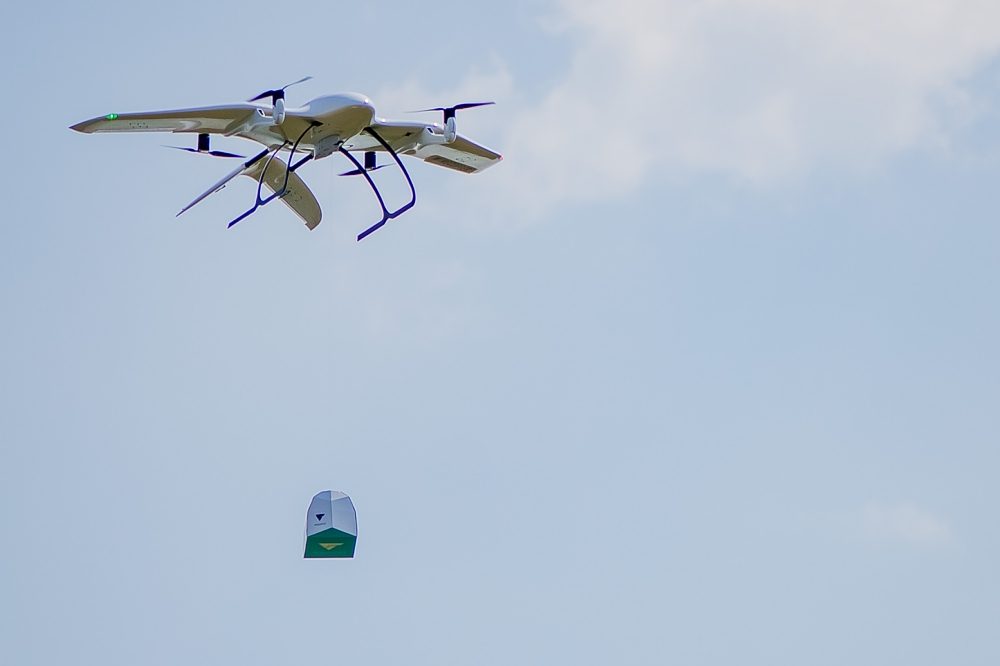 Wingcopter had already successfully deployed a similar type of on-demand vaccine delivery to 19 remote villages in Vanuatu on behalf of the local Ministry of Health and supported by UNICEF.

“We are very proud to be winners of the Lake Kivu Challenge, as this challenge and the African Drone Forum embody the innovative spirit of humanitarian aid and the African drone community as well as the great potential for sustainable drone deployments. We strongly believe that Wingcopter drones can leapfrog existing infrastructure by delivering significant social and economic value in Africa and beyond,” comments Tom Plümmer, CEO and Co-founder of Wingcopter.

“Wingcopter’s goal is to develop long-term partnerships with local governments, private sector and donor organizations throughout Africa,” adds Selina Herzog, project manager at Wingcopter. “It is through these partnerships that we will accomplish the knowledge-sharing and training of the local workforce, ultimately empowering local stakeholders to take over and scale operations. We want our technology to give back to the communities where we operate and create new perspectives.”

The African Drone Forum created a unique platform to tell the Wingcopter story and exhibit its technology to 1,000+ key players within the international drone and humanitarian ecosystem, allowing immense networking opportunities with the potential for future partnerships and business deals. An initial memorandum of understanding with a Rwandan startup has already been signed; others will likely follow.

About the African Drone Forum and the Lake Kivu Challenge

The African Drone Forum, a Drone Symposium, Expo & Challenge (ADF), followed on from 2018’s Lake Victoria Challenge as an exhibition of state-of-the-art technologies and services for unmanned aerial delivery in Africa. The #ADF2020 was held in Rwanda in February 2020. Hosted by the Government of Rwanda, with support from the World Bank and other partners, the African Drone Forum is intended to serve as a showcase for the advances in autonomous drone delivery that can make a significant difference for isolated communities and rural areas.