Using delivery drones in cities consumes up to ten times more energy than electric vans because they can only carry one parcel at a time and require frequent back and forth trips, a new study finds.

Dr. Thomas Kirschstein, an economist at the department of Production and Logistics at Martin Luther University in Halle-Wittenberg, Germany, developed a simulation to compare how energy efficient different delivery methods would be in a large and crowded city.

He has calculated whether current drone models are ready to compete with vans in terms of energy consumption.

“When evaluating the hypothetical use of delivery drones, attention has frequently only been on whether drones could deliver parcels faster and cheaper. Sustainability aspects, on the other hand, played less of a role,” explains the economist.

In his new study, Kirschstein compared the energy consumption of drones with that of the diesel-powered delivery vans and electric transport vehicles currently used by parcel carriers. In a simulation, he hoped to discover which vehicle had, under which circumstances, the best energy balance. Basing his calculations on the greater Berlin area, he played through several scenarios.

“Among other things, we investigated how the number of parcels per stop and the traffic situation impacted energy consumption,” the researcher explains.

He expanded his calculations to include the emissions produced through the generation of electricity or the consumption of diesel.

Energy consumption of DVs and EVs

Initially, a trend became evident across all scenarios: electric vans were significantly more economical than diesel vans, consuming up to 50 per cent less energy.

“This is not surprising for an urban setting: In cities, vans have to drive slowly and stop and start a lot. Here, electric vehicles consume significantly less energy,” says Kirschstein.

These factors are not relevant, of course, for drones. Instead, wind conditions play a crucial role in how they perform. If there is a crosswind, for example, more energy must be expended to keep the drone on course. On the other hand, headwinds or tailwinds can even have a slightly positive effect on energy consumption.

“Drones consume a relatively large amount of energy when they have to hover in one place in the air, for example when they want to deliver a parcel and have to wait outside the door of the recipient’s home,” explains the economist. 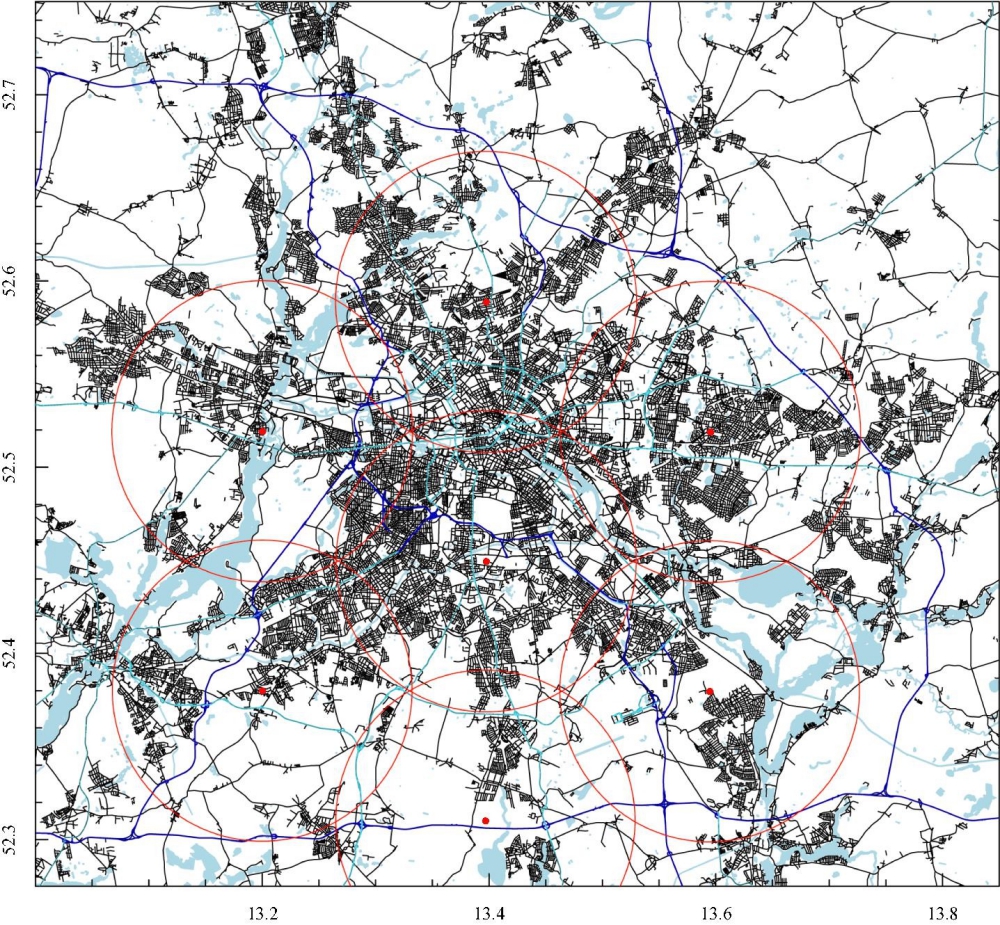 Map of the street network and potential UAV depots in Berlin

On average, the drones in the simulation consumed up to ten times more energy than electric delivery vans in such a densely populated city like Berlin.

“Parcel carriers, for example, can stop and deliver several parcels on foot if multiple customers are receiving deliveries in one street. This is not possible for drones, as they can only deliver one package at a time. This increases their energy consumption, sometimes drastically,” says Kirschstein. But his simulations also reveal a scenario in which the flying couriers are more energy-efficient than delivery vans: in more rural areas that are sparsely populated. However, higher energy consumption does not necessarily mean a poorer environmental balance: “Even if drones require more energy, they could represent an alternative to diesel vehicles, provided the electricity they need is generated by environmentally friendly means,” explains the researcher.

The full study can be accessed here: