Animal Dynamics, a technology start-up applying lessons from wildlife to drone design, was formed in 2015 to pursue the science known as biomechanics. The company already has two drones to show for an intimate study of bird and insect life.

One takes inspiration from a dragonfly, and has attracted funding from the military. Its four wings make it steady in high winds that would defeat existing miniature spy drones.

Known as Skeeter, the secretive project has cracked the challenge of using flapping wings to power a drone. While wings are more efficient than a propeller and allow a dragonfly to hover in the face of strong gusts they are almost impossible for human engineers to emulate.

“Making devices with flapping wings is very, very hard” says CEO Alex Caccia. Helicopters manoeuvre by changing the pitch of rotor blades to go forward and backward or to hover. For smaller objects hovering is a major challenge.

“A dragonfly is an awesome flyer” says Caccia, “It’s just insane how beautiful they are, nothing is left to chance in that design. It has very sophisticated flight control.” 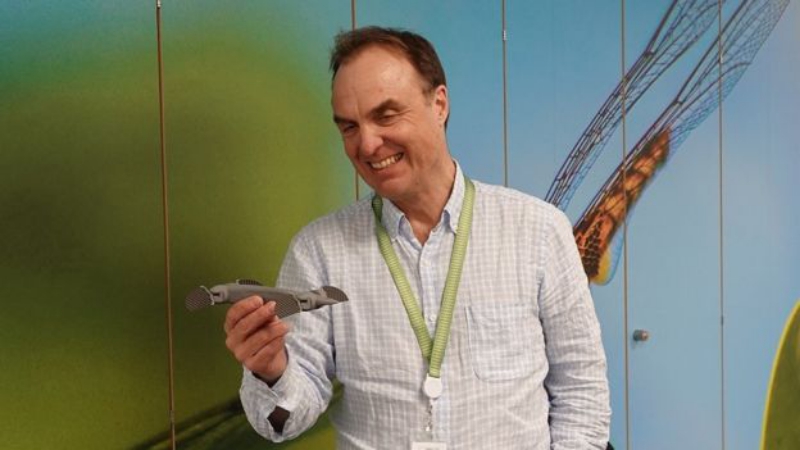 Alex Caccia with a prototype of the Skeeter

The dragonfly does have 300 million years of evolution on its side. Animal Dynamics has spent four years writing software that operates the hand-launched drone like an insect and allows it to hover in gusts of more than 20 knots (23 mph or 37 km/h). From 22 to 27 knots is classed as a “strong breeze”.

That software gives Skeeter a degree of autonomy and guides it around obstacles towards its objective.

And it meets a Ministry of Defence desire for a wind tolerant miniature reconnaissance drone to let soldiers spy on threats concealed ahead.

Skeeter will carry a camera and communications links into the skies and should be cheap enough for operators to lose some without denting the defence budget.

It is currently around eight inches long, but production versions are planned to be smaller. Squeezing a lot of aerodynamic and navigational wisdom into a diminutive package is nature’s prerogative but was a big challenge for Animal Dynamics. “We started small to learn hard lessons” as Alex Caccia puts it.

Animal Dynamics’s 70-strong team relied on electronics from the smartphone industry to shrink their knowledge into Skeeter’s frame. Insights into robotics, biology and software all play their part in the design but mobile phones have been a boon to all mini-drone makers.