NASA and its industry partners are taking unmanned aircraft systems closer to operating in harmony with other aircraft in the national airspace.

The technology and procedures developed during a nearly decade-long program has been assisting the Federal Aviation Administration (FAA), develop the rules for certification of unmanned aircraft to safely coexist with other air traffic. The goal is to enable new commercial and public service opportunities, such as real-time surveillance of fires, infrastructure inspections for pipelines and medical transportation in the future.

NASA began its Unmanned Aircraft Systems (UAS) Integration in the National Airspace System (NAS) Project in 2011. Work since then has included multiple simulation efforts and six specific flight tests series that focused on validating these simulations and supporting the development of minimum operational performance standards (MOPS) for Detect and Avoid (DAA) systems.

Flight Test Series One (FT1) kicked off the series with the unmanned Ikhana aircraft at NASA’s Armstrong Flight Research Center (AFRC) in California. The early flights were completed to help the UAS-NAS project team develop foundational technologies for future flight series. FT1 involved the installation of the automatic dependent surveillance broadcast system, also known as ADS-B on the Ikhana, and launched the development of the Live Virtual Constructive Distributed Environment (LVC-DE).

The LVC-DE can sync NASA’s research centers to create a real-life simulated airspace integrating manned and unmanned aircraft to test concepts, technologies and procedures in the same airspace. LVC-DE is a capability developed by the Integrated Test and Evaluation (IT&E) subproject of UAS-NAS that interfaces live flights at AFRC with simulated airspace and traffic at NASA’s Ames Research Center in California.

The IT&E team worked from FT1 through Flight Test Series Four (FT4) on maturing the LVC-DE capability. The data collected during these flight tests and associated simulations helped the FAA, through the RTCA Special Committee DAA Working Group, inform the development of the Phase One DAA Systems and Airborne Radar MOPS.

As the team entered Phase Two of their operations, a major milestone occurred when the Ikhana became the first remotely piloted aircraft to fly through class E airspace without a safety chase aircraft. The team was able to receive the first No Chase Certificate of Waiver or Authorization (COA) for NASA from the FAA to accomplish this demonstration flight. The Ikhana was able to demonstrate that a UAS with an onboard DAA system could safely detect and avoid other aircraft. As a result, Aviation Week and Space Technology selected the team as the recipient of the 62nd Annual Laureate Awards, in the category of Commercial Aviation, Unmanned Systems.

Phase Two of the UAS-NAS Project shifted focus to a smaller sized unmanned aircraft. In particular a Group 3 UAS that will fly under 18,000 feet and weigh more than 55 pounds.

FT6 was focused on informing revisions to the DAA related MOPS addressing Group 3 UAS and expanded operations in the NAS.

The NAVMAR Applied Sciences Corporation TigerShark, flew over Edwards Air Force Base on July 9, 2019 during a systems checkout flight for Flight Test Six

The TigerShark performed scripted encounters and full mission flights at Armstrong. The scripted encounters involved an “intruder,” manned aircraft, flying pre-planned paths in the vicinity of the TigerShark to trigger the DAA alerting and guidance. All encounters maintained a safety buffer, a vertical clearance, to ensure test effectiveness of the DAA alerting and guidance system, while maintaining a safe operation.

The full mission flights involved interfacing via the Armstrong and Ames LVC-DE to integrate the live aircraft flying at Armstrong, into the simulated Oakland airspace. The team was able to gather pilot performance data using  specific DAA system constraints. “Subject pilots,” expert UAS pilots were not aware of the details of the simulation, flew the full mission encounters against real and simulated traffic. The project selected seven subject pilots from active duty Air Force UAS squadrons. Two project researchers sat with the pilots to oversee the data collection during the flight. The researchers highly anticipated these full mission flights as they gathered data to compliment previously gathered human in the loop simulation data.

The LVC-DE created virtual traffic as the TigerShark flew with a manned intruder entering its flight path. The system was also used as a central hub collecting data and translating messages from the DAA and Command and Control systems during flight. 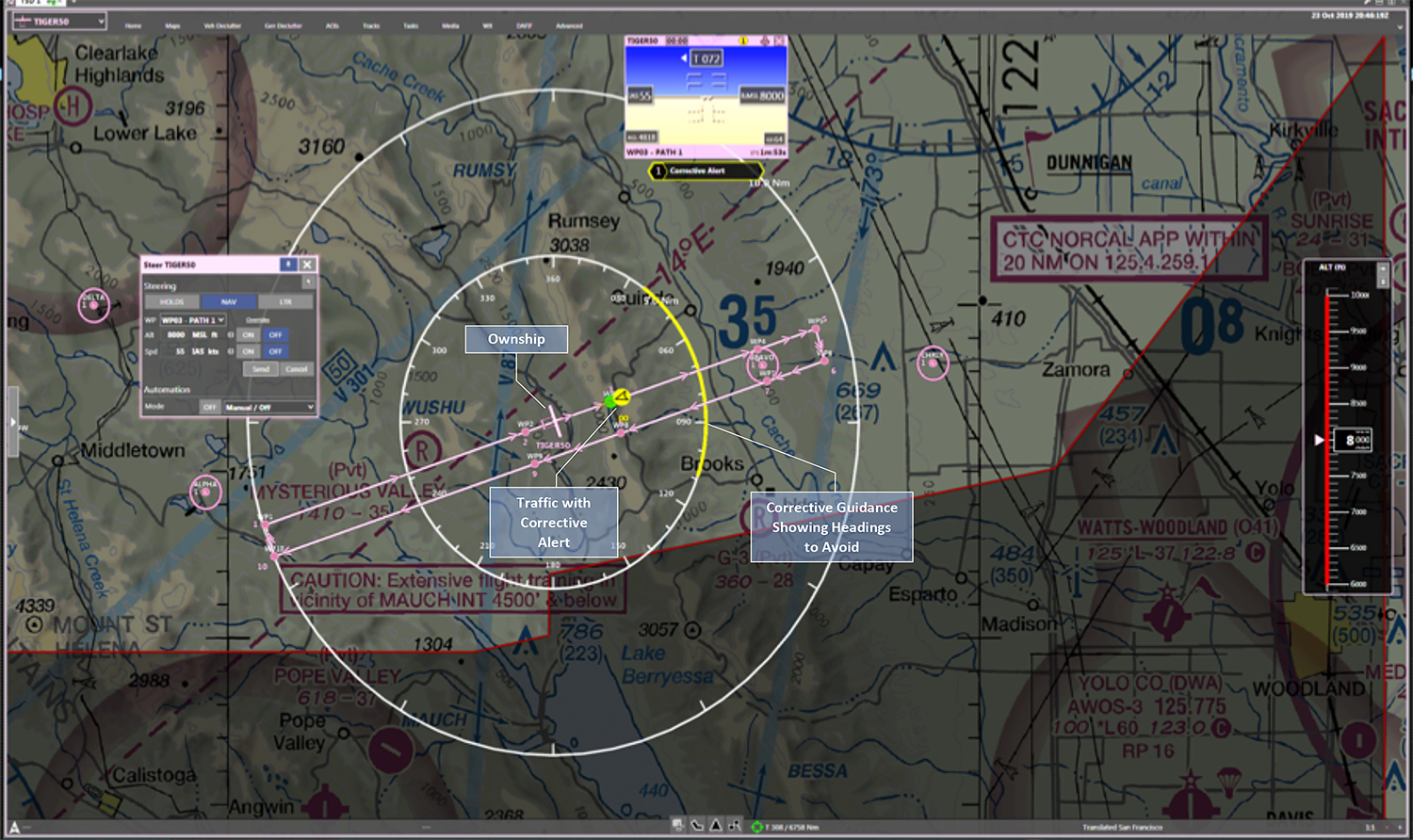 An image of the Vigilant Spirit Control Station display used during a flight for the Flight Test Series Six project. The image is demonstrating an encounter flown by with the Navmar Applied Sciences Corporation’s unmanned TigerShark aircraft. The TigerShark is displayed on the center of the screen in light pink, and the yellow arrow represents an intruder aircraft during a flight at NASA’s Armstrong Flight Research Center

The subject pilots relied on the DAA logic running on the UAS to avoid live and virtual traffic. Among other things, the full mission flights provided the team with data on pilot reaction time and workload, and system acceptability.

FT6 had its final flight in November, but the team will continue to work this year on data analysis, results documentation and providing inputs for DAA related MOPS updates.