While it’s important to get fresh seafood from fishing boats to restaurants as fast as possible, using a full-size crewed aircraft to do so isn’t always cost-effective. That’s why Yamaha and Japan Airlines are now looking at using a drone for part of the journey.

Members of the two companies conducted a field test in February, in Japan’s Goto Islands – they’re located about 1,000 km (621 miles) west of Tokyo, forming an archipelago in Nagasaki Prefecture.

The test began at Kamigoto Airport on Nakadori Island, where 20 kg (44 lb) of freshly-caught fish such as longtooth grouper was packed into an insulated box, which was then slung beneath a Yamaha Fazer R G2 unmanned helicopter. That aircraft proceeded to take off and fly approximately 35 km (22 miles) to the city of Saikai on the island of Kyushu. There, the box was removed from the drone and loaded onto a commercial Japan Airlines flight, reaching a restaurant in Tokyo on the same day.

The copter flew at an altitude of 100 meters (328 ft), completing the Nakadori-to-Kyushu flight in about 40 minutes – by contrast, making the same trip by car and ferry would reportedly take almost three hours.

Ground crews handled the take-off and landing by radio remote control. For the pre-programmed overwater section of the flight, though, personnel at Yamaha’s Unmanned Systems office – located about 800 km (497 miles) away – monitored the drone’s progress via video and other data that was relayed from the aircraft by satellite. If needed, they would have been able to take manual control. 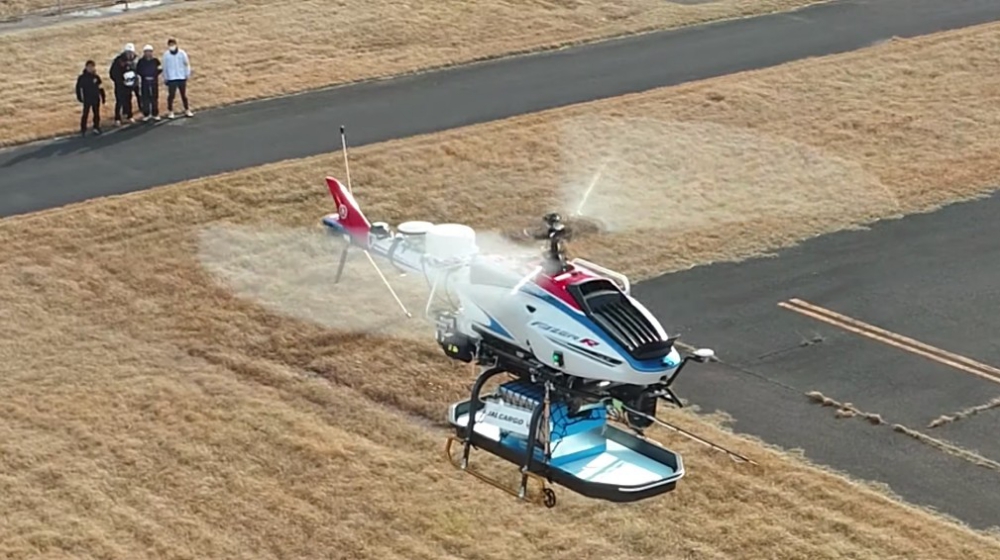 Designed for autonomous flight beyond the line of sight of its user, the Fazer R G2 is powered by a 4-stroke fuel-injected combustion engine, and can carry a maximum payload of 35 kg (77 lb) at altitudes of up to 2,800 meters (9,186 ft).