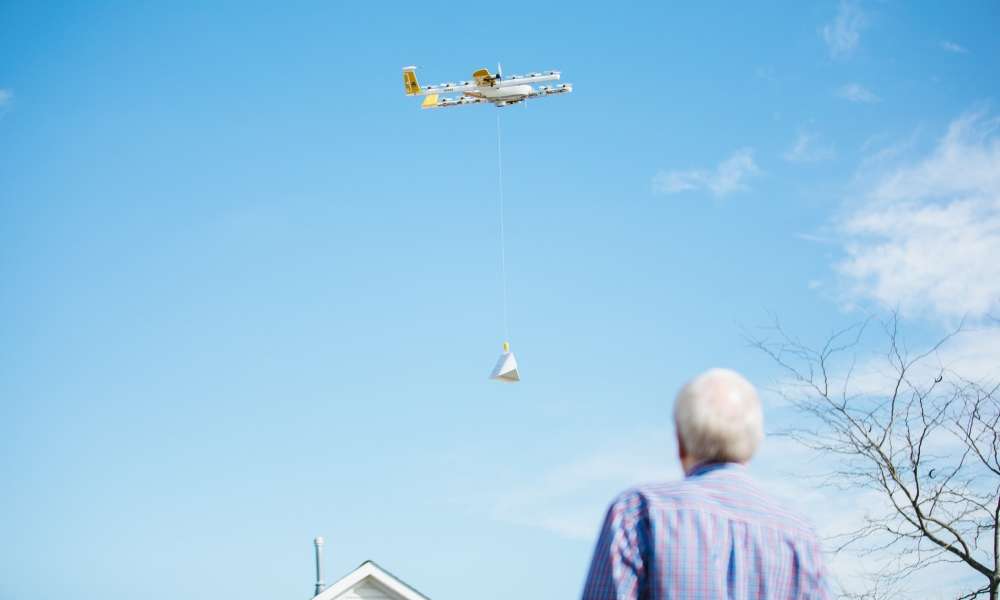 Futurist Thomas Frey has predicted that drones will become the most disruptive technology in human history. In a quiet residential neighborhood in Christiansburg, Virginia., one happens to be disrupting the work of two landscapers.

The workers silence their weed eaters, looking to the sky in wonder as the whining drone slows, descends, steadies, then hovers about 23 feet above the front yard of Paul and Susie Sensmeier, two retirees in their eighties.

The drone carries a three-pound plastic package, attached by a cord and a hook. It lowers the package until it softly touches down on the turf. The hook detaches, the line is reeled back in, and the craft zooms off into the horizon at 70 mph.

“There’s been no complaints that I know of from the neighborhood, and there’s quite a few customers that live here,” says Paul, a retired engineer who knows a thing or two about innovations in technology. His son works as an aerospace engineer, and his son-in-law is a researcher at the nearby Virginia Tech Transportation Institute. “It is the wave of the future, and it’s exciting to be a part of the developmental process.”

In fact, the Sensameirs became part of aviation history in October, when Wing, a subsidiary of Alphabet (aka Google), delivered a winter fleece vest they’d ordered from Dick’s Sporting Goods. A FedEx truck delivered it to Wing’s launching station, the Nest, and the drone brought the package the last two miles. It was the first-ever commercial drone delivery to a customer’s doorstep in the U.S. Wing has been making deliveries within a three-mile radius — the distance allowed by the Federal Aviation Administration — ever since.

Wing chose Christiansburg (population 22,500) as its first launching site for American commercial operations — it’s also testing in Australia and Finland — not only because of the relatively flat terrain and low population density, but because of nearby Virginia Tech University, a leading facility for unmanned drone research.

“This is a great place to build synergy,” says Mark Blanks, director of Virginia Tech’s Mid-Atlantic Aviation Partnership (MAAP), which played a key role in helping Wing obtain from the FAA its unmanned flight flight license to make commercial deliveries. “Most importantly, we live in this community, and we have a vested interest in making this a positive relationship.”

And there’s a lot riding on what is happening in this small Virginia town. The FAA, for one, is carefully monitoring Wing’s operation.

“The pace of UAS [unmanned aircraft system] integration will be determined by the combined ability of industry, the operator community, and the FAA to adopt a proactive, collaborative approach,” FAA spokesperson Eva Lee Ngai says in an email to Input. “We’re working to assure that drones are safely integrated into that system so our society can reap the benefits of drone technology while still allowing other airspace users to continue their traditional operations.”

Wing is currently looking at other sites across the U.S., and future partnerships may lead to coffee and restaurant deliveries, which are already happening in Australia, according to Alexa Dennett, head of marketing and communications for Wing.

The future could also lead to home services outside of the realm of retail.

“Let’s say you left your sweater at a friend’s house,” Dennett says. “You won’t have to hop in your car, pick up the sweater and go back home again. You could send a drone instead.”

More urgently, drones could prove useful in a crisis like the coronavirus pandemic. “Wing is in discussion with public officials in the communities where we operate, to see what support we can provide them at this time,” Dennett tells Input in an email. “Our technology can provide access to critical medication, food, and other necessities when limiting human-to-human contact is important, and we’re eager to help.” 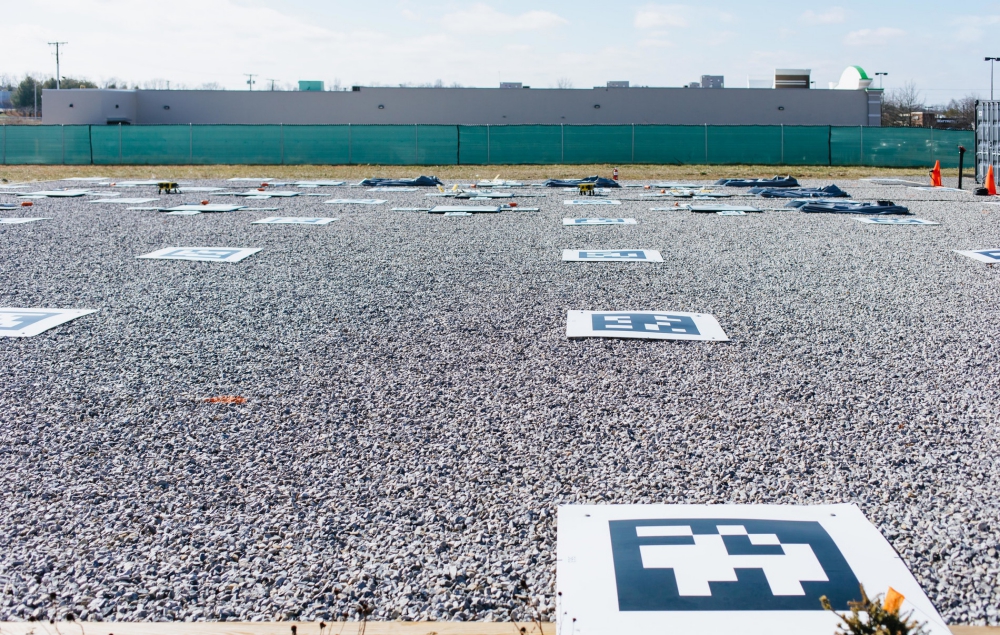 The tarmac at the Nest

Located adjacent to a commercial district full of strip malls, restaurant chains, and big box stores, Wing’s five-acre base of operations in Christiansburg is known as the Nest. There are eight trailers on the grounds. The three closest to the entrance gate are dedicated to meeting rooms and office space. The other five — cordoned off with cones and safety tape — house the drone pilots, the drones themselves, and products for delivery. There is a 50-foot-by-50-foot drone tarmac checked with 16 square tiles that the drones’ sensors use for landing. 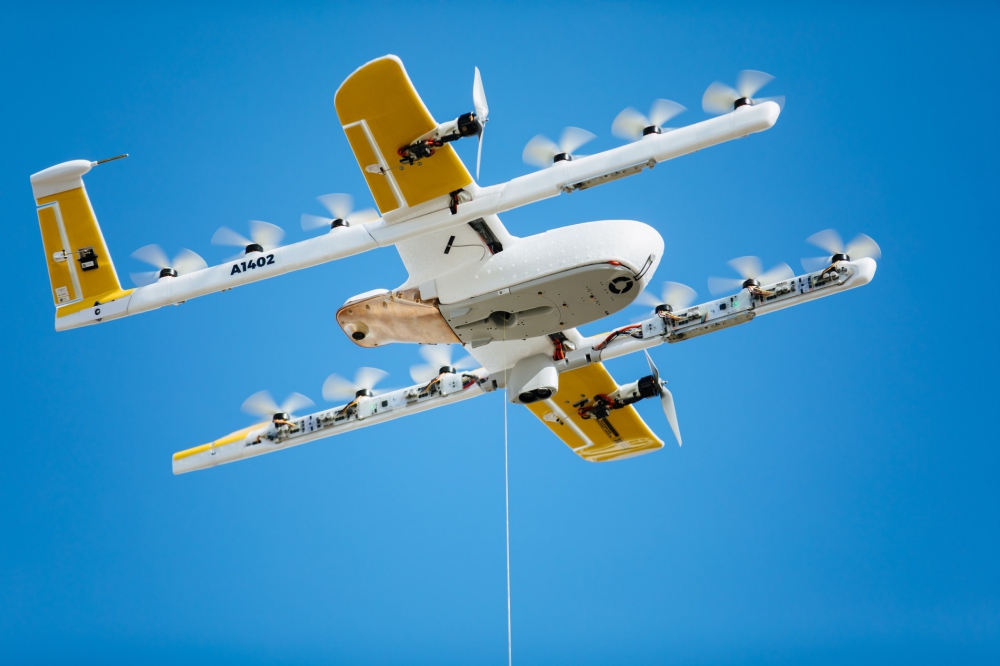 The drones themselves, the Series 7000, feature two wings and tail fins each, plus 10 rotors for lift and two that propel forward. Each drone is four-feet long, with a three-foot wingspan. Made largely of high-grade styrofoam, the drones weigh roughly 10 pounds each and are outfitted with a still-image camera used for back-up navigation in the event GPS is unavailable.

While Wing welcomed Input to the facility, it does not permit reporters to view the space where the drone pilots work. Wing also would not share how many deliveries it has made since October. It will, however, reveal the businesses it has partnered with: FedEx, Walgreens, and Sugar Magnolia, a locally owned confectionery business. Deliveries are limited to three pounds, and the participating businesses have tailored different packages to fit those constraints. One of the most popular is Walgreens’ care package for sick kids.

When an order comes in via Wing’s smartphone app, a drone resting on the tarmac ascends 23 feet and drops its cord and hook. A technician attaches the package to the hook, the drone reels it in, ascends further, and speeds towards the customer’s home. There is currently no delivery fee. 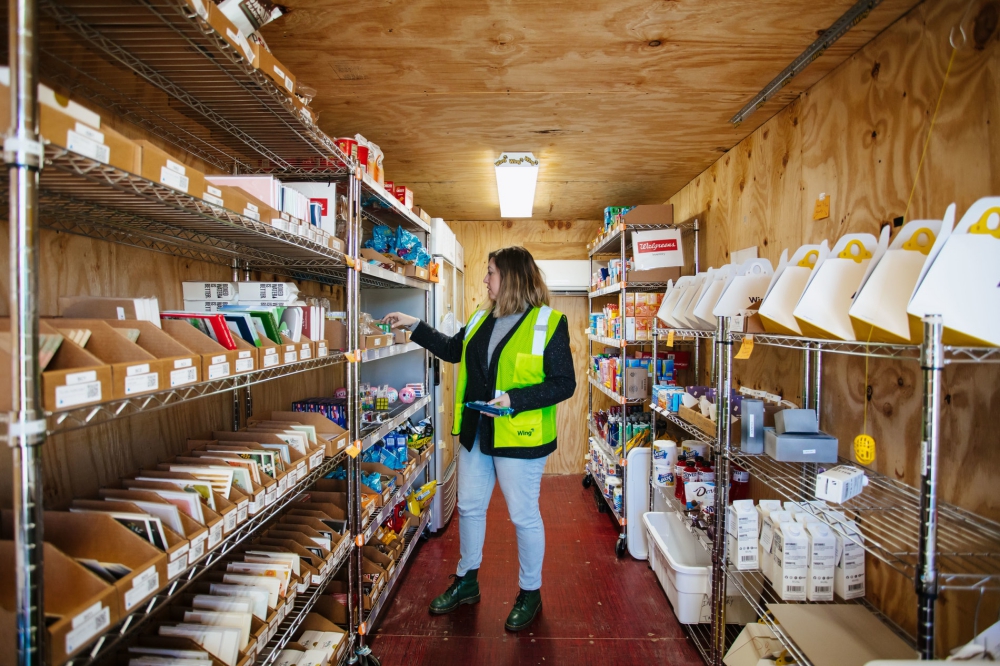 A Wing worker prepares a package for delivery

Jay Merkle, head of the FAA’s drone integration office, has said that the beginning of operations at the Christiansburg site was the point at which the industry began to walk. “Running will be when the project is scaled across the country,” he said. Wing spokesperson Dennett says the company is getting closer to running: “We are definitely seeing the tech is safe and scalable and looking to bring to more neighborhoods around the world.”

The Nest is as much a test of how the public perceives drone delivery as it is a business case test. Not everyone is sold yet.

“I think it’s more of a hype train than anything else,” says Michael Blades, an industry analyst for the Frost Sullivan consulting firm and an expert on the use of drones for defense, security, and commerce.

“After the novelty of getting something delivered from a drone wears off, is it really going to drive a need or a market when you can already get things from Amazon by the end of the day?” he adds. “Especially if you’re in a large city, which is most likely where the drones would be used in the first place.”

Meanwhile, the Christiansburg community appears to be onboard with delivery drones. Sugar Magnolia owner Tom Straub, for one, is all for them. “It feels like being a part of what the Wright brothers began,” he says.