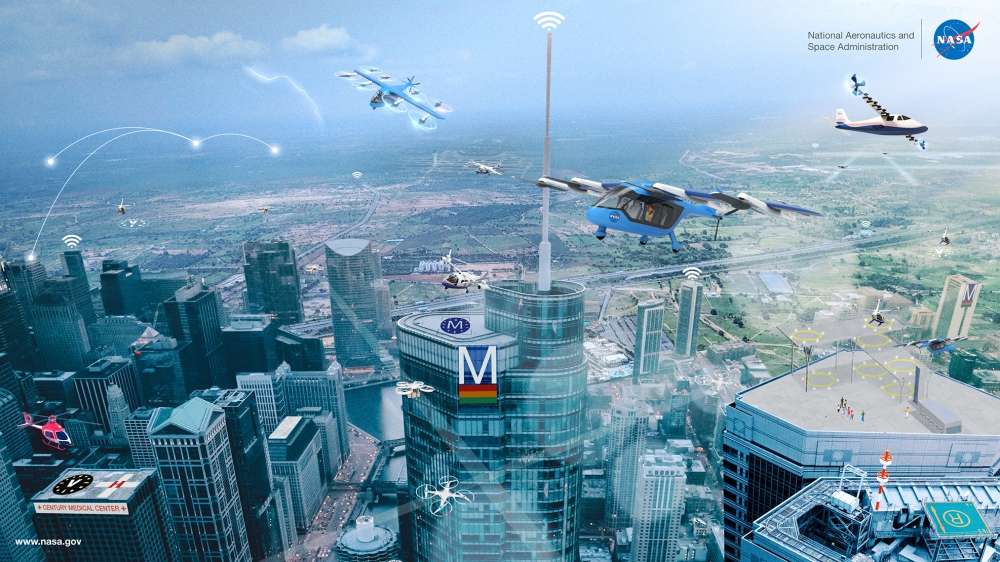 NASA’s aeronautical innovators are embracing a more inclusive vision for the future of air travel in at least one major research area, and the terminology they will use from now on will reflect that more comprehensive view of what’s on the horizon.

Bottom line: The thinking on Urban Air Mobility (UAM) has advanced so much that it was decided Advanced Air Mobility (AAM) was a better term to use.

“To be clear, in this move we’re primarily talking about updating the words we are using to describe our efforts. We are still doing UAM work, but now we consider it part of a bigger picture we call Advanced Air Mobility,” said Davis Hackenberg, NASA’s AAM mission manager.

Other than a few name changes here and there, nothing substantial has changed with NASA’s goals in this area.

During the past few years as the idea of using unmanned aircraft systems (UAS), or drones, and small, piloted electric-powered vehicles really began to, well, take off, the initial attention widely was focused on their use in the skies over dense urban landscapes.

It’s an idea that for many immediately call to mind scenes from “The Jetsons,” “Blade Runner,” or just about any planet featured in “Star Wars.”

“That’s where the early market studies showed there was a realistic potential for a high payoff on investment. Large cities offered a high population of customers using many types of services and promised a positive influence on the economy,” Hackenberg said.

“From this emphasis of flying UAS over larger cities we sort of naturally branded it Urban Air Mobility and it stuck. This was late in 2017, but it didn’t take long before we got the sense that maybe ‘urban’ wasn’t the perfect word.”

As interest in the potential of UAM exploded around the world, and NASA continued to lead discussions and host technical demonstrations with its industry partners, it became clear to everyone there was much broader interest in these capabilities. UAM-related services could benefit everyone, not just those who live in a big city.

This thinking was most recently emphasized in a recent report by the National Academies of Sciences, Engineering and Medicine entitled “Advancing Aerial Mobility – A National Blueprint.” Their decision to use the word “advanced” instead of “urban” was intentional and echoed the view that UAM is more than just for urban dwellers.

“We knew this all along, of course. UAM was never meant to be just for midtown Manhattan, but we had implemented this term and gotten used to it. Finally, we decided it was time to start talking about this in a new way,” Hackenberg said.

“Industry was telling us this, the National Academies made it clear in their report, and we were talking about it internally, so it was decided now is the right time.”

Moving forward, UAM-related work will continue as a subset to the overall AAM mission, which has defined two categories of operations based on the distance planned to be flown: local and intraregional.

Local flights will be considered as starting from any single point and then extending out about 50 miles and back, maybe a little father. While intra-regional flights will be longer flights, say from Philadelphia to New York City.

“So, our UAM work will continue in our thinking as being local, except there will be more buildings and people involved, as opposed to that starting point and 50-mile radius being in a more rural area,” Hackenberg said.

With the rethinking that led to the decision to emphasize AAM overall instead of simply UAM, a similar recasting is taking place with a previously announced series of technical exercises involving drones or small aircraft of various sizes and the future of aviation.

Say goodbye to the UAM Grand Challenge and hello to the AAM National Campaign.

“It’s still the same series of field demonstrations we’ve already announced and worked with industry and the Federal Aviation Administration (FAA) to develop. But we think the change to the AAM National Campaign is more aligned with what we want to do and already are doing,” said Hackenberg.

The idea is to demonstrate in a real-world environment the readiness of companies’ vehicles and airspace operators’ systems to fly a full range of passenger transport and cargo delivery scenarios under varying weather and traffic conditions.

The original UAM Grand Challenge took its inspiration from a series of Grand Challenges begun in 2004 and hosted by the Defense Advanced Research Projects Agency (DARPA).

DARPA’s event each time challenged industry to find a technical solution to a problem and then come to a specific place to demonstrate their solutions and prove they could meet DARPA’s need. A cash prize was offered.

As the concept for NASA’s UAM Grand Challenge evolved it began to look less like a sibling of the DARPA event and more like a distant governmental third cousin.

“When we started, we thought it would be a deal where everyone would come to our test range. It became less of a single-event Grand Challenge in one location and more of a multi-event national campaign that would take place at multiple locations over a number of years,” Hackenberg said.

Moreover, as it became clear that more and more of the technical demonstrations would involve rural scenarios as well as urban settings, it seemed a rebranding of the UAM Grand Challenge was called for in the same spirit as the switch from UAM to AAM.

And thus the AAM National Campaign was christened.

“We’re still challenging industry to come in and perform operational scenarios that would ensure UAM safety and show the public this is real and can be done. We’re just going to use a name that makes more sense” Hackenberg said.