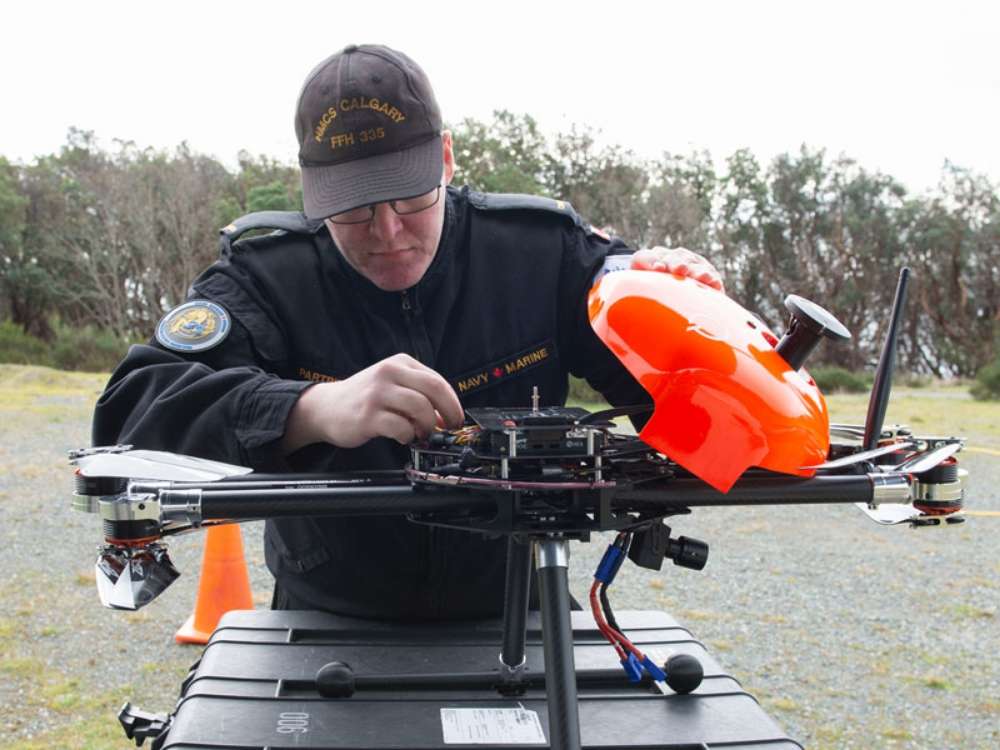 The Snyper Mk2 UAS-T is one of these systems being tested. It is designed to simulate low and slow unmanned aircraft as a threat to warships in a maritime environment.

“The intention is to train operators to fly the UAS-T for use at sea,” said Chief Petty Officer Second Class Gordon Dolbec, CANFLTPAC SO Targets. “This will allow HMC Ships to work on developing force protection tactics to counter the growing UAS threat.”

The navy has purchased 12 Snyper Mk2 UAS-Ts from QinetiQ Target Systems Canada, splitting them equally between the coasts. Eight will serve as targets for live-fire training using the ship’s weapons and sensor systems and small arms; the other four will be used primarily for surveillance and high-resolution imagery and video, a capability that was previously only available through a maritime helicopter.

Eventually, all five West Coast frigates will have someone on the ship trained to operate the Snyper Mk2 UAS-T. East Coast ships have already used them as a tool for taking imagery and video during at-sea training events.

CPO2 Dolbec says the controls and technology are complex, so extensive operational training is necessary.

“It’s all about skills and familiarity because it’s not an easy thing to fly and takes plenty of time and practice,” said CPO2 Dolbec. “When you work with someone who starts flying one for the first time, they often get nervous because it’s something they aren’t used to doing.”

The Snyper Mk2 weighs approximately 13 kilograms and has six propellers powered by six battery-operated engines. The technology is portable, with the rotors and landing gear collapsible, easily folding into a suitcase-sized pelican case.

When assembled, it can reach speeds of 33 kilometres an hour, has a maximum altitude of 18,000 feet and an overall range up to eight kilometres. However, based on the newly established National Defence Flying Orders for UAS systems, it is limited to operating below 300 feet above ground level and must remain within the visual line of the operator with not less than two statute miles ground visibility.

The UAS-T has three control components. The first is a hand controller, which is the primary flight controller, similar in appearance to joystick. It controls the UAS-T’s forward and backward movements (pitch), left and right (roll), heading (yaw), and throttle, allowing it to climb or descend.

The second is a ground control station consisting of a laptop that provides all in-flight monitoring of the UAS-T’s systems, plots flight paths, and records flight data for analysis. A third controller allows the operator to manipulate on the on-board camera for surveillance and high resolution photos and video.

To assist CPO2 Dolbec and his colleagues at Fleet Target Services West in teaching sailors how to use the UAS-T, there is a Master Seaman target manager and two sailors from HMCS Vancouver that have been loaned to the unit to be trained as UAS-T instructors.

The Snyper Mk2 UAS-T doesn’t come cheap, with each system costing approximately $21,000; surveillance units cost more because of the upgraded onboard camera equipment.

If the UAS-T crashes or has a hard landing causing damage it will be sent back to QinetiQ Target Systems Canada for repair or even replacement, which is why taking time to properly train operators and instructors is key, says Chief Dolbec.

He adds, while that may seem expensive, it is the only solution to train sailors in this warfare, and will save lives and damage to the ship.

“There are going to be some accidents that will result in damage to the UAS-T as people familiarize themselves with a capability that is very new to the RCN,” said CPO2 Dolbec. “Our main focus is to keep everyone safe, so instead of taking giant leaps forward in rolling out this capability, the best practice is to take small steps to get where we want to be in terms of training, operations and flight safety.”